Editor’s note: In an email to the Ormsby Review, freelance writer and journalist Monika Ullmann recalled that when the new Provincial Museum of British Columbia (now the Royal BC Museum) was under construction in the late 1960s, it commissioned sculptors to fill the surrounding courtyards. One of them was her husband, Peter Paul Ochs (1931-2004). Asked about his sculpture, “Story of Raven” (created in 1967), Ullmann replied:

Because the Museum didn’t put any identifying plaque on the sculpture, nobody knew what it was or even why it was there. Six large pieces of outdoor sculpture were installed at the inauguration of the Museum, but only four remain. The others got “lost” somehow. Even the curators thought it was rather strange that a Museum could misplace large sculptures. But Peter’s sculpture is still there, and the entire book began because I persuaded the Museum to finally put a plaque on the piece, almost half a century after it was installed there in 1968.

The result is Rebel Muse: My Life With Peter Paul Ochs, self-published by Ullmann and reviewed for Ormsby by Grahame Ware, who notes that this book was intended for Mother Tongue’s Unheralded Artists of B.C. series. That sensible plan collapsed “when block funding to Mother Tongue was denied by the BC Arts Council.” – Ed. 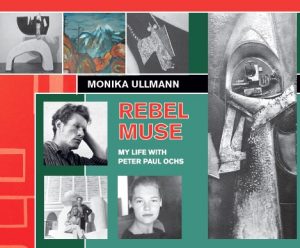 This is not your usual artist’s biography. Instead, as a memoir it intertwines the life and work of artist-sculptor Peter Paul Ochs and Monika Ullmann, his partner, wife (they married in 1959), muse, mother of his two children, and author of this book.

Ullmann is known for her biography of friend and contemporary, the sculptor David Marshall (1928-2006) — The Life and Art of David Marshall (Mother Tongue, 2008) — which provides definitive and invaluable insights into him as an artist and man.

So too with Rebel Muse. Ullmann watched the artistic evolution of her husband and Marshall as they struggled with the powerful forces they fought against, and that they rallied for in the name of art, on Canada’s west coast in the 1950s and 1960s.

The publication of Rebel Muse has prevented an important era of cultural history from vaporizing. Art really cannot speak for itself. Artistic creation has always had a specific context, which demands both a literacy and an archiving. Ullmann has once again shown her mettle as a writer in B.C. art history — and this time with herself in the narrative.

Ullmann has used her own resources, and those of her friends and patrons, to self-publish this valuable slice of B.C. cultural and social history. Originally destined for the Unheralded Artists of B.C. series with a focus solely on Peter Paul Ochs, that plan collapsed when block funding to Mother Tongue was denied by the BC Arts Council. With the project stalled, Ullmann decided that her story and voice as Ochs’ rebel muse needed to be heard. While she has included herself in the narrative, she deals squarely with her past, warts and all. Her voice, energy, and courage are central to this many-layered account.

Rebel Muse: My Life with Peter Paul Ochs is replete with historical Ochs and Ullmann family photos packaged beautifully in a smart book design and with a quality equal to the Unheralded Artists of BC series. As with her David Marshall book, Ullmann gives readers a real taste of what it was like in B.C.’s artistic and cultural moonscape of the 1950s and 1960s. Both Ochs and Marshall were working class men who augmented their art by teaching. To do public art, they had to be tenacious and gird themselves for disappointment.

Ullmann was there. She slugged it out, day after day, with Ochs and the other artists and sculptors who banged out their living in the Fraser River sawmills whilst keeping their Sisyphean dream, their boulder of art, rolling up that imaginary hill. Like Marshall, Jack Akroyd, and George Norris, Ochs’ youth and drive kept him moving forward despite the demands of his day job.

The artistic focus and energy of East Prussian-born Ochs took its toll on his relationship with Ullmann. She, of course, was left to take care of everything else in their life as part of an unwritten sexist pact that, in the post-war era, extended to these nouveau bohemian immigrants from continental Europe. The irony, of course, is that Ullmann’s hard-earned skill as a writer in what was not her mother tongue – she gained a B.A. in English from Simon Fraser University in 1978 — allowed her to create, eventually, first person narratives of the art world of Ochs and his friends.

For Ochs and Ullmann, his teenage bride, life on the west coast of Canada proved to be liberating after the tremendous personal losses and turmoil of World War Two. Life in Canada allowed them to make a living, have a family, and enjoy the relative stability of postwar B.C. But it was never easy. Art in this era (and others) made for a fickle lover and an even icier taskmaster: a Siren that whispered alluringly in their ears and made them do things to undermine their long-term security. They devoted their lives to changing B.C.’s cultural landscape. Their choice was visceral and somewhat crazy, but then again, devotion often is:

Together, we worshipped at the shrine of Art, and I dare hope that telling our story will lead to a renewed appreciation of the artist Peter Paul Ochs, painter, sculptor, draughtsman, photographer and, architect manqué. As his wife and conflicted Muse, I was torn between that role and my restless urge to become a separate individual with my own creative aspirations as a writer.

Despite an often stormy and conflicted relationship, which ended in divorce after 22 years, Ullmann and Ochs come off as quietly heroic and intellectually engaged. Their lives together contained some wonderful moments. A textured portrait of artist and muse, husband and wife, and parents of two, Rebel Muse is a must read for everyone interested in West Coast postwar social and art history. It includes the ideas and ideals that forged the imagination of Ochs and his artist friends, including the rise of the environmental movement, feminism, and renewed interests in Canadian identity and Indigenous mythology.

It offers glimpses of the creative crucible of Peter Paul Ochs through the compassionate yet discerning eyes of his rebel Muse. Ullmann’s gaze is well worth experiencing.

Grahame Ware is a writer and carver on Gabriola Island. He studied creative writing and communication studies at Simon Fraser University. As a feature writer, often under the Buzz Ware handle, he has been published in Georgia Straight, Vancouver Magazine, TV Week, TV Guide, and Toronto Star, and he had shows on CBC radio, CKVU-TV, and CO-OP radio as a freelance broadcaster and producer. He worked with Ken Smedley in performing plays by George Ryga, Sam Sheperd, and George F. Walker in the Okanagan. He taught ornamental horticulture at Okanagan College, made a living as a landscape contractor and rare plant nurseryman, and spent three years as editor of the Alpine Garden Club of B.C. With Dan Heims, he is author of Heucheras and Heucherellas: Coral Bells and Foamy Bells (Timber Press, 2005), and has contributed articles to the International Rock Gardener, The Rock Garden, and The Plantsman. For nearly a decade he has dedicated himself to creating gongshi sculpture with cured driftwood and dried wood as his medium. See www.phantasma.ca for his wood sculpture and related subjects.