Born into a wealthy manufacturing family in Durham, England, in 1868, and educated there, Julia Henderson came to Canada in 1884 with her sister and brother-in-law. They settled in Montreal, where Julia married broker and merchant Charles Henshaw in 1887. In 1891, she and Charles moved to Vancouver with their daughter, Doris.

While Julia had begun her journalism career in Montreal, contributing to the Montreal Daily Star, it was in B.C. that she made her mark. Starting in 1898, she wrote for the Province newspaper, and for almost ten years ran the weekly women’s section of the Vancouver Daily News-Advertiser. She also wrote articles for the Vancouver Sun, Canadian Magazine, and the Canadian Alpine Journal, as well as two novels and guides to the alpine plants of the Rocky Mountains, illustrated with her own photos.

Henshaw mapped part of Vancouver Island, where a creek flowing into Buttle Lake is named after her. She was a founder of the Alpine Club of Canada and participated in (and served on the executive of) so many other organizations of various kinds that they can’t possibly all be listed here. Julia Henshaw died in Vancouver in 1937. In 1924, she was vice-president of the B.C. section of the Canadian Society of Authors. An article by Marianne Ainley in the Dictionary of Canadian Biography provides a comprehensive and concise description of her life.[1]

One of the features of Julia that I appreciated as a researcher of women’s history is the Prelude to the book in which Kluckner describes his quest for information about Julia Henshaw. And it truly was a quest, spanning decades, in which he combed through microfilmed newspapers, visited museums and archives, and conducted interviews. All of this is revealed through illustrations and narrative in the same engaging style as the main part of the book.

Kluckner is lucky in his subject. Julia Henshaw was widely published, both in her own name and under her known pseudonyms – Julian Durham and Gwen — and her very public life was covered by newspapers. This contrasts sharply with the challenges of researching most women of her vintage.

While Henshaw’s journalism career was impressive, what truly makes her stand out is her array of botanical publications, developed through extensive study and fieldwork. Kluckner draws her in the field and reveals the tensions with fellow naturalist, the American artist, “mountain enthusiast,” and writer Mary Schäffer (1861-1939).

While Kluckner clearly admires Julia’s spirit, talents, and sheer chutzpah, he also acknowledges his own dismay at discovering her to be anti-suffrage, a forceful British imperialist, and not immune to the racism of the age. He counters his reactions with interventions from Julia herself, or more precisely, her ghost. A swirling spirit of Julia commands, “Don’t judge me with your modern values!” and declares, “This is my biography!” (p. 79). Julia’s spirit offers commentary several times in the book, adding another layer to the story.

Julia’s experiences in the First World War were of special interest to me, as I have researched and presented about Canadian nursing sisters and the women of the Canadian Field Comforts Commission. I was intrigued by the reference in a 1915 article from the Vancouver Daily World to Julia wearing the uniform of a captain in the Canadian Expeditionary Force (the Canadian army in the First World War) (p. 89). In the Great War, women could not enlist in the Canadian army, other than in the Canadian Army Medical Corps, but it seems Julia managed some form of special appointment by means of a direct, in-person appeal to General Sam Hughes, Minister of Militia and Defence.

Kluckner includes a report in his Afterword that Julia was in the Canadian Field Comforts Commission, but that’s the only reference I’ve been able to find for her affiliation to that group. No attestation paper exists for her online, which tends to support the suggestion that hers was a more independent approach to service, despite her designation as “Captain.” Kluckner’s detailed descriptions of her forays to the front, inspecting Canadian hospitals and working with French refugees, are thrilling.

For all that I ultimately enjoyed this book, I have to admit to having difficulty at first in engaging with it on two levels: the accuracy of the content and a specific aspect of the design. Labelled a biography, a more accurate description would be a graphic novel based on the life of Julia Henshaw. While it does present the major events of her life, woven throughout are fictional elements — imagined thoughts, conversations, events, people — that take it far outside the realm of a conventional biography. The portrayal of Julia’s thoughts enhances the images of actual events, but the introduction of several fictitious events seemed unnecessary and, for me, detracted from the enjoyment of the story.

At one point, Julia is shown in bed, being treated by a doctor for puerperal (childbed) fever after the birth of her daughter (p. 13). The doctor tells Charles that “it is unlikely she’ll be able to bear more children.” The author himself is shown in the next panel explaining his decision to make up that entire episode as an explanation as to why Julia and Charles had only one child. The author asks, “Why else would they have had only one child….” 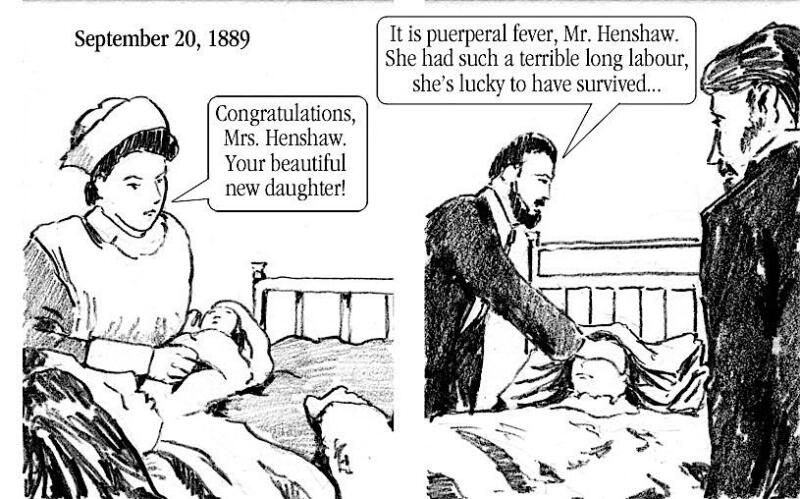 Actually, there could be many reasons (e.g., endometriosis, fibroids, thyroid, decrease in Charles’s fertility). While I disagree with the need to introduce a dramatic event like childbed fever, I liked the way the Kluckner acknowledged right there, on the page, that it’s fictitious, as he does when he introduces the imaginary character of Kurt later in the book (p. 62).

However, it turns out other events (e.g., the meeting with Churchill, p. 105) are fictitious as well, but that is only revealed in the Afterword. Kluckner’s inconsistency in acknowledging what’s real and what isn’t was a source of frustration for me.

Time for full disclosure: I am not an aficionado of graphic novels. The ones I know of — Riel, Maus, and Persepolis — follow a conventional comic-strip style. Julia is much more “free form,” with various sizes of images interspersed on a page. I much prefer Julia’s to the conventional style, so much so that it led me to Kluckner’s other two graphic novels, Toshiko and 2050, published by Midtown Press in 2015 and 2016, which are just as beautifully illustrated.

But one aspect of Julia’s design detracted from that enjoyment: the large number of reproduced newspaper articles in their original form. At his keynote address to the B.C. Historical Federation conference in May 2018, Kluckner spoke about using new media to present history, with Julia as a model. He noted how delighted he was to have access to old newspapers online and how much he enjoyed reproducing clippings from them.

However, in Julia, the clippings at times overpower the story and can be confusing. Sometimes they seem to be merely design elements that can be skipped over, while in other places they are essential to the narrative, which the reader might not realize right away. Through her own journalism and the news coverage of her very public life, Julia Henshaw provided Kluckner with a huge amount of newsprint. I understand the temptation to use as much of it as possible, but in places the clippings seem to swamp the narrative.

Neither of these concerns takes away from Kluckner’s achievement in bringing to life one of B.C.’s most remarkable women in ways that a conventional biography would not. Kluckner might well agree with Julia’s ghost, who at one point says “Writing history is about giving the past its voice.”

Julia Henshaw’s forceful voice had been stilled through the years but comes out loud and clear in this delightful work.

Yvonne Van Ruskenveld is a Victoria writer, editor, and historian who has been fascinated by local history since arriving there in 1990. As a long-time member of the Old Cemeteries Society, she has presented tours on a wide range of topics including women’s history, the B.C. gold rushes, symbolism, and epitaphs. She is also a member of the Victoria Historical Society and the Pacific Coast Branch of the Western Front Association, which focuses on the history of the First World War.