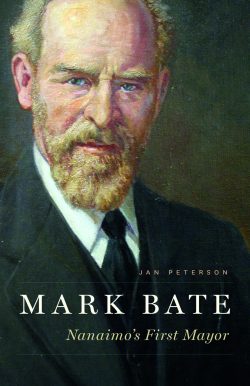 While industrialist Robert Dunsmuir has long been recognized as the most important figure in nineteenth century Nanaimo, thanks in part to Terry Reksten’s The Dunsmuir Saga (Douglas & McIntyre, 1991), Jan Peterson makes a strong case that Dunsmuir must now share the spotlight.

Reviewer John Hinde points to Bate’s devotion to the life of his community, to his remarkable sixteen terms as mayor of Nanaimo between 1875 and 1900, and to his “more socially progressive vision” than Dunsmuir. — Ed.

On January 17, 1857, after a grueling five-month voyage that took them from Britain, around Cape Horn, and up the Pacific coast of the Americas, the nineteen-year old Mark Bate, along with sister Elizabeth, cousin Cornelius Bryant, and aunt Maria Robinson, finally stepped ashore at the tiny settlement of Victoria on the southern tip of the Colony of Vancouver Island.

But this was not their final destination. Twelve days later, after being feted by notables of the Hudson’s Bay Company, including the young colony’s governor, James Douglas, they embarked ship once more, this time for a much shorter journey along the east coast of Vancouver Island to the small coal-mining hamlet of Nanaimo.

Mark Bate’s later reminiscences – printed in the Nanaimo Free Press in 1907, on the fiftieth anniversary of his arrival — captured the hope of a new life and uncertainty that confronted him:

Rounding Light House Point, now known as Jack’s Point, a glimpse was obtained of the clean, whitewashed row of homes standing on a rising eminence a little way from the water front, the grassy slope between the buildings and the harbour, looking as fresh as spring, the towering peak of Wakesiah mountain under heavy cloud, and the intervening tall timber, formed a somber looking background, giving the place just then a rather weird aspect (pp. 42-43).

Bate’s story, deftly told by local historian Jan Peterson, is in many respects the story of early Nanaimo. His arrival in Nanaimo marked the beginning of a new life’s journey, one that would shape the destiny of the Island’s second city. Bate was drawn to the edge of Empire by a promise of employment from his uncle, George Robinson, with the Hudson’s Bay Company’s mining operations in Nanaimo.

The transition from the Black Country mining town of Dudley, in the heavily industrialized and populated West Midlands, to the wilderness of Nanaimo, with a population, not including the Snuneymuxw, of 132, cannot have been easy, yet the young man quickly established a place for himself in the Company and the growing community.

Work, family and community service drove him. His service to the community is rightly emphasized by Peterson. Bate was involved in a host of social, cultural, and economic organizations and, most significantly, was Nanaimo’s first mayor, serving a remarkable sixteen terms in office.

As mayor, Bate played a decisive role in establishing the town’s administration and infrastructure and in guiding Nanaimo’s future development. As long-time manager of the Vancouver Coal Mining and Land Company, he also played an important role in the early industrial development of the Island. In many respects, this is Peterson’s most compelling discussion. Bate’s relationship with his friend and, ironically, arch-rival Robert Dunsmuir, stands out, and reflects the different economic and political philosophies of the two men.

Whereas Dunsmuir embraced the radical individualism of the frontier capitalist who despised unions and fought hard against his workers, Bate, accountable to shareholders in London, offered a more socially progressive vision, sought accommodation with his employees, and devoted his life to his community. It is unfortunate, perhaps, that Bate’s progressive legacy is overshadowed by that of the Dunsmuirs’.

This isn’t a narrow, parochial biography. Well known as the author of numerous works on Nanaimo’s history, Peterson expertly explores the history of Nanaimo through the lens of Bate, documenting the social, political, economic and cultural development of the region isolated by geography, and has succeeded in placing Bate and Nanaimo in the broader social and economic context of British Columbia, Canada, and of the British Empire.

This study of Mark Bate fills an important gap in the story of early Nanaimo, and Jan Peterson has done a great service to him and the region’s history.

While Peterson may be exaggerating when she claims that Bate was a “Renaissance Man,” Bate was nonetheless a man of varied talents, and he left his stamp on the young city of Nanaimo.

A well-written and engaging popular history, this book is a very compelling companion to the author’s many other works on the history of Nanaimo and Vancouver Island. 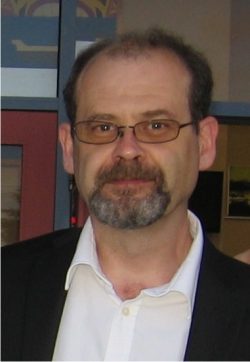