Garden of Words
by Pnina Granirer 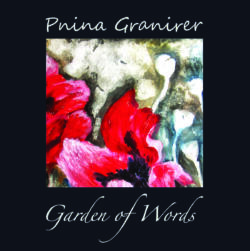 is an internationally respected artist and writer, living in Vancouver. Born in Romania in 1935, she later moved with her family to Israel where she studied at the Bezalel Art Academy in Jerusalem. She also spent time in France and the US before moving to Canada in 1965. In her memoir, Light Within the Shadows: A Painter’s Memoir (Granville Island Publishing, 2017, reviewed here by Janet Nicol — Ed), she documents her life’s journeys, addressing themes of dislocation through “the power of an artist’s ceaseless investigation of the world without and within.” In the memoir’s forward, it describes her work as “an enduring expression of the search for beauty and spirituality.” Her work has been featured in two other books: her own Trials of Eve and Portrait of an Artist, by Ted Lindberg.

In 1993 Pnina co-founded the on-going “Artists in Our Midst” program in Vancouver with the first open studios walk taking place that year. It was on one of the artist walks when my sister visited Pnina’s studio and later gifted me with her mix-media painting entitled The Search, which was part of “The Cannibal Bird Suite” featured at an exhibition at The Burnaby Art Gallery in 1982. How lucky I am to have this hauntingly beautiful painting! I have been fascinated by her work as an artist and writer ever since.

Her new book, Garden of Words is a beautifully designed and presented volume with colour plates — fitting for an artist — accompanied by poems arranged in five thematic chapters. Edited by Kyle Hawke and designed by Omar Gallegos, the book’s dimensions (7”x 7”) as well as the chosen script fonts are very fitting and convey the intimacy of the book’s content. This combination of poetry and visual art provides a unique glimpse into the artist’s creative process and takes the concept of ekphrastic poetry to a new level. Poems and paintings here are inseparable, sharing conversations between visual imagery and theme. Yet both art forms stand alone in the book as companions from the artist’s vision and voice.

The book begins with a translation of her first poem, written when she was ten years old on Victory Day in Romania. Poems for Pnina began at an early age, she tells us, with long pauses when they were absent. “Unexpected and unplanned, like small gifts offered by a kind friend, poems have been forming in my head ever since I was a child.” In her poem “Garden of Words”, she begins by declaring, “I am a painter”, yet “words/ are instruments of power/ woven threads of sound/ binding the loose pages of our lives.” “I should so like to plant/a garden of words/in my field of colours/…”.

Opening with her Preface, followed by her childhood poem, “May 9, 1945”, and her title poem “Garden of Words”, the book then continues with Chapter 1, Sea and Stones. Her exquisite drawings of sandstone formations found on the west coast’s Gulf Islands were created in the mid-1980s. The poet also speaks on related themes in poems such as “Eternity”, “Lessons of the Sea”, and “The Whispering of Stones”. Her stones become metaphors layered in the lines: “The meaning of eternity/ lies at my feet.” “Polished stones /smooth eggs/ of soft greys and fleshy pinks/ nurtured by the waves/ never to hatch/…” “Eerie sight of stones/ becoming bones/ shapes fit for dreams./…”

Chapter 2 opens with the palpable poem titled “Plague”, lamenting the Pandemic and its dire effects on the city and the artist. Isolation, lockdowns, “…vacant streets/ abandoned stores closed tight/ an empty set/ waiting for actors to appear.” Yet her garden is always there, she reminds us, and all is well “where daffodils and tulips, spring flowers/ bloom….” Paintings in this chapter appear from various time periods, including In the beginning, a lithograph from 1978, and Stillness, a mixed media on canvas from 2011. Her poem by the same title reminds us, “It is unknown/ how long the fear will last. / All is still.”

Chapter 3 moves us into the animated world of dancers, featuring a monoprint called Leap (from 2002), and a poem accompanying a mixed media piece, featuring Cori’s Dance. Pnina, through the studied strokes of her brush, has captured the dancers on mylar, where “a figure comes to life/…/ Raising her arm/ she floats in space/ frozen in time?”

“Memories of Spain” is the title for Chapter 4. Pnina shares a vivid prose narrative in “Granada”, where she witnesses the procession and celebration of the ‘Reconquista’. “Witnessing this event rich in pageantry and colour with its sinister overtones,” she writes, “one cannot but think that the pagan religions have won, after all.” The chapter also includes four poems that capture the artist’s observations from her time spent in Spain. Granada ends with the insight that “the true, hidden victory belongs to the pagan Goddess.” Her mixed media painting, Windows, closes the chapter.

Chapter 5, titled “This and That”, contains a variety of themes with poems ranging from the forest to the city, the soul and incantations for a magic circle, a Zen Garden and a poetic meditation on the colour red, so beautifully paralleled in her mixed media painting, Poppies with Pods. The pressing question of identity is explored in her final prose poem, “Questions of Id-Entity”, with stanza headings such as Migration, Dislocation, Relocation. “Where do I come from — who am I — where am I going?” she asks. Earlier stanzas address creatures such as crows, lions, the elephant. “The sky darkens as a murder of crows, wings flapping, their shrieking resonating through the quiet evening in a cacophony of raucous sound, fly over the trees.”

The book closes with a poignant elegy for her husband and lifetime companion, Eddy, who passed away after sixty-six years of marriage. She includes a charcoal drawing of him, simply titled Eddy studying during power outage, 1957. Her enduring love resonates through the lines of her poem and the charcoal drawing.

This well curated combination of paintings, drawings, and poems offers a deeper look into the artist’s life. Much like an imagined visit to her studio, and an intimate conversation over tea, with poppies blooming and forest creatures looming, I am much closer now to the power of Pnina’s prolific oeuvre through reading this beautifully produced volume.

Diana Hayes was born in Toronto and has lived on two coasts of Canada. She received her BA and MFA in Creative Writing from UVic and UBC. Her six published books including Gold in the Shadow (Rainbow Publishers, 2021), Labyrinth of Green by Plumleaf Press (2019), and This is the Moon’s Work (Mother Tongue Publishing, 2011). A new poetry collection, Sapphire and the Hollow Bone, will be published by Ekstasis Editions in 2023. Deeper Into the Forest, a spoken word/music CD, was produced at Allowed Sound Studio in 2020 with musician and sound engineer, Andy Meyers. Her poetry was included in the anthologies Rocksalt, Forcefield, 111 West Coast Literary Portraits, Love of the Salish Sea Islands, Sweet Water: Poems for the Watersheds, YCC-POP — Poetic Portraits of People (edited by Sheri-D Wilson for Frontenac House), and Poems in Response to Peril (edited by Penn Kemp & Richard-Yves Sitoski). She recently launched Raven Chapbooks, an indie publisher for small edition poetry chapbooks. She has lived on Salt Spring Island — the traditional and unceded territory of the Hul’q’umi’num’ and SENĆOŦEN speaking peoples — since 1981. Editor’s note: Diana Hayes has also reviewed a book by Luanne Armstrong for The British Columbia Review, and her book Gold in the Shadow: Twenty-Two Ghazals and a Cento for Phyllis Webb (Rainbow Publishers, 2021) is reviewed by Isabella Wang.