The Woo-Woo: How I Survived Ice Hockey, Drug Raids, Demons, and My Crazy Chinese Family
by Lindsay Wong

Editor’s note: this review was first published in The Ormsby Review in January 2019. Somehow it disappeared when material was transferred to the new Ormsby site in May and June 2019. Apologies to the reviewer, author, and publisher — and thanks for your patience.

Meanwhile, The Woo-Woo has won the Hubert Evans non-fiction prize, was a finalist for the CBC’s Canada Reads, and has now been on the BC Bestseller for 32 consecutive weeks — Ed. 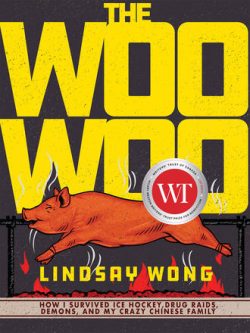 Everything is true to my memory of the weirdo happenings of my life – Lindsay Wong.

The “weirdo” happenings of Lindsay Wong’s debut book are reflected in the title, The Woo-Woo: How I Survived Ice Hockey, Drug Raids, Demons, and My Crazy Chinese Family. Like a scholarly monograph title, it reveals all the key elements. As well, it’s a draw to a curious reader: the Woo-Woo.

With the location set in Greater Vancouver, the reader shares Lindsay Wong’s earliest memories from the age of six up to her time attending Columbia University in New York, when she believes she has become afflicted with her family’s predisposition to the Woo-Woo, that is, “ghosts.” There is nothing that one might say is typical about Lindsay’s upbringing, whether her neighbourhood, home-life, family, or childhood activities.

On the surface, her family appears like many others. Lindsay joins an AA hockey league; her family enjoys going to the mall and the food court, shopping at Costco, and RV-ing. Yet, for most, the details are unlike anything the majority will experience. For example, hockey isn’t quite the rough and tumble expected of a peewee tournament. In her need to please her family, to be competitive, Lindsay is “over the top”: “I charged a girl centre ice and attacked ferociously, cracking the fleshy back of the girl’s lower leg with my stick. […] we both knew something had gone very wrong. She dropped” (pp. 64-65).

Why such ferocity? Lindsay did not want to be deemed a “loser” in her father’s (aka “Confucius Gentleman”) eyes. As well, when young, what is normal, or how do you know that you are not to blame when a family member, her mom (aka “Quiet Snow”), has a mental breakdown. “If you won all your hockey game, she’d have stayed. No one like to watch loser” (p. 60).

Throughout the book, the violence depicted and the rawness of the language disrupt. One feels the pain of being in a whirlwind of another’s trauma as Lindsay and her family attempt to cope. As Lindsay notes, her mother “had a fourth grader’s English vocabulary and loved swear words […] Yet, she’d never cuss in Chinese, arguing that it was repulsive” (p. 23).

I’m not immune to hearing or using the occasional swear word; however, the continual exhortations by Lindsay and family members, jolted me as the reader. “God, what the fuck is wrong with you? You want to know why I’m a fucking mess? You raised me! I’m exactly like you!” (p. 201). “`Why are you so fucking pathetic?’ my mother, shrunken and terrified, had screamed at her sister any chance she got” (p. 251).

Quiet Snow’s terror lay in fearing for her sister, as well as her family in general. This fear, as the reader learns early on, is the Woo-Woo. “[M]y crazy Chinese family, who were still exorcising fake demons — the Woo-Woo—they called them […] This was normal in our family, who believed that mental illness, or any psychological disturbance, was caused by demonic possession. The Woo-Woo ghosts were sometimes responsible for cancers, unexplainable viruses, and various skin afflictions like mild psoriasis” (pp. 13-14).

Within this telling of Lindsay’s life is a cry of and for love and affection. Her words reflect her evolving self-awareness that her mother’s expression of love is not of the “warm and fuzzy” variety. “For my mother, who was so disappointed that she hadn’t gotten to meet my ghosts, which meant she had failed in her duty to protect me from demonic possession […] Behind her anger was terror. It was all a projection to seem strong. I still didn’t quite get that as a teenager” (p. 162). Quiet Snow tried to “barbecue” Lindsay’s foot to get her out of bed (p. 84), which does not reflect a typical act of motherly love. Yet, the reader sees that Lindsay does matter when Quiet Snow manages to fly to New York City, even though she is horrified at the thought of flying, without even considering the multitude of “ghosts” present in NYC (p. 267), to bring her daughter home.

Ultimately, The Woo-Woo is a story of remarkable resilience, filtered through a Canadian family’s lens of Chinese beliefs and traditions. Though Lindsay’s story is framed within the context of the Woo-Woo, “ghosts” have populated the fiction and non-fiction of other Chinese Canadian and American authors. For many who are ethnically Chinese, they will recognize and possibly even celebrate the Hungry Ghost Festival on the 15th day of the seventh moon (see Good Luck Life: The Essential Guide to Chinese American Celebrations and Culture, Gong 2005). This is Lindsay’s “Chinese Hell Month” (p. 153). The month is to acknowledge the dead, and as Lindsay describes, hell notes and paper representations of everyday items are burned “to appease our ancestors in the afterlife” (p. 165).

As suggested in The Woo-Woo, there are good and bad ghosts – and many of them. As described in The Jade Peony (Choy 1995), “spirits and ghosts were everywhere because the Chinese were such an ancient people; so many Chinese had died that their ten-thousand million ghosts in Old China […] lived constantly alongside them” (p. 178). With so many ghosts, the terror felt by Lindsay’s mom can be understood. As well, she felt that Lindsay “was especially vulnerable to demonic possession. […] I did not realize then that this was the only way she knew how to protect me” (p. 166).

In a similar fashion, in Judy Fong Bates’ Midnight at the Dragon Café (2005), Su-Jen’s mother, Lai-Jing, also acts on her beliefs, in this case, her concern to protect her daughter from water. “She told me that until the age of thirteen, water would be my danger sign, that I was never to trust it” (p. 3). What Lai-Jing feared was the ghost of the drowned. This dread is found in an early example of autobiography by Chinese American author, Maxine Hong Kingston. In The Woman Warrior (1976), the suicide of Kingston’s aunt haunts her: “The Chinese are always very frightened of the drowned one, whose weeping ghost, wet hair hanging and skin bloated, waits silently by the water to pull down a substitute” (p. 16). It’s a story that I even heard when growing up. The fear is repeated in The Woo-Woo: “She was scared a ghost would pull her under and never went in water higher than her knees” (p. 100).

Although Lindsay’s family is idiosyncratic, certain aspects of her story play upon a stereotyped view of Chinese Canadians. Her family was part of a wave of highly educated immigrants in the 1980s and 1990s; her father was an engineer (p. 33) and the family could choose where to live. This was unlike the earliest Chinese migrants and immigrants who had limited education, if any; worked frequently as labourers; and were ghettoized in Chinatowns. The earliest documented Chinese in “Canada” were craftsmen who accompanied John Meares on his 1788 expedition to Nootka Sound, followed by a major influx during the 1858 Gold Rush. Those who came during the first half of the 20th Century were primarily from the Pearl River Delta, Guangdong Province (see Celebration: Chinese Canadian Legacies in British Columbia, Cheung et al 2017: pp. 28-29). Since then, Chinese Canadians have become increasingly heterogeneous in terms of social class and origins, hailing from Hong Kong, Taiwan, Singapore, and elsewhere.

Such diversity of class and origins needs to be emphasized as it brings differing attitudes and perspectives to Canadian life. What does it mean to be Chinese in Canada or Chinese Canadian? In that sense, without considering Lindsay’s rather unique family, her commentary reinforces for some — who might share an anti-immigration position — that there are “too many” Chinese in Greater Vancouver. In her thinly disguised place names, Hongcouver is one that makes me cringe. As noted by Miro Cernetig (2007), Hongcouver “was an era’s impolitic catch-phrase for the xenophobia and palpable occidental unease in Vancouver.”

Cernetig also references “University of a Billion Chinese,” which Lindsay adopts for the University of British Columbia (p. 175). The terminology reinforces foreignness rather than Canadianness. Her usage is a reminder that in 1979 W5 screened a documentary, Campus Giveaway, which wrongly implied that the Asian faces shown were those of foreigners “taking over” (Craven 1980). In 2017/18, 25 percent of the total student body at the University of British Columbia (both campuses, Vancouver and Okanagan) is international, representing 156 countries (UBC 2019).

Lindsay acknowledges early in her memoir this fear of foreigners, specifically Chinese, among the white community: “Many of the white families moaned about the ‘Asian tsunami’ that had flooded their community and lamented the neighbourhood’s terrific ethnic decline into ‘Chinky Chinatown’” (p. 41).

How long does a family need to be in Canada to be perceived and/or acknowledged as Canadian? When I hear “Chinese” bandied about in conversation, is the person speaking of someone who is a national of China, or someone who looks like me, whose grandfather immigrated from China to Canada in 1890? The choice of Hongcouver and University of Billion Chinese homogenizes those of us with Asian features. “We” appear as a monolithic group. We are not.

Likewise, The Woo-Woo represents Lindsay and family. It is not representative of Chinese Canadians, nor Chinese in Canada. In responding to mental illness, her family did what they could. “I thought I was not equipped to handle the outside world. I finally understood why my parents rarely left the safety of our fenced-off aquarium, and why they only vacationed at the outlet mall in their RV” (p. 196). Their coping mechanisms “worked” for them; they were managing — they were surviving.

Mental illness is not an easy topic to tackle. By exploring the Woo-Woo with her readers, Lindsay comes to understand herself and her relationships between family members. In putting all the pieces together, Lindsay reconciles her lived experience to become the writer she is today. As noted by Robert Frost, “The best way out is always through.”

A descendant of Cumberland and Vancouver’s Chinatowns, Dr. Imogene Lim is an anthropologist (BA Hons, Simon Fraser University; AM & PhD, Brown University) at Vancouver Island University, where she teaches Anthropology and in the Global Studies Program. As a field language, she learned to speak Swahili. For the past two decades she has focused her research interests on Vancouver Island — ethnicity in Canada and Asian Canadian history. In this regard, she has served on the BC Legacy Initiatives Advisory Council (in response to the Chinese Historical Wrongs Consultation Final Report), the BC Chinese Canadian Community Advisory Committee, Working Group-BC Chinese Canadian Museum, and the Coal Creek Historic Park Advisory Committee (Cumberland). She is a founding member and former Board Director of the Chinese Canadian Historical Society of BC.