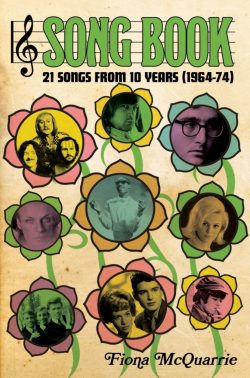 It’s been said that if you remember the 1960s you weren’t there. Well, I do, and I was. And like many others of my generation, the music of that time was a massive part of who we were. New bands, new singles, new albums were erupting from speakers big and small on our favourite AM — and increasingly, FM — radio stations. If you owned a car, it was not unusual to pull alongside another vehicle at a stoplight and hear the same song emanating from both. Smiles and peace signs would be exchanged, and then both cars would continue on their separate journeys. The music was a uniting force.

In Song Book: 21 Songs From 10 Years (1964-74), Fiona McQuarrie chronicles the inside story of fourteen songs from the 1960s and seven from the early 1970s. She digs deep into the history of those twenty-one compositions and takes the reader on a personal journey of discovery — frequently surprising, always musical. Each song’s long strange trip is traced from creative inception through studio production and on to release. McQuarrie details each tune’s historical impact (or lack thereof), and the trials and tribulations involved in getting lyrics and music from paper to vinyl (with the occasional lawsuit adjusting the “written by” credit). That would be enough content to whet any appetite for subject matter such as this, but there’s more. She reveals why some songs — many that were under-appreciated when initially released — found themselves re-recorded and released years, sometimes decades later; some even became hits by well-known artists. 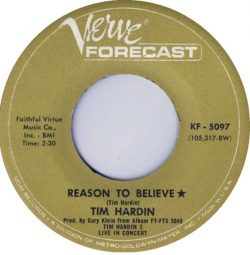 Tim Hardin’s original song, “Reason To Believe,” written and first recorded in 1966, is a good example. Hardin, who also wrote, “If I Were A Carpenter” (he sang both songs at Woodstock), never seemed to crack the “hit” market with any of his songs. But many were covered and recorded by the likes of Bobby Darin, The Carpenters, Rod Stewart, Cher, Johnny Cash, and dozens of others. “Reason To Believe,” in particular, became extremely popular and made the Top 40 more than once. McQuarrie’s description of Hardin’s musical career is a standout and a rockin’ good read.

Author McQuarrie knows what she’s talking about here. Aside from significant research and an eye and ear for detail, she was music critic for the Vancouver Sun and The Province newspapers for six years. She’s been writing about music for much longer, and although she is now part of the Faculty of Business at the University of the Fraser Valley, her musical interests haven’t waned. We should be thankful for that. It’s to the reader’s benefit that she has, in her own words, “…a mind full of useless musical trivia.” After reading this book, I would take issue with the word “useless.” 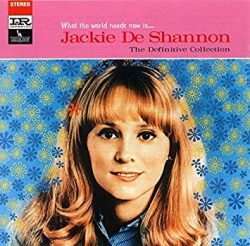 The songs and artists she includes in this collection are certainly favourites of hers, and it’s clear that her musical tastes are eclectic, to say the least.

The first instalment is about the rise of Jackie DeShannon. We know her as the songwriter behind such hits as “Put A Little Love In Your Heart,” “When You Walk In The Room,” and even the song that made Kim Carnes famous in the early eighties, “Bette Davis Eyes.” But did you know that on the strength of her singing and songwriting The Beatles chose her as an opening act for their first North American tour in 1964? (She celebrated her 23rd birthday on stage at Vancouver’s Empire Stadium). 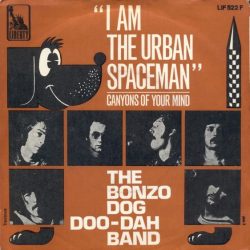 Later, we are introduced — many of us for the first time — to a British band called The Bonzo Dog Doo-Dah Band. Their live performances are described thus: “… horror masks, weird instruments, explosions, and a life-size rag doll named Alma.” While the “Bonzos” were very well received on the club circuit and through multiple appearances on a children’s TV show in England, their popularity decidedly did not translate to hit records. However, their one major release, “I’m The Urban Spaceman,” was the exception and ended up spending 14 weeks on the U.K. charts, most of that time in the Top Ten. 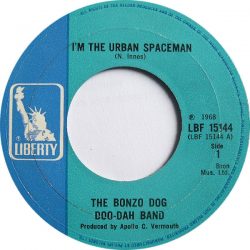 McQuarrie relates this fascinating tidbit about the song. When the band went into the studio to record “Spaceman,” the day would be a memorable one. During a break in the session, the producer of the song sat down and played what was likely the first ‘performance’ of “Hey Jude.” The producer was one Apollo C. Vermouth, better known as Paul McCartney. According to Paul, The Beatles had always been fans of the Bonzos, and he eagerly agreed to produce the record for them. Once word got out that McCartney was involved, the song became so popular that the single was selling more than 15,000 copies per day.

A handful of years later one of the Bonzos, Neil Innes, hooked up with Eric Idle of Monty Python and supplied music to many of the Python’s TV shows, records, and films. Neil and Eric eventually collaborated on a hilarious television rock ’n roll satire of The Beatles entitled, “The Rutles: All You Need Is Cash.”

Chapters on Stevie Wonder, Rod Stewart, The Bee Gees, Donovan, The Beach Boys, Long John Baldry, and many more are provided by McQuarrie. But along with the popular songwriters and bands we are also introduced to esoteric recording artists like the Bonzos, and a band called “Hotlegs.” Who…? By the end of the six-page chapter on this group and their music I realized I’d been reading about the birth of one of the seminal “artistic” rock ’n roll bands of the 1970s, and one of my personal favourites: 10cc. How did I not know this? All the stories detailed in this book contain surprises. Each story could easily be the pitch for a documentary.

Many of the songs here reached into Canada. In the early 1970s, the Government of Canada instigated Canadian Content regulations for cultural industries. Radio stations would, henceforth, have to adhere to CanCon rules that required a certain percentage of radio play to be Canadian. McQuarrie uses multi-award-winning musician and songwriter Michel Pagliaro as an entry point to help explain the Canadian music scene — English and French — during this period. By detailing Pag’s ascent into rock royalty, McQuarrie attempts to decipher the issues that affected both musicians and radio Program Directors that CanCon presented. A difficult task, but she mostly succeeds.

You don’t need to like these twenty-one songs, and you don’t even need to know who the bands are; the stories themselves are worth the price of admission. You can find articles and non-fiction books that treat their musical subject matter with reverence, sometimes bordering on sycophantic hero-worship. This is not that book. McQuarrie’s writing is eloquent, to the point, and pulls no punches. If she likes something, she says so. If she doesn’t, she says so in no uncertain terms. No pussyfooting here. Even her publisher suggests the book contains “…the occasional dose of snark.” I can tell you, it’s a refreshing style.

Parsing the DNA of sixties and seventies popular music has become a bit of a cottage industry in the last few years, primarily through websites and podcasts. Radio, too, is prone to looking back into the “stacks of wax,” with Santa Monica superstation KCRW’s “Lost Notes” being one of the best examples. Is this just nostalgia? I think it’s more than that.

The 1960s gave an entire generation its own music — rock ’n roll as a genre, a cultural phenomenon, and ultimately an art form, came of age. In the 1970s it matured. Old, white, male politicians and lawmakers who, with few exceptions, adhered to old school ways and means, and perpetuated post-war ideals and policies for a new war, were put on notice. Of course, we were disaffected. But the voting age was lowered in 1970 from 21 to 18 in Canada, and ultimately, the bar was raised. The youth that asked for change, then pursued and protested it, and then demanded it, got it. And the music wasn’t in the background — it was the soundtrack.

If I have any quibble with Song Book it’s that it’s too short! I’m hoping there’s a second volume lurking on McQuarrie’s computer hard drive somewhere. Reading this book was not only enlightening, it was also fun.

It’s been said that writing about music is like dancing about architecture. If so, I’ll leave the final comments to “dancer” Fiona McQuarrie. In her introduction to this book, she says: “The best songs, or our favourite songs, are like sparkling jewels — from different angles or in different settings, they shine in different ways, but each of them fuses sounds and words into something else entirely distinctive and wonderful.” The same could be said of her book.

Randolph Eustace-Walden is an author and television producer. He has had a diverse media-based career that includes publishing, television, film, radio, and theatre. He is the author of Aloha Wanderwell: The Border-Smashing, Record-Setting Life of the World’s Youngest Explorer (Fredericton: Goose Lane Editions, 2016) — reviewed here in the Ormsby Review — and producer of the award-winning television documentary series on the history of Canadian rock ‘n roll, Shakin All Over! (CBC, DVD). He has been nominated for two Emmy Awards, and is also the recipient of numerous other awards and nominations. Randy is currently writing the first in a three-book contemporary spy fiction series. He resides in Vancouver with his MacBook Pro and a portable 1957 Smith-Corona Silent-Super (with red and black ink ribbon), just in case.