#606 Whatever gets you through

Whatever Gets You Through: Twelve Survivors on Life after Sexual Assault
by Stacey May Fowles and Jen Sookfong Lee (editors), with a foreword by Jessica Valenti 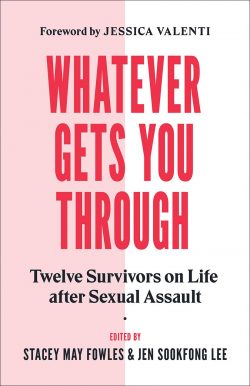 This book will piss you off. Who wants to be the perfect — or worse, the imperfect — victim? Who wants their loved one to be a victim? Further, who wants to be known for surviving sexual assault? It isn’t exactly a glorious claim to fame. This book makes you want to mentally bury the people who hurt you in a red anthill and never look back.

The stories paint a vivid, sometimes stomach-churning, picture of the torment that follows survivors of sexual assault. Whatever Gets You Through will draw those who have similar stories and provide a sense of inclusion. It may help some to realize that they are not alone in their battle. Those in relationships with survivors may gain an understanding of the daily internal and external struggles endured by the abused. As real and painful as a heart attack, many are never able to put their story of sexual assault into words.

As a survivor of abuse, I felt anxious when I opened the book. I was fearful that I would relive my experiences once again in full dying colour. I was met, however, with words that rang with such raw emotion (rage) and honest clarity that I felt an immediate common bond and a jigsaw-like jagged connection with the twelve survivors. There was no condescension or degradation knitted into their words, thoughts, and feelings. Only bare text woven on the tapestry of tragedy; sincere, straightforward threads of how they died and then survived the most savage and ruthless invasions of personal space I know.

When I first picked up the book and flipped through the pages I got angry, and then defensive. “I am not these women!” I thought. I fought with my thoughts.

In my mind: I was not broken. I was fine. My demon was denial and it had me. As I read the stories, page by page, I felt as though I had been repeatedly kicked and punched in the stomach. The first story left me angry, wondering why there were so many similarities between this “broken survivor” and myself. I almost threw the book in the trash.

The stories that followed that first account only reinforced one piercing, undeniable truth. Our thoughts are eerily synchronous. Why, in the presence of angry men, did I continue to sway to my demon’s music and to dance a dance I/we had never wanted to dance (ever)? I am these women. I am broken. But I am also like them in another way: I survived. My mind, like theirs, betrays me more than I would like to admit. I made it but so did they.

From the perspective of violated and discarded women, the effects of rape frequently manifest as physical symptoms of pain and fatigue, within, on, and throughout our minds and bodies. The minds and bodies of abused women have been screaming the same message across millennia. With that burning realization came the disgusting pungent stench of violation, all over again. Whenever I heard the atonal demonic music of my abusers, my mind would shut off and I would dance. Though my body ached and my feet bled I was pre-set to dance. Freud would term this defence mechanism societal sublimation. Then, just as I was about to sublimate things under the proverbial “I am a good survivor” rug (as per usual), I saw the bigger picture and thought perhaps I should direct the anger outward. “Fuck this.” These perverted men from my past are not holding onto MY BODY or MY MIND for one more year, one more week, one more day, one more HOUR. I will not let the demons win. I will get up. I will live again.

You’ve gone out too far from shore in your boat. Rape is the storm that hits, sudden and inescapable. God is the lighthouse. This book can be one map to help get to shore. They can violate your body, but they can’t touch your soul. Joy always prevails. May I suggest two other books that should be read in conjunction with this nasty piece of pithy narrative? The first is Battlefield of the Mind: Winning the Battle in your Mind, by Joyce Meyer (Warner Books, 2002), and Bounce Back Creating Resilience from Adversity, by Reva Nelson (Words.Worth, 1997). At first blush both opposing camps may be horrified by the stark contrast; however, having lived through the personal hell of abuse I feel that both sides have something to bring to the table.

Kimberly Webster (review author) is a 4th year student at Thompson Rivers University with a major in psychology and a minor in English. She worked previously as a tertiary acute psychiatric care worker. She is a mother of four with a man-child. She is passionate about God, guns, good mental health, and photography. She has run her own photography business since 2008. She loves singing and music although she can’t sing in front of anyone to save her life. She is a survivor of sexual assault, substance abuse, and teenage pregnancy 😉 She still battles on. Christopher Montoya (co-author) received his doctorate in brain-based psychology at the University of Calgary in 1988. As a Natural Science and Engineering Research Council of Canada (NSERC) Postdoctoral Research Fellow he had the privilege to lecture at the University of Cambridge at the Downing College Department of Experimental Psychology research facility from 1988 to 1990 in the area of brain-based motivation. Dr. Montoya is a past stem cell researcher, inventor, and published author. Chris has been employed at Thompson Rivers University for over 28 years and holds the rank of Tenured Senior Lecturer.