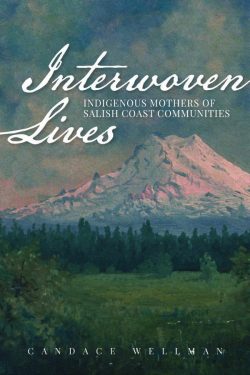 Researching settlement history can take you in many directions, some more challenging than others. While helping people with their family histories at the Washington State Archives in Bellingham, Washington, volunteer research assistant Candace Wellman became aware of the importance of “ordinary” native women in local nineteenth century history. In the early days of Whatcom County, intermarriage with Euro-American residents represented “80 to 90 percent of the couples.” Using a multitude of resources, Wellman set out to make Indigenous women’s contributions to settlement in the American Pacific Northwest more widely known and not just “ordinary.”

This book is the second of two histories about cross-cultural marriages that Wellman has thoroughly researched and presented. In the first book, Peace Weavers: Uniting the Salish Coast Through Cross-Cultural Marriages (WSU Press, 2017), she wrote about the legacies of four Puget Sound women. She fashioned Interwoven Lives in the same manner, examining the history of four Indigenous women living on the lowlands around Bellingham Bay and Ferndale.

The broad Fraser River lowlands stretching south across the US-Canadian border facilitated intermarriage among Lummi, Sto:lo, and, farther up the river, the Nlaka’pamux First Nations. There was easy communication with relatives living on the river near the Hudson’s Bay Company’s (HBC) forts Langley, Hope, and Yale. During the Fraser River gold rush of 1858, Sumas Prairie provided access for thousands of miners and adventurers arriving by ship at Puget Sound and Bellingham Bay, or hurrying north from California.

Information about Indigenous women’s lives in the late 1800s is difficult to acquire but this challenge did not defeat Wellman. Her masterful genealogies for Jenny, Defender of the People; Elizabeth, Daughter of the Moon; Mary, From the Rapids; and Mrs. Pickett, The Commander’s Wife, set the women in time and place. There is much to discover about cross cultural marriages and how husbands and wives coped during an unsettled period not only in Washington Territory, but also in British Columbia.

The first chapter draws us in by examining the life of Jenny Wynn, born to the daughter of Songhees leader Chee-ah-thluch, known as “King Freezy,” who lived near Fort Victoria on Vancouver Island. Jenny grew up in a longhouse on the lower Nooksack River, treasuring a rescue story that featured her Songhees mother. When raiders from northern Vancouver Island kidnapped women and children from her father’s reef net site, Jenny’s mother, who held considerable status, was sent to negotiate a ransom. She succeeded with the help of her Songhees relatives.

In chapter three we learn that Mary Kowpelst’s grandfather Pa’lek had guided Simon Fraser through the Fraser Canyon rapids in 1808. Her family lived at Spuzzum and her father was related to Nlaka’pamux Chief David Spintlum (Sexpinlhemx) at Lytton, who was held in high regard. Mary survived not only the influx of gold miners in 1858 but a tragic canoe accident in the Fraser River which claimed all of her family. Solomon Allen, a gold miner from southern Illinois, came to her rescue and she eventually married him. Several decades later their sons pioneered in Alaska.

Although focusing on women, Wellmen deftly incorporates the history of the Indigenous and European men who eventually settled in Whatcom County. For example, she examines the efforts made by Henry Roeder to establish a lumber mill in 1852 on Bellingham Bay that led to the birth of the Bellingham settlement. When the Cariboo gold rush began in 1860, he drove cattle across Sumas Prairie and over the HBC brigade trail through the Fraser Canyon. Cattle driving probably paid off better than gold mining but it was hard work. Roeder built a stopping house at trail’s end, 500 miles from home, calling it Beaver Pass House. He hired a caretaker when he returned to his family for the winter.

In the absence of working husbands, large networks of Indigenous female relatives helped one another during illness, childbirth, and caring for orphaned children and the aged. They also supported one another when Reservations were threatened by land-hungry settlers, who did not respect boundaries, and when schools were needed for their children.

I looked forward to reading this book because my Sto:lo great great grandmother, Mary Mussell, and her Yorkshire-born husband William Collinson settled at Sumas Prairie in the 1860s, where a cattle trail cut across one corner of their preemption. I gained a much greater understanding of their life and times and I can recommend Interwoven Lives: Indigenous Mothers of Salish Coast Communities to British Columbia historians and everyone fortunate enough to live in the Pacific Northwest.