#596 Escape from the fish farm

Jim Christy: A Vagabond Life
by Ian Cutler, with a foreword by Luis E. Navia 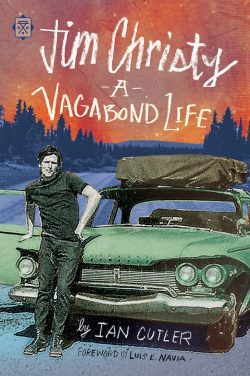 Literary biography is a problematic genre. Ostensibly, its purpose is to illuminate the author’s work, but writing about an author inevitably means competing with a substantial body of work the writer has already published that makes him or her “bio-worthy.” When the subject is Jim Christy, that’s like betting your bus fare home from the pony track on the long-shot in the ninth race.

Christy is a wild Steelhead in a Canadian literary seascape choked with schools of writers spawned in university creative writing departments operating like fish farms. As a poet, he’s better than most who claim the title. A typical Christy short story from Junkman & Other Stories (Ekstasis, 1998), opens with a guy walking into a bar, flicking a switchblade, and stabbing it into his left forearm — a wooden prosthesis. His trilogy of Eugene Castle novels, set in Vancouver during the Dirty Thirties, Shanghai Alley, Princess and Gore, Terminal Avenue (Ekstasis Editons), are a noir tour-de-force that demonstrate his mastery, both in style and plot mechanics, of what has become a classic modern genre. His 2005 novel, The Redemption of Anna Dupree (Ekstasis), showed he could apply these skills to a timely tale of an aged lifelong female rebel who rages “against the dying of the light” even when confined to the coddled, chemically-sedated environment of a senior’s care home. Poetry and fiction are mostly busy-work, jabs and hooks that make your head ring; Christy’s kiss-the-canvas punch is a style of personal journalism that blends eclectic scholarship with authentic witness testimony. For half a century, his byline has graced most periodicals worth the name in this country.

In 1983 Doubleday published The Price of Power, Christy’s relatively conventional biography of unconventional, obscure, time-and-motion “efficiency expert” Charles Bedaux, one of the first of the breed of apolitical amoral technocrats who now run the world. After the defeat of France in 1940, Bedaux worked for the collaborationist Vichy regime to improve French industrial production to the ultimate benefit of Nazi Germany, but was shocked to be treated as a war criminal. Christy’s biography is a revealing portrait of one of the shadowy “hollow men” who defined the 20th Century decades before Cold Warriors like former corporate executive, later US Defence Secretary Robert McNamara tried to conduct global policy and localized wars using similar pseudo-scientific criteria.

Christy’s choice of Bedaux as a subject signalled his lifelong fascination with the oddballs and outlaws whose influence on European and North American culture has been much greater and more lasting than their fame at the time or current reputation would suggest. As a critic, he has ceaselessly promoted the work of seminal Swiss-French author Blaise Cendrars. Reading Cendrars now makes Fitzgerald and Hemingway look like the middlebrow magazine hacks they actually were while they posed as Great American Writers.

Christy’s interests have always extended far beyond the merely literary. Vancouver’s Anvil Press has published two volumes of his Scalawags articles, originally written as columns for Nuvo magazine, mini-biographies of wild men and women who led incredible, often marginal lives, yet shaped the cultural history of the wealthiest and most influential part of the world. Christy’s Flesh and Blood (Douglas & McIntyre, 1990) is possibly the best book ever written about boxing, a relic of the ancient gymnasium that fascinates our culture to this day. Penned by a guy who punched in the Police Athletic league in South Philly and knows the taste of blood and canvas, compared to it, Morley Callaghan’s famous memoir of sparring with Hemingway is a lame comedy skit.

Ever seeking his own eccentric kind, Christy’s fascination with landscape and architecture led him to discover people who built their peculiar “dream homes” in trees or underground, out of discarded bottles or old tires, long before alternative architecture became trendy. The result was Strange Sites (Harbour Publishing, 1996), which fathered a Knowledge Network TV series, Weird Homes, for which Christy acted as location manager, and which grandfathered extreme home spin-offs that continue to be produced by staid media like the BBC to this day.

Disparaging travel writing of the “where to get a good cheeseburger in Grombalia” school, Christy stands with Bruce Chatwin and Paul Theroux as one of the godfathers of alternative travel writing modeled on Jack Kerouac’s On the Road, a book he credits with making him abandon his journeyman career as a gangster and light out for Canada. A serial runaway since the age of twelve, the road held few terrors for him. When his family moved from the colourful violent South Philadelphia neighbourhood of his childhood to the sterile suburbs of late 1950s Middle America, he hit the road for good. In Canada, he kept rambling, exploring, getting to know its people from south to north, as well as the usual east to west, chronicling his restlessness in Rough Road to the North (Doubleday 1980), Travelin’ Light (Simon & Pierre 1982), and his finest collection of globe-roaming tales, Between the Meridians (Ekstasis, 1999), which cemented his rep as “a hip Indiana Jones.”

How do you write a biography of an author with a CV like that?

Sensibly, Ian Cutler chose not to write a critical biography. It would take years of research to track the reading lists of a guy who has been known to reference Restif de la Bretonne, Knut Hamsun, and Raymond Chandler in the same sentence and the book would be four times as long. Instead Cutler focuses on establishing a basic chronology for the life of a chronic vagabond who has explored the margins and shadows where things happen that make it unhealthy to pause to note the date and time in your journal. Like the feral alter-ego he adopts in one of his best poems, “Palatine Cat,” Christy has used up most of his nine lives, collecting for loan sharks in South Philly, dodging poisonous snakes and murderous guides in Central American jungles while seeking lost ancient cities, rotting in a rat-infested Colombian prison, and hanging out with the kind of people who pass you a pistol when there’s an unexpected knock on door.

A philosopher with a special interest in the writing of tramps and vagabonds, many of them dropouts from the depressions that have plagued capitalist economies since the late nineteenth century, Cutler extends his interest to the Beats, who opted out of the North American postwar prosperity boom on ethical and aesthetic grounds. He argues that Christy is part of a tradition of vagabond writers and philosophers that descends from the ancient Greek philosopher, Diogenes the Cynic, who rejected materialism, lived in an earthenware tub in Athens, sniped at Plato for misrepresenting Socrates, and snubbed the victorious young Alexander the Great, who asked if he could do him any favour, by saying, “Yes, stand out of my sunlight.” That sounds enough like Christy at a sidewalk table blowing off some loudmouth weekend hipster breathing too close to his beer, but he’d be more likely to reference guys with road monikers like Frisco Jack and A-Number-One, Texas Guinan or Arthur Cravan, as role models.

Despite risking a chronological approach that invites dullness, (the deadly And then –… narrative style), Cutler lets himself be lured off the main road into tantalizing detours presented by an unorthodox life so often that he frequently has to resort to the To get back to the story gambit. In some biographers, this might be accounted a failure to establish order on the material, but to give a genuine account of the life of a multifarious, peripatetic artist like Christy, going with the flow is an essential skill. Cutler’s numerous narrative reboots testify to his determination to stay on task despite temptations to wander as freely as his subject.

Pressured to produce sensational bestsellers, most literary biographers have a choice: gild the legend created by the author’s work or take a hammer to it. That’s an even-money bet, lousier odds than Russian Roulette, which explains the reluctance of author and their friends or heirs to co-operate with biographers unless they sign ironclad “friendly” waivers up front. Christy, whose gypsy life has made him slow to trust for solid reasons, trusted Cutler enough to co-operate and give the high-sign to close friends like Vancouver author Joe Ferrone to do likewise. Despite his obvious desire to include Christy in his larger philosophical thesis about vagabond/tramp writers, Cutler has done a creditable job of establishing a baseline for the life of a uniquely important writer no would-be biographer could discover by looking at records of major Arts Grants or cushy Writer-in-Residence gigs. The irony of literary biography is that, as mortal beings, writers are as flawed and ephemeral as anyone — but the author’s work survives and speaks to the future, to readers and rebels of generations to come.

John Moore of Squamish wrote features and book reviews for The Vancouver Sun for 15 years — on everything from Prozac to old sports cars — and also wrote general interest features, mostly guy fashion, wine advice, book reviews, and outdoors stories for the North Shore News. At other times he worked as a bartender, bar manager, deckhand, taxi driver, and truck driver. He is known for his trilogy of West Coast novels: The Blue Parrot, Three of a Kind, and The Flea Market, all published by Ekstasis Editions between 1999 and 2003. His latest book, Raincity: Vancouver Essays, will be published in 2020 by Anvil Press. Editor’s note: John Moore’s Raincity has now been reviewed here by Grahame Ware.