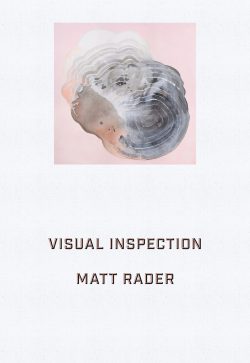 I don’t live with an autoimmune disease and probably – hopefully — neither do you. I haven’t had to scramble from doctor to doctor for answers or decode what is different about my body, what is or isn’t working. I have not lived through enough physical pain (for example, receiving 600 injections over the course of three years) and suffering to need to philosophize on the difference between the two. And neither, I hope, have you.

Matt Rader has experienced all of this, from not breathing properly from birth and seemingly unravelling from there. But Visual Inspection is not really about autoimmune disease. Rader and his two collaborators — poet Jordan Scott, a significant stutterer, and artist Carmen Papalia, who is legally blind — set before the reader an exploration of the way we create and read art.

They ask what roles our body, mind, and communities play in the process, and how all of these may be affected when a person is differently-abled.

The key to Visual Inspection is that we perceive the world through our bodies. Our senses give us the raw information that our mind processes into images, sensations, and experiences. One need not look too far for the roots of this idea, to the work of artists and thinkers from Immanuel Kant to Percy Bysshe Shelley, who likened the poet to an Aeolian Harp, an instrument played by the wind. Rader wears his influences on his sleeve in explaining this concept:

Robert Pinsky writes, in The Sound of Poetry, that the instrument of the poet is the breath of the reader. And if the poet is the first reader, as Paul Muldoon asserts in The End of the Poem, the poet’s breath is the instrument of composition. If you listen, you can hear Charles Olson in the hazy Blue Ridge Mountains sighing wearily, I told you so.

Olson’s “Open Field Composition” must not have been far from Rader’s mind during the three years it took him to complete Visual Inspection, and he and his team focus on the body of the poet. In the long line of writing on the subject, few have asked specifically what happens to the process when the poet has certain restrictions or modifications on their body. “What’s curious about bodies that work differently from our own is how they offer an opportunity to experience the world anew, how they can transform time and space when we are in relationship with them.” And Rader continues:

A page of poetry is a visual field. It contains visual information such as the number of lines and the amount and location of white-space that informs our expectation and experience of the poem before we read any words. People who cannot see obviously experience this field in a different way than those can, not to mention how they experience “reading” as such.

To give an example of how this works is a bit tricky in a limited space. Visual Inspection is hard to paraphrase. Individual poems lack the gravitas of the whole and sometimes require the reader to flip to the extensive endnotes section at the back of the book, where Rader stores explanations, extended thoughts, anecdotes, and other supplementary material to enhance the primary writing.

Some of Rader’s poems are entirely blacked out and redacted. The narrative becomes lost, the writing becomes claustrophobic, the reader begins to feel stuck in the words. But this is not due to ineptitude in Rader’s writing: it is a carefully chosen reflection of the body through which he experiences the world. The writing reflects the instrument of composition, and if we find that jarring, it is from our own lack of clarity. “Sometimes searching for something guarantees you’ll never find it,” Radar writes. “Sometimes what you are looking for obscures what it is you find in your search; you have to see not what you’re looking for but what is there.”

Clarity is a big part of this work. Rader suggests that “to suffer is to insist that things be different.” On the other hand, pain can be healed or it can’t. Pain brings clarity. This may sound like something of a bleak, sadomasochistic mantra, but there is no flaying involved. It’s hard to quote from the book because it should be read as a whole, in one sitting if possible. The poems change as the entire picture becomes clear. This is not a story of one man’s illness, or even of living with a disability. Rader is interested in the community of which illness is part.

Like so much great literature, it is a story of the world, starting with Rader’s home in Kelowna, which is at the forefront of the tapestry that begins to unveil itself. Turkey Vultures glide in the distance, and “on the nearby hills, the semi-arid shrub-steppe carries on its gathering of sagebrush and grasses.” It literally goes deeper too, Rader reminds us. “This table is not solid … it is made of subatomic particles that are themselves mostly empty space. That space is redacted by our mass in relationship to the mass of the table.”

Rader describes an experiment in which a group of people take a walking tour of downtown Kelowna with their eyes closed, led by Carman Papalia. In a human chain, each person has one hand on the shoulder of the person in front. Communications are passed back down the line like a nerve. The segments of the book that deal with this experiment in experiencing the world as a blind person might are the loving anchor of the book. The chain of people walking sightlessly through the city are experiencing things as someone with a different body might, and as a community they adapt and interact with their surroundings. It is the relationships that matter more the individual body. Together the story starts to coalesce. The nothingness between the particles is redacted. The ability or differences of certain bodies start to matter less.

While Rader has created a challenging work that a casual reader may baulk at, hidden beneath its sometimes gnarly surface are rewards, too, as he explains. “Like literature,” he suggests, “the challenges of my personal embodiment are less visible; they have to do with largely internal processes. Literature exists from the beginning in an encoded, symbolic realm, but it is created by people who do not.”

Ultimately, Visual Inspection is about love. Within its pages are poems and prose written through a body that is not like ours. Here are visions we have not experienced, hopes we have not held, pain we have not felt. Yet any body in literature could be spoken of in the same way. Every time we experience literature we live through other eyes and so form connections with which to build a larger, loving, understanding community. In Visual Inspection, that community grows a little larger.

Paul Falardeau is a poet, essayist, brewer and most recently, an English teacher, living in Vancouver, a city on the unceded lands of the Musqueam, Squamish and Tsleil-Waututh First Nations, whom he offers respect and gratitude. He is a graduate of University of the Fraser Valley and Simon Fraser University. He has published in Pacific Rim Review of Books, subTerrain, and Cascadia Review, and he contributed an essay to Making Waves: Reading B.C. and Pacific Northwest Literature (Anvil Press, 2010).