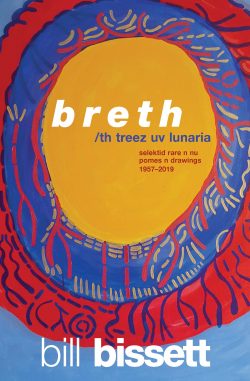 Looking at my shelves of poetry, I see that bissett books occupy the breadth of an outstretched hand, yet these don’t constitute even half of this prolific poet’s output. The fact that these books extend along the shelf from Birney to Blake also seems right — both of those men being dreamers whose poems are so distinctively individual, each in his own way ahead of his time in form as well as subject. Blake’s visionary works of angels and other worlds, Birney’s still-contemporary-seeming songs of green and his “shape” poems.

For those not so fortunate as to have such an extensive collection, this newest bissett book, breth/th treez uv lunaria could fill quite a bit of that gap, as it sits at over 500 pages.

Poet Tim Atkins has written a useful foreword to the collection, “bill bissett: sum ideas uv evreething.” It supplies all that any reader might need to know to be brought up to speed on who bissett is and how he got to be one of the country’s most well-known and respected troubadours. He too alludes to “The decades-old cliché that bissett is a modern day William Blake” calling it one that “remains a reasonable claim.” Of course, he goes on with an exhaustive list of the many other facets of bissett and his work.

Bookending the collection is a set of “notes” from bissett himself in which he offers a rationale for the unconventional way he chose to arrange the work — not in the order in which they’d been written or published, as is generally the case with a selected, but “organiklee.” He explains this decision by mentioning time itself: “…time i wanted 2 b continuing back n 4th not chronological 4 me ths way creates a mor fluid flow uv th pomes n lets th pomes speek 4 them selvs.” And speak for themselves, they do.

When you see him perform, it’s hard to grasp that he’ll be turning 80 in November (along with Margaret Atwood, his “astral twin”), as his readings are much more than simple “readings” — he chants, he dances, he may even seem to howl at the moon — he makes the words come alive so you’ll never look at one of his poems in the same way again.

But looking at the poems — and falling into them — is exactly what this book offers. Even the oversize font (I can only guess, but many of the poems could well be set in 32-point, bold), impossible to ignore, serves as an invitation that’s hard to say no to.

And in amongst the poems are many examples of bissett’s distinctive artwork, both his drawings as well as his “typewriter” art. While some may choose to call these latter “concrete poems,” they often go beyond the usual examples of that particular form in that words are not only incorporated, but are often obliterated by lines of type, gone over so many times that they become dark as if they’d been redacted.

Like Birney, surely one of our earliest eco-poets, bissett worries for the planet, especially for the whales and salmon — and of course, the “treez.” Consider this excerpt from “sum ideas uv evreething,” the title Atkins borrowed for his introductory notes:

Go ahead. Read it out loud. Tell your mouth to make all the sounds, just as he suggests in the following:

bissett’s spelling stands as a weak excuse for those who choose not to read him. All it takes is the willingness to give his work the due any poem deserves — that of honouring its past as an oral tradition.

And once you decide to immerse yourself in his work, you’ll discover the breadth of worlds — from bombs dropping in wars to the terrible island of plastic that whirls in the Pacific. With references to everyone from Shakespeare and Stein to Gorbachev and Reagan and our friends who’ve gone to spirit, bissett is philosopher, comedian, Canary in the coalmine. His is a voice that is important, as urgent as sustaining breth.

One of Heidi Greco’s happiest accomplishments is having one of her poems included in the tribute anthology, radiant danse uv being: a poetic portrait of bill bissett (blewointment books, Nightwood Editions, 2006). Her own most recent collection is Practical Anxiety, from Inanna, 2018.