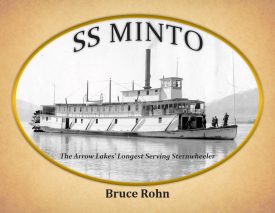 The story of a ship can also illuminate its people and its times. Minto was a lifeline in the West Kootenay region of British Columbia for two generations. The 162 ft coal-fired sternwheeler was originally designed by the Canadian Pacific Railway to operate on the Stikine and Yukon rivers. It was one of several meant to support the Klondike gold rush. Heavy steel frames and hull sides were meant to help the vessels survive operations on those great rivers.

But corporate plans changed, and the Minto’s prefabricated hull parts and steam engine were assembled by James Bulger’s shipyard in Nakusp in 1898. After a wooden deckhouse was built at the yard, she was side-launched to become a ferry on the Arrow Lakes and Columbia River. At the time, the C.P.R.’s B.C. Lakes and Rivers Service was amassing sternwheelers, freight boats, tugs, and barges as transport for new mines and settlements of the West Kootenay.

Minto‘s role in this far-flung network was to run a daily schedule, making stops and meeting trains while steaming 134 miles along the two Arrow Lakes. Minto mustered a crew of 30, and could accommodate 225 passengers and considerable freight. Top speed was 13 knots. As farmers, orchardists, loggers and sawyers began to settle in the area, stops included hamlets, work camps, and tourist resorts. Besides Minto, company sternwheelers Bonnington, Rossland, and Kootenay also worked the lakes, along with tugs Columbia and Whatshan. The tugs frequently transferred railway cars across the lake, pushing them on reinforced wooden barges.

Other C.P.R. vessels came and went on the lakes. New ones were constructed while older ones burned, sank, or were scrapped. Minto steamed on for fifty-six years. Sternwheelers may have employed 19th century technology and resembled floating apartment buildings, but they proved themselves on the Arrow Lakes. Shallow draft allowed them to navigate the sandbars at the central Narrows and in the north at Arrowhead, as well as make beach landings and back off again without damage. They were maneuverable and could push barges to transport large loads of freight, or to break ice when the lakes froze over. Their simplicity meant crews could handle routine repairs, such as damaged paddles or leaking boilers, during stops.

Bruce Rohn’s detailed history puts the Minto in its context with well-researched text and many archival photographs. There is a brief description of each lake community during the early 20th century, including Nakusp with its shipyard. Most of the narrative is chronological, and traces a gradual decline in commercial lake traffic from the peak years between 1911 and 1914. The First World War and economic slumps hit the region hard, while operation in ice wore down the fleet. As roads were pushed through the Kootenay, trucking also reduced business on the water. The Second World War brought a brief revival as poles and lumber were in great demand.

Rohn includes profiles of key captains, officers, crewmembers, hospitality staff, and shipbuilders who lived and worked on the lakes. He describes social events aboard the Minto, such as excursions, holidays, and concerts. There are reprints of contemporary newspaper articles, and excerpts from ex-crew memoirs.

The author’s interest in Minto has a personal aspect. Rohn grew up on the west shore of Lower Arrow Lake, in the small orchard community of Renata, without road or rail access. He saw the veteran sternwheeler being loaded with fruit grown by the village co-op. Rohn recalls, “Meeting the boat at the wharf was … a vital part of everyday life. Here, the community heard the local gossip, shipped and received freight, got news from the outside world, and welcomed new visitors.”

Completely overhauled in 1928 and rebuilt in 1938, the Minto and her crew coped with serious flooding in 1948, then steamed on to a 50th anniversary celebration.

In 1954, an era ended when the C.P.R. ceased its Arrow Lakes service. Tugs and smaller ferries continued to operate for other owners with a provincial government subsidy, but the sternwheelers were finished there. After a festive farewell run, Minto was sold to two Nakusp service clubs for use as a meeting hall. However, there was not enough money raised to preserve her. She was scrapped and eventually burned.

In 1968, B.C. Hydro’s new Keenleyside flood control dam, near Castlegar, raised the level of the lakes by up to 12 metres, flooding farmland and displacing 2,000 residents. Some towns were rebuilt on higher ground, but promised major highways and bridges were never constructed.

Today three provincial government car ferries cross the Arrow Lakes. As sternwheeler times on the lakes begin to pass from living memory, Rohn should be commended for reconstructing the Minto‘s story from many sources, including the Arrow Lakes Historical Society archive, his parents’ papers, and other Arrow Lakes family collections.