At the Centre of Government: The Prime Minister and the Limits of Political Power
by Ian Brodie 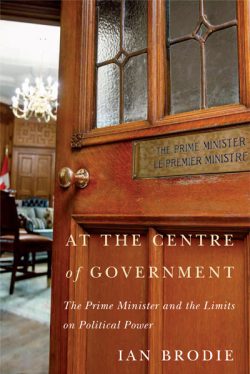 A political scientist by training, Ian Brodie served as Stephen Harper’s first chief of staff, 2006-08, and he is now a professor of political science at the University of Calgary. At the Centre of Government is part memoir and part political science study on the power of the prime minister.

In the 1970s, Canadian political scientists began to speak about the “presidentialization” of the prime minister. The argument was picked up again in the late 1990s by Donald Savoie — a professor of public administration at the University of New Brunswick (Moncton). In his book, Governing from the Centre: The Concentration of Power in Canadian Politics (1999), Savoie argued, “Canadian prime ministers, again, particularly when they have a majority government in Parliament, have in their hands all the important levers of power. Indeed, all major national public policy roads lead one way or another to their doorstep…. In short, the prime minister is head of government with limited checks on his power inside government or in Parliament.”

Savoie’s argument was popularized by former Globe and Mail columnist Jeffrey Simpson in The Friendly Dictatorship (2001). While some political scientists suggested that these accounts of prime ministerial power were exaggerated, a consensus emerged in the field that the Canadian prime minister had indeed grown more powerful. This was reinforced by the award-winning Democractizing the Constitution: Reforming Responsible Government (2011) by the late Peter Aucoin, Mark Jarvis, and Lori Turnbull.

As a political scientist, Brodie says that he accepted the consensus that the prime minister had grown overly powerful, but he started to question it after he became Harper’s chief of staff. And he sets out to refute the argument in his book. However, he concedes that the prime minister is “inherently powerful.” He argues that there are four broad policy areas “where a prime minister can never fully delegate responsibility to others…. These are decisions about fiscal policy, Canada’s foreign relations, the federal government’s relations with the provinces, and the management of the government’s business before Parliament.”

More broadly, Brodie writes, “I see the prime minister as the only one who can truly craft an agenda for the government as a whole. In crafting and then implementing the political dimension of that agenda, the prime minister is supported by his political staff in the PMO [Prime Minister’s Office]. When the nonpartisan public service support is appropriate, the prime minister is supported by the officials in the PCO [Privy Council Office]” Ministers, he suggests, “have little time or inclination to think about the broader government agenda or even the country that lies beyond their portfolio.”

The prime minister not only sets the agenda, he oversees the communication of it, and Brodie says Harper was “adamant” that government communications be crafted with as much consideration as the substance of the policy. This takes us into the realm of political marketing and branding, which was elevated to a new level by the Harper government (see Susan Delacourt, Shopping for Votes: How Politicians Choose us and We Choose Them, 2013, and Alex Marland, Brand Command: Canadian Politics and Democracy in the Age of Message Control, 2016).

Political marketing and branding goes beyond campaigns. In Brand Command, Marland argues that under the Conservatives branding began to penetrate the public service. Brodie suggests that many public servants actually welcomed this development: “They understood that basic professionalism in communications is a fundamental expectation in any large organization, and officials who complained about the discipline and professionalism we expected had trouble explaining why it was better for them to go public and ‘wing it.’”

So far, Brodie has confirmed Savoie’s thesis that the prime minister gets to set and control the direction of his government with the support of the staff in his office and the senior echelons of the public service. So, what are the limits on prime ministerial power?

First, Brodie argues that the prime minister does not have a completely free hand in selecting his cabinet, notwithstanding his broad constitutional authority in this respect. For the most part, he has to work with the members of his party elected to the House of Commons and the cabinet has to have some regional balance, along with other considerations such as language, gender, and ethnicity. He also claims that it is difficult to fire a minister, presumably because it upsets the aforementioned balance in the cabinet and perhaps because it might be an acknowledgement of weakness.

And ministers do important work, at least within the framework set by the prime minister, as Brodie notes:

Most decisions of the Government of Canada are made well below the level of prime minister. The weekly catalogue of formal decisions of the Government of Canada, the Canada Gazette, reports on thousands of decrees, orders, proclamations, and other instruments of decisions each year. The prime minister is not aware of most of them…. Ministers, in almost all cases, have wide discretion to use their ministerial powers as they see fit without checking with the prime minister, PCO, or PMO.

In the strongest part of the book, Brodie makes the case that parliament is not dead. Much of the government agenda has to be put into legislation and, most importantly, Brodie writes, “Parliament holds the power of the purse. The executive branch cannot raise taxes or spend public money without Parliament’s approval.” And there were no assurances that Parliament would approve the money requests of the minority government Brodie worked for. One assumes that the passage of legislation and money bills are easier with a majority government.

Ian Brodie gives us a fascinating look inside the first two years of Stephen Harper’s government. In my reading, Brodie does more to confirm than refute the consensus that the prime minister of Canada is extraordinarily powerful.

However, he does remind us that the prime minister operates in a political system with a constitution, conventions, laws, and rules that have to be followed. He is not a dictator who can fulfil his every whim with the snap of his fingers.

Hamish Telford is an associate professor of political science at the University of the Fraser Valley in Abbotsford. He is the author of Rules of the Game: An Introduction to Canadian Politics (Pearson Canada, 2014) and Talking Past Each Other: Quebec and the Federal Dialogue in Canada, 1867-2017 (Peter Lang, 2018). He is a frequent commentator on B.C. and Canadian politics in the national and international media.