Trauma Head, by Vancouver poet Elee Kraljii Gardiner, was long-listed for the Raymond Souster Award and shortlisted for Robert Kroetsch Award for Innovative Poetry, both for books published in 2018 – Ed. 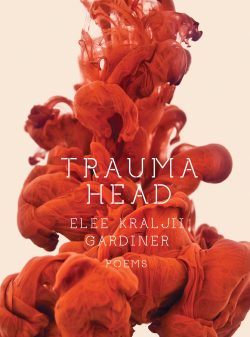 Try to hold mist, dusk-coloured, in your palms and between your fingers while also witnessing it rise on breeze and trickle like oil. This is the experience of reading Trauma Head, a created experience that reads as purposeful, the author’s mind re-imagining what it has experienced so that the reader may too. Or, perhaps, these poems, captured by Elee Kraljii Gardiner, happen in the moment of the experience, the moment a mini stroke seized her and passed, leaving a sign of something larger, something infinitely real and potent to the imagination.

Trauma Head does not start with a clear straight poetic line. Rather it begins with sound and image, the body in its physical state: “voices flashlight” and moves to the physical: “unbreakfasted, we are/ here to work out.” Normal, average, everyday exercise class, “we runners scissor-/ cut swathes/ through this milk.” Here, as we see the legs running, we are also introduced to the recurring concept of scissors, linked to the Greek fate, Atropos, who “determines a person’s death by cutting the thread with her scissors,” as Gardiner explains in her notes in the book.

I confess, I have begun this review at the very beginning of the book, the first line of the first long poem. How better to draw you in than with a sampling of the trauma Gardiner lived through? Trauma Head is a book of three long poems: “Tunica Intima,” “Trauma Head File,” and “Prognosis.” “Tunica Intima,” which encompasses most of the book, means “the innermost tunica or layer of an artery or vein” (Wikipedia). It is the part of Gardiner’s vertebral artery that tore away the moment she had a stroke.

So from exercise class, in the opening lines, Gardiner moves us from the thrill and rush of exercise:

do not think
to brace myself
for tragedy in minuscule

butterfly effect across the network:
T minus seconds and

How to re-capture a moment of trauma and dive into the medicalization of your body, and your experiences? Gardiner does it evocatively. She pulls you in with strangeness, reversed text, her left side going numb, the ambulance coming in. Touchstones arise involving Robert, her partner, and little moments of real in the unreal or clarity in the chaos:

the scent of his neck

he scrutinizes, reconciles
she fainted

Here, and elsewhere, Gardiner uses understatement and humour to release tension: “what is your name/ /L/E,” a line that is linguistically correct and typographically playful. Her play with language and sound allows for confusion, clarity, and self-deprecation, and lets readers see themselves there, invites them to relax a little because she’s okay — and inevitably to tense a bit too because anything in our bodies, such intricate machines, could go wrong. Her children, too, are touchstones who bring her headache-inducing noise and help.

A poem/ memoir this book is called, speech text too, with sound lineated to represent the disassembly of language and understanding. How else to tell this than in poetry?

On occasion, near the middle, I wanted a shift. I wanted the language to clarify, to fall more narrative and less lyrical; because I wanted, as I read, for Gardiner to feel better and hit me with a linear line. Instead, she uses erasure to write over a small prose piece and then, a little later, gives a prose chunk that she inhabits with her own words: “Vertebral artery dissection (VAD) is one of the most common identifiable I turn to face the pillow causes of stroke in those aged 18-45…”

How to remember the body’s unique moments and hold them long enough to articulate? Stay present in this way of thinking and let yourself ride through it. Let yourself be changed by how language manifests itself on the page. This is the gift of poetry, and the gift Gardiner brings as she articulates her experience.

One of the most fascinating threads in the book sits at the bottom of the page, a changing footnote that charts her diagnosis of the poem/memoir as she writes. From page 19: “Etiology: Label all specimens with patient’s first and last names, DOB and/ or PHN & site. Body: 3 Tongue: <0 Fog: 3 Squeeze: 4 Cut: 2 Breath: 0.”

I asked Gardiner because I wanted to know more about this thread. “There is a note in the end section about etiology, which is my personal query about how much of the experience I manifested or created via my writing and thinking about it,” she replied.

One of the ways to look at the poems and run a diagnostic on them was to determine how often certain words come up. “Doing this kind of test on the memoir allowed me to evaluate it, much the way a doctor runs blood tests and assesses the patient’s status according to the numbers assigned to that sample,” says Gardiner.

In a way, she checked on the health of the poem by assessing word-use. She could enter the ways of her body through creating a test for the poem that came out of the experience. “I’m interested in the way we read documents and respond to perceived or manufactured authority,” she reveals, which in itself is interesting when faced with a medical scare. She writes:

healer digs fingers in my scalp

at the end of each stroke

she likens to black licorice laces.

as plausible as God

This checking in with the poem and assessing its health, and her play with different moments of belief or doubt, and her doing that questioning with humour (I picture her with one eyebrow arched), adds so much humanity to this collection that it instantly endeared me to it and to the experience of reading it. It allowed me to check in with the lived trauma and the life of recovery, and with Gardiner’s examined self that sometimes borders on the humorous, the self-aware, and self-pity:

because I’ve had a stroke, you know

There is so much to praise in Trauma Head; so many reasons to go back and reread. Here is a collection of poems you don’t dip in and out of, but fall fully into, read from beginning to end, go back and read again. “To use another medical metaphor,” Gardiner wrote me, “I do think of this long poem/ memoir as a needle biopsy, a narrow and deep record of what I went through that doesn’t tell the whole story of my experience but provides core indications of what my situation was.”

Each poem is a sensory record of how the body longs for sensation, while every sensation overwhelms:

I want to touch
want heavy cells
soaked with deep breath
want to warm my hand on the nape
to settle leg upon leg, slide it, slurring
want his voice moving through
my ribcage
code to heart muscle
I lean into the shoulder
siphon, change

Yvonne Blomer is the author of a travel memoir Sugar Ride: Cycling from Hanoi to Kuala Lumpur (Palimpsest, 2017), and three books of poetry, as well as an editor, teacher, and mentor in poetry and memoir. She served as the City of Victoria poet laureate from 2015-2018. In 2020 Sweet Water: Poems for the Watersheds, Caitlin Press will be launched, her second of three poetry anthologies focused on water ecology after Refugium: Poems for the Pacific (Caitlin: 2017).