Little Island Bake Shop: The Heirloom Recipes Made for Sharing
by Jana Roerick 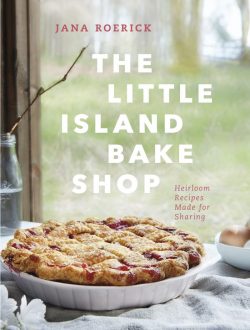 A wonderful thing about human beings is the variety of their passions. There’s a place for all interests, with hundreds of occupations out there, all filled, because someone somewhere wants to be an astronaut, an entomologist, a teacher, a carpenter, a pastry chef. Salt Spring Island is humanity in microcosm. There are people here for all sorts of reasons and with all sorts of interests and skills.

Take Jana Roerick. From the time she was a little girl delivering home baked products by bicycle cart on Toronto’s Ward Island, she knew she wanted to be a pastry chef. So she went to chef school at George Brown College, where she graduated with honours, apprenticed at various locations, including Toronto’s Senator Restaurant (famous for its comfort food), worked in a catering business in Trinidad — always learning — and ended up finally on Salt Spring Island, where she opened Jana’s Bakery, an award-winning bake shop and a blessing on the island. It is here she exercises her passion for baking and for making people happy — which is what cooking does and what she wants it to do.

Cooking, like music, is an activity of sharing; it creates community. Jana sees it this way, and so, besides a bakery for the island, she has provided the world with a cookbook of her favourite recipes and generous advice on how to prepare them. It’s a class production, from its sturdy binding to the inviting berry pie on the cover, to each page with its matte finish, soft type, beautiful muted photographs by Danielle Acken, and a design that is varied but uncluttered, favouring the text. A comfort book about comfort food, with an heirloom look, written with love.

The contents divide into eight chapters plus introductory material — Essential Equipment and Baking tips — and ends with a metric conversion chart. The preliminary chapter — Under, Over, Inside: Basic Recipes — provides the fundamentals for bakery items, from foundations to toppings to fillings, a helpful guide for the recipes to follow. She then moves on to standard categories of baking: cookies, slices and squares, muffins and loaves, pies and tarts, cakes, savouries, and preserves and pickles. I was particularly pleased to see the last two chapters, which don’t always make it into a bakery cookbook. Each recipe is headed by a personal comment, germane and personable (though I could have done with type a tad darker). You feel she is in the room with you, chatting happily about her creations, their history and her feelings about them. The volume closes with an index where items are easy to find. For example, blueberry-lemon scones are found under both “blueberry(ies)” and “scones” — a timesaving help.

So, a most inviting production. But a cookbook stands or falls on the quality of its recipes. How does Jana’s book stack up? New to Salt Spring, we were able to conduct two tests: first we obtained certain items from her shop, so we could see what hers were like, then tried them ourselves, to see how well the recipes translated to our own kitchen and skill level. It is one thing to taste a chef-produced confection, but sometimes quite another to try your own.

My usual shibboleths for a bakery are butter tarts (too dry or too runny, too many raisins), date squares (not enough filling, overpowering citrus, crumble too hard), and apple pie (apples too chewy and flavourless, not juicy enough, insufficiently spicy). I am happy to report that none of these characteristics proved true of Jana’s goods. Her butter tarts are superb, deep and rich without being overly sweet. Though she uses raisins (she belongs to that heretical sect), their presence was discreet and pleasing, perhaps even enough to convert me. It will take several dozen tarts over time to be sure.

The date squares are scrumptious, the date mixture plentiful and enriched by just a hint of citrus (one peeled orange, pureed). The oatmeal crumble benefits from a generous lashing of butter, and is just the right consistency. At last, date squares you would not be ashamed to introduce to your mother.

As for her apple pies, the word mouthwatering must have been coined especially for them. First, they are beautiful, with a serrated latticework top, washed with egg and sprinkled with sugar, the juicy apples tantalizingly brimming beneath. The most noticeable thing about them is that, unlike many commercial apple pies, they are not too sweet. Rather than being overpowered by a sugar hit, you taste apple, aromatic with cinnamon and tangy with the zest and juice of one lemon. And something richer — rum? (Optional in the recipe.) Second, the pie is full, not of juice that has escaped, but of apples baked to perfection, with the juice succulent within. They are soft but not mushy, gently yielding to the bite. The crust is a delectable complement to the filling. A major apple pie experience.

So, these desserts passed with flying colours. Designed to give results at home that match those in her bakeshop, Jana’s instructions proved clear and easy to follow (as easy as baking — a demanding art — can allow). We also secured from Jana a sampling of her quiche, spanakopita, and mango chutney, all of which were of the best quality and taste and straightforward enough to duplicate in our kitchen. An added pleasure: as you read the recipes and their commentary, it becomes clear just how much this woman loves her work and loves sharing it, as she says in her congenial introduction and acknowledgements. Altogether a delightful cookbook, one that will remain a treasured companion on our kitchen shelf.

Harvey De Roo was a professor of Old, Middle, and Early Modern English language and literature and Old Norse language and literature in the English Department at Simon Fraser University. In the eighties he was Editor of West Coast Review. Upon retirement, he taught opera history and appreciation in the SFU seniors programme at Harbour Centre. He was founding secretary of City Opera Vancouver and served on the board and Artistic Planning Committee for several years. He was the opera reviewer for Vancouver Classical Music (vanclassicalmusic.com) from 2014 to 2018 and lectures annually to the Vancouver Opera Club.