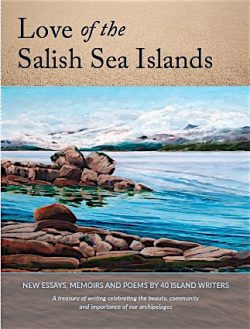 I first encountered the term “islomania” in Lawrence Durrell’s sublime Reflections on a Marine Venus, a memoir of that writer’s time on the Greek island of Rhodes. A person struck by islomania yearns for the lost Atlantis and what better place to suffer the condition than on a Greek island?

Well, how about the entire archipelago of islands in what has become known as the Salish Sea, that area of coastal waters comprising the Strait of Juan de Fuca, Puget Sound, and the Strait of Georgia? Anyone who has spent time on B.C. ferries or other craft or else flown over those waters has seen the islands strung out like seaglass, blue, aqua, bottle-green, tawny gold, some of them rough-hewn and craggy, some of them smoothed by wind and tide. As a child growing up on Vancouver Island, I camped with my family on Salt Spring, rowing to abandoned farms in my father’s little dinghy. Later in my life, I visited others in the archipelago — Gabriola, Galiano, Saturna for one of the legendary lamb feasts, Thetis, Penelakut, Quadra…. there were tiny islands too, reached by swimming from an anchored sailboat, an arbutus or two angling windward from rock.

So it was with delight that I opened the pages of Love of the Salish Sea Islands: New Essays, Memoirs and Poems by 40 Island Writers, published by Mother Tongue Publishing, itself located on Salt Spring Island. (Full disclosure: two of my books were published by Mother Tongue, and an essay of mine appeared in a previous MTP anthology, The Summer Book.) I spent a few hours transported to those west-coast Atlantises, hearing as I read the clamour of gulls following the herring and the ferries greeting one another as they sailed through Active Pass.

What makes an island special? Stephen Hume tells us this: “For me, Saturna is less a place defined by maps than it is a series of enigmatic palimpsests, an awareness of otherness, of dimly apprehended revenants, of older narratives that slowly surface through the glossing of history…. The names on island maps themselves are a palimpsest. The Salt Spring of this generation was the Saltspring of settlers and before them it was the ĆUÁN of the W̱SÁNEĆ People. The Saturna of settlers was the Saturnina of the Spanish and the TEKTEKSEN, “Long nose,” of the Tsawout, or SȾÁUTW̱ as they call themselves in the decolonization of language.”

That layering, with some histories so buried or hidden that it takes clear eyes to see them, is part of the experience of islands, or can be. And the contributors to this anthology share theirs with generous and often lyrical attention. Taiaiake Alfred writes of Temosen, or Tumbo Island: “No human presence remains on the island, or rather, there are only remnants, an old house and collapsing barn abandoned a century ago. When I am there, amidst the collapsed settlement and nature taking back her rock, I feel fully immersed in an unfolding, uncertain and ancient future.” Chris Arnett’s description of soil deposits on Salt Spring Island echoes this sense of deep history: “People have lived on Salt Spring Island for so long that there is a soil type called Neptune that is the accumulated dark sediment of people and their activities in a single location over thousands of years. Some of these deposits are meters deep and cover acres of land.”

Other contributors consider the lilies, and other plant and animal communities. Ann Eriksson remembers Retreat Island, seven acres “give or take a few rocks” off Galiano Island, its “blue-eyed Mary and calypso orchids left to blow in the wind.” Alison Watt writes of a summer spent as a park naturalist on Mitlenatch Island, “its meadows … embroidered with wildflowers, camas and chocolate lilies, sea blush and brodiaea, blue-eyed Mary. Its shore … seeded with sea stars, chitons, snails, mussels, claims; the island set like a heart coupled to light, quickened by spring, slowed by winter.”

Islands make people contemplative. Maybe it’s the light, the long hours of winter, the endless arrivals and departures of ferries. Rex Weyler follows the life-cycle of a dragonfly, specifically a Pachydiplax longipennis, or blue dasher, as he muses on names and the act of naming, specifically Hernán Cortés, the namesake of Cortes Island, a Spanish conquistador who never saw the island, and George Vancouver, who named Desolation Sound for his depression in coastal rain, and various points of land for his wife and daughter so far away. In some ways, this is also the lifecycle of a deadly chapter in colonization, one that left its names as ironic glosses on places already known and loved.

Islands also inspire their residents to take to the water, to know the land from another perspective. Diana Hayes, on a sailboat in the Strait of Juan de Fuca, watches “the sky revealing Orion’s Belt/our faithful compass.” Nancy Turner, retired to Protection Island after a long and distinguished academic career documenting Indigenous knowledge of plants and their environments, circumnavigates her island in a small rowboat:

It doesn’t take much imagination to put myself back in the days before the Europeans arrived here, to picture Snuneymuxw families spread all along the channel, pulling their cedar dugout canoes onto the beaches, camping under framework shelters covered with dense mats of cattail and tule, harvesting their food, preparing their fishnets and duck nets of stinging nettle fibre, and teaching their children the right way to do things.

An island is often a repository of history and memory, ours and the place itself, and many of these essays and poems are like baskets, containing moments both useful and beautiful. Linda Rogers remembers summers on Savary Island, watching “basket-makers from Tla’amin paddle past, imagined swans as graceful as ballerinas and remembered the proverb, ‘They thought they were burying us, but we were seeds…’”

…you glide past summer cottages and wide-porch houses,
where old gardens of corn and potatoes
were once fertilized by dogfish and starfish
where towels dry on rosemary bushes…

Savary Island casts quite a spell in these pages, Mike Redican observing that,

each spring a little more is gone
a favourite arbutus
six sections of fence
thirteen steps leading down to the sea.

Having grown up on a large island (Vancouver) and having lived for extended periods on smaller ones — Crete, and a small island off the west coast of Ireland — I know that they can be insular. This is both a blessing and, if not a curse, then perhaps best summed up by Valdy, via Gary Geddes (who lives on Thetis Island but writes here about Texada Island where he taught briefly in the early 1960s): “… islands are differences of opinion surrounded by water.”

Des Kennedy echoes this, remembering his early years on Denman Island, half a century ago, learning the rules, spoken and unspoken. But he also provides some of the best observation about island communities at their best:

Oh, and the dances that rocked the old community hall in those days! There’d be chairs lined along the perimeter and the centre jammed with the flailing bodies. Doug and the Slugs, Pied Pear and other bands on the hippie circuit squeezed onto the little stage and played long into the night. Halloween dances were especially wild extravaganzas of outlandish costumes and questionable behaviour. Little kids would sleep safely on a bed of coats in the corner.

The stories of how people are drawn to islands can be fascinating. But it’s even more interesting to consider why they remain. How they build lives, build houses and gardens, build community, work to preserve the integrity of place. An island can be a refugium, an ecosystem adrift in its waters. Amanda Hale’s garden on Hornby Island is a testament to the generosity of island gardeners. “Many of the plants and shrubs that flourish here originated in cuttings from friends now dead — Hilary Brown’s bamboo and japonica, Muriel Rogers’ lilac, Jean Woodley’s coral bells, Gerd’s mock orange cutting rescued from the labyrinth at the Festival of Myth….”

And gratitude is often poised against the recognition that our days may be numbered, as Arlene Paré acknowledges on a beach on Mayne Island:

Listen
with the salt sea rising inches each year we say

thank you
standing on the shore with baskets of apples.

This anthology gathers so much within its pages. Beauty, humour (Chris Arnett’s account of a memorial bonfire for a dog killed on the Fulford-Ganges Road on Salt Spring Island made me laugh, and maybe those were tears I was brushing away too), a wistful but pragmatic sense of how the years pass and accumulate, all at the same time, and how important it is to record what we can of those times. Our times. Mother Tongue Publishing has provided us with a wonderful palimpsest, the stories written on rock, beach glass, leaves of grass, old barn wood — and Neptune soil, in Arnett’s memorable comment, “the accumulated dark sediment of people and their activities.” Taiaiake Alfred wrote of being “fully immersed in an unfolding, uncertain and ancient future.”

The best work in this collection invites us to be part of that ancient future, at once part of the process and also witness to the mystery of it, dancing to wild music, islomanes all. I’ll conclude, as the anthology concludes, with Lasqueti Island poet Sue Wheeler’s “Moonlit Night, January:”

Bootprints in snow
from the porch
to where the truck
had been parked.

Tire tracks turning east
not west, out of the driveway

So few secrets on an island

Theresa Kishkan lives on the Sechelt Peninsula with her husband, John Pass. She has published 14 books, most recently Euclid’s Orchard, a collection of essays about family history, botany, mathematics, and love (Mother Tongue Publishing, 2017), and her novella, The Marriage of Rivers, is due out from Palimpsest Press in the spring of 2020. She runs a small press devoted to the literary novella, Fish Gotta Swim Editions, with her friend Anik See.