105 Hikes in and around Southwestern British Columbia
by Stephen Hui, foreword by Cease Wyss (T’uy’t’tanat)

Both books reviewed by Ron Dart 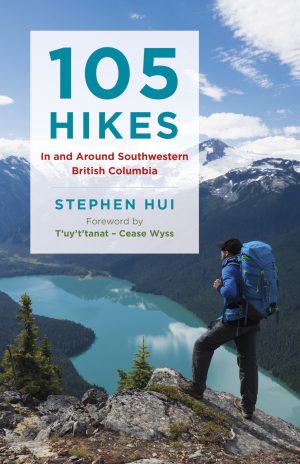 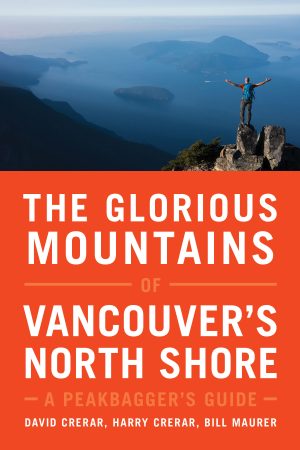 I have, sitting before me, a first edition of the 1973 version of 103 Hikes in Southwestern British Columbia by David and Mary Macaree (Mitchell Press), for which the BC Mountaineering Club provided the initial support. Interest in mountain rambling ever waxed and grew and the second edition of 1980 was yet another bestseller.

Jack Bryceland then took over from the Macarees, and his revised and updated fifth edition of 103 Hikes in Southwestern British Columbia (2001) raised the standards yet higher. Bryceland did later editions too, in which the quality was even more impressive. There was much overlap and continuity between the publications of the Macarees and Bryceland, and the 1973, 1980, 1987, and 1994 editions of 103 Hikes in Southwestern British Columbia established the guidebook as the authoritative guide — a go-to beauty — for those keen on Vancouver-area mountain trails and vistas.

The North, East, West, and South sections are divided into Worthwhile, Good, Very Good, Excellent, and Amazing treks (in ascending order of quality trips), with level of difficulty parsed into Easy, Moderate, Difficult, and Advanced.

I was somewhat disappointed that Jack Bryceland was not mentioned in the kudos offered to Mary and David Macaree in the “Tribute” section at the beginning of the book, and I sense there’s a tale to be told about such an omission.

Each two-page trip description highlights the distance covered, elevation gained, and round trip time, as well as map and many fine photos to draw and interest the aspiring trekker. The general introduction to 105 Hikes ensures a safe and secure trip by those new to the mountains and promises that fine memories remain of days on trails and summits.

105 Hikes In and Around Southwestern British Columbia will stand as the most up-to-date guide book for those interested in exploring various trekking possibilities in the Lower Mainland mountain region of B.C. and northern Washington.

We have been most fortunate in 2018 to have had two books published on mountain trekking and climbs in Southwestern BC. While Hui’s 105 Hikes will stand as a primer and entrée into mountain rambling and hiking, the second book, The Glorious Mountains of Vancouver’s North Shore: A Peakbagger’s Guide, by David Crerar, Harry Crerar (father and son), and Bill Maurer, is designed for those with more mountain maturity, skills, and experience. We have been in desperate need of a definitive and comprehensive guide to many of the peaks on the North Shore and The Glorious Mountains more than fills the bill.

There have been thinner books that point to trails worth the taking and a few summits worth the bagging, but none can match the breadth and depth of The Glorious Mountains. I have been fortunate in the last forty years to have rambled and sat on many of the summits on the North Shore peaks, so I was more than charmed and delighted to ramble and climb (from home, vicariously!) this page-turner of a tome, which in the space of a few months has emerged as the go-to book on peaks on the North Shore.

Each section covered in this attractive volume has its own colour designation for a quick turn to the pages that provide the best and most up to date information for the trip planned.

Replete with superb colour photographs and ample topographic maps to make all treks as simple and attractive as possible, The Glorious Mountains also provides a lengthy and informative introduction worthy of many a reread for those keen on taking to the mountains in a regular and safe manner. Needful points are covered to read, learn, and inwardly digest before one embarks on the challenges that mountain trekking inevitably offers to fortunate adventurers. Nostalgic photos and accompanying history do a superb job of putting West Coast mountaineering in an engaged historic context.

A nod to the North Shore Rescue and Lions Bay Search and Rescue in a valuable entrée to the book as, later on, are the detailed and in-depth “Endnotes” and “Index.”

It is virtually impossible, given the book’s directions to trail heads and routes up mountainsides, to miss the means to bag the diverse peaks. Some, obviously, are more challenging than others. The fact that various routes are aptly articulated up diverse pathways means pleasurable trips can be taken up the same mountain on different occasions. With round trip distances and elevations presented up-front, it’s possible to plan such trips with some predictability — so long as the weather is fine and fair. Of course, when the weather is more moody, time must be budgeted more elastically.

I might add that the text is matched by well-placed photos that highlight both the paths taken to the summits and the views worth seeing from the peaks. Contour maps introduce each section to offer the attentive reader an aerial overview of the broader terrain within which the hikes can be taken. But there is more than mountain terrain exhibited here: we also get an abundance of flowers, flora and fauna, trees, forests and waterways, alpine tarns and mountain lakes, all of which grace the photos.

The Glorious Mountains of Vancouver’s North Shore is now the must-buy sacred text for those keen to cut their mountaineering teeth on the North Shore Mountains — a rite of passage into more demanding climbs in the Coast Range and elsewhere. I was impressed that the authors give a rightful nod to the mountaineering elders who came before them: Glenn Woodsworth and Dick Culbert. A couple of lines will say it all:

We also here acknowledge that the legendary Dick Culbert (1940 Winnipeg – 2017 Gibsons) died just before publication of this book. All devotees of British Columbia mountains are in his debt.

I might add that Woodsworth, Karl Ricker, and Arnold Shives are, in many ways, living elders of such a mountaineering tribe and many other west coast mountain pioneers such as Don and Phyllis Munday require hats to be tipped to their heroic ways.

The publication in 1965 of Culbert’s classic, A Climber’s Guide to the Coastal Ranges of Ranges of British Columbia pioneered and birthed a genre of guides to peak bagging in British Columbia. The Glorious Mountains of Vancouver’s North Shore is very much a child Culbert’s line and lineage — a mature child that includes treks that Culvert never described in such intricate and poignant detail.

This instant mountaineering classic of Vancouver’s North Shore mountains contains both beauty and bounty. The book’s solid research will stand the test of time and provide guidance to those keen to bag the beckoning peaks at our doorstep.