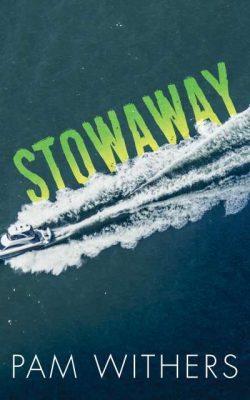 Pam Withers has a staunch following for her many adventure novels. Fans will not be disappointed in Stowaway from Dundurn Press.

Two sixteen-year-old boys of diverse backgrounds, both mourn a lack of friends, and are burdened with secrets they have never divulged to anyone.

This is a complex adventure story, a contemporary one; at its core is the plight of people trying to escape poverty, imprisonment and torture. They are at the mercy of corrupt people smugglers who take their money and frequently betray them. It is about family, friends, and loyalty that is sometimes misplaced.

The story is narrated in the present tense by the two protagonists, Owen and Arturo, and the immediacy of the text instantly immerses the reader, into their lives.

The author begins with a tightly written prologue set in Guatemala City. The streets have been Arturo’s home since he was thrown out of his abusive home at age six. He protects a group of street boys chased by the police, hides them in a dumpster and draws police fire away from them by leaping onto the deck of a boat.

The Captain saves Arturo, saying he is the boat’s first mate. Arturo now lives with the guilt of knowing his charges are in custody or in the hands of gangs: “We’ve abandoned what is now a moving ghost ship. A death boat. A dumpster full of innocent souls – friends? — betrayed. By me.”

Sixteen-year-old Owen was brought up on his Parent’s Marina in Ontario, hence his familiarity with almost any vessel that goes to sea. Withers’ facility in writing about boats is natural and easy to follow, even for the uninitiated.

The family relocated three years earlier to a small island in British Columbia, where Owen helps out on their Marina.

It’s Saturday and his parents are about to fly out for a week’s conference and Owen is determined to make the most of his freedom. He finds the island dull after the excitement of hanging out with his brother Gregor and the friends of whom his parents disapproved — the reason why they moved.

That night there is a storm severe enough to cause a power outage. Owen thinks he sees the shadow of a boat sailing into the bay, and a figure leaps down to secure the boat in an empty berth.

Hours later he is awoken by taps at the window. He opens the door to a thin boy seeking help. The youth – Arturo — speaks in broken English and asks for water and diesel. The boat’s battery is low.

Owen gives him water, and says he’ll come down to the boat in the morning and help fuel up. The air is tense with unanswered questions.

The next day, he meets Captain Jones on board the Archimedes, and refuels as promised. Owen is encouraged by the advice he hears in his head of his absent brother, Gregor, to make the most of his freedom while their parents are away. He stows away aboard the yacht, hiding in the dinghy overnight. In the morning he begs the Captain to let him stay on, just to the next port, a couple of hours away and share chores with Arturo. The Captain agrees, once he discovers that no one knows of Owen’s whereabouts.

The adventure proves to be more than Owen anticipated. He discovers the six Guatemalan youths hidden on the Archimedes, The Captain, cruel, greedy and vicious, beats Arturo for every infraction. Armed pirates board the ship and steal the money paid by the parents of the boys to take them safely to Canada.

Life turns into a nightmare when Captain Jones turns all of them over including Owen and Arturo, to a safe-house keeper who starves and works the boys almost to death on a remote tree planting site. Bonds between Owen, Arturo, and the boys are forged, broken, and renewed. Before they escape and reach safe harbour, their lives are changed forever. The author keeps the reader in suspense until the very end.

The characters are complex, believable, and their problems are real. Even the unseen Gregor is fleshed out. Characters grow and change. Owen learns to ignore the imaginary advice of his brother, and to shed the burden of the role he played in Gregor’s disappearance. He and Arturo help each other to trust in themselves and not to be manipulated by others.

I was particularly impressed by Arturo to whom English is still new: “I’m not good enough to think in English yet.” Withers writes part of the narrative in the voice of someone who is still learning a new language; it is flawlessly done. The dialogue between the Guatemalan boys is similarly authentic. Owen is a strong and likeable voice; he holds the intricate plot together. I love his youthful Canadian sense of humour and his understanding and sympathy for the plight of the boys for whom he eventually takes responsibility. This is an accomplished and riveting novel, beautifully written and researched by a writer secure in her craft.

The story ends on a hopeful note and leaves the reader wanting more. Will Owen achieve his goal of becoming a Coast Guard? What does the future hold for Arturo and the other boys? Might there be a sequel?

I highly recommended Stowaway for ages twelve and up.

A generous gesture: Pam Withers says a percentage of profits will be donated to the Migrant Offshore Aid Station. MOAS has already saved more than twelve thousand lives.

Playwright/writer, Irene N. Watts, was born in Berlin, educated in England and Wales, and has made her home in Canada since 1968. Her trilogy: Good-bye Marianne, Remember Me, and Finding Sophie (Tundra Books, 1998-2002), was inspired by her own journey out of Nazi Germany by Kindertransport. She writes in different genres: picture and chapter books, plays, and historical novels. Her most recent work is Seeking Refuge, a graphic novel illustrated by Kathryn E. Shoemaker (Tradewind Books, 2016). Her favourite awards include the Geoffrey Bilson Award for Historical Fiction, the Western Canadian Jewish Book Award, and B.C.’s Chocolate Lily Award. She is a life member of Playwrights Guild of Canada.