SENĆOŦEN; A Dictionary of the Saanich Language
by Timothy Montler 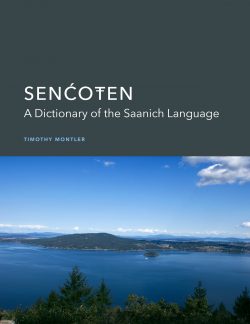 SENĆOŦEN; A Dictionary of the Saanich Language, by Timothy Montler, is the latest in a succession of Coast Salish language reference materials. It is the culmination of Montler’s and others’ collaboration with W̱SÁNEĆ (Saanich) nations. The 1520 page dictionary contains over 12000 SENĆOŦEN (sənčaθən, sen-cha-thun) entries arranged into a highly useable two-way English/SENĆOŦEN, SENĆOŦEN/English format. Almost all entries have accompanying example sentences, except for plant and place names.

A robust collection of place names of Saanich and surrounding territories is conveniently placed under the English entry for “place name.” These are organized according to geographical area. Similarly, plant names are listed under the English entry “plant,” which includes parts of plants (root, flower, bark, etc.) and species. The accuracy of botanical terms was verified in collaboration with the eminent Dr. Nancy Turner, and of course the Elders who constitute the primary sources of information.

One difficulty with creating dictionaries for polysynthetic languages is that words, especially predicates, or verbs, are built by adding affixes (and radical morphological processes such as reduplication, metathesis, and stress shift) to roots and stems. Some Indigenous language dictionaries solve the problem by ordering entries alphabetically by root word; however, these can be difficult for non-linguists to use since isolating the root within often quite long words is not always easy and requires some knowledge of academic linguistics. The SENĆOŦEN dictionary instead simply orders words alphabetically. If the user is interested in the various components of that word, Montler, as he did with his Klallam Dictionary (University of Washington Press, 2012), has added a series of extremely helpful appendices.

The first appendix lists all the affixes, beginning with prefixes, then lexical and grammatical suffixes, each shown within long lists of full word examples. Montler takes advantage of the synthetic behaviour of prepredicate particles to include them in the list of prefixes even though they often stand apart from the predicate. The final appendix is a root index. Though locating a particular root can be challenging, once it is found, this appendix is an extremely efficient way of locating a list of all the (documented) words derived from a particular root. Accompanying each entry is a parsing of all the affixes and radical morphological processes within that entry, as well as a translation.

An important development in North American Indigenous language teaching is a growing emphasis on the morphology. As was done during the development of Montler’s Klallam dictionary, the root index was shared with language teachers (p. xvii). Teachers have found this index of roots to be useful, perhaps as it provides a very quick reference. Affixation adjusts the meaning of a word or its role in the sentence, which will alter how that word is translated. Ordering words with other forms derived from the same root reveals often very subtle semantic qualities of words.

For example, if we consider the root word √qʷəl (ḰÁL), meaning “talk,” we find many words with fascinating semantic connections. sqʷəl’qʷəl’ (SḰEL,ḰEL,) means “story,” a nominal form of the verb for “tell;” šqʷeləkʷən (ŚḰÁLEḰEN) means thought, when the suffix meaning “internal” is added to the root, the denotation of “internal voice or talk” is revealed; qʷelŋən (ḰÁLṈEN), “pain from infection” is the result of the suffix for “a piece of,” creating the image of a piece of one’s body talking. These connections may be overlooked if their common root is not recognized. Providing teachers and students with this kind of information enables learners to acquire the ability, not only to memorize full words, but to build their own words.

The W̱SÁNEĆ (Saanich) community today benefits from at least three generations of speakers who have been very active in the preservation and passing on of the language. Because of them, they have one of the strongest community based revitalization efforts in the country. A key development in any community’s language effort is its decision on an orthography. There are several options available, such as employing a phonetic writing system. This option has the benefit of meshing easily with most existing linguistic research. It is also one of the most efficient systems, being essentially isomorphic, with one symbol representing one sound.

Syllabics, still used in many northern and eastern Canadian languages, have been in use since the 1800s; they are simple to learn and were developed to accurately represent the sounds of First Nation languages. Finally, there are Roman orthographies, using familiar English letters and letter combinations; however, combinations of letters to create single sounds (such as sh, ch, th, tth, tth’, ts, ts’, hw, xw, kw, kw’, txw, and so on) often result in very long transcriptions of words.

Saanich Elder, linguist, and historian Dave Elliott developed a writing system for his language after working with linguist Thom Hess to learn the phonetic system, and with Randy Bouchard to learn his Latin based system. As Montler describes it (p. xi), Elliott combined the isomorphic efficiency of the phonetic alphabet with the intuitive familiarity of Bouchard’s orthography. The result is the all caps orthography used for the SENĆOŦEN language.

A helpful side venture of the publication of this dictionary is the updates to Montler’s old Saanich language resource website. The site now offers an updated and expanded word list with many links to audio examples. A new feature to the site is the spelling converter that converts phonetic transcription to the practical orthography. In addition to the website, Montler is currently working on a SENĆOŦEN grammar modelled after his Klallam Grammar (University of Washington Press, 2015). The Klallam publication provides a very detailed and in-depth reference while avoiding academic jargon to maximize its usefulness to teachers and learners. The grammar also includes many example sentences and learning exercises.

For reasons of accuracy, Montler’s Saanich dictionary includes phonetic orthography beside the standard SÁNEĆ (Saanich) spellings. This is not to suggest that the Saanich system is less accurate, but over the decades of its use, certain inconsistencies in the representation of a few sounds have emerged, especially in the case of some diphthongs /əy/, /ay/, /əw/. By including both the phonetic and the Saanich practical orthography, there is an added requirement of readers to be versed in both writing systems, which many Indigenous language teachers and learners are. The combination of orthographies is an example of the value and benefit of collaboration between academic linguistic and speaker understandings.

As Montler describes in his fascinating introduction, the last forty years of SENĆOŦEN documentation, research, and revitalization have been a voyage of collaboration between at least three generations of community Elders, historians, linguists, speakers, teachers, students, and administrators with the same number of generations of academic linguists; professors, grad students, and researchers. This text will prove to be an indispensible resource for the W̱SÁNEĆ communities and those of neighbouring Coast Salish, and especially Straits Salish nations whose dialects and languages share many commonalities with SENĆOŦEN. It also stands as an example of the value of long-term collaboration between committed and passionate individuals.

Based at Inuvik in the Northwest Territories, Andrew Cienski is a language revitalization specialist for the Gwich’in Tribal Council. He is also in charge of the Gwich’in digital archiving project. Prior to that he worked on linguistic research and curriculum development for the Esquimalt Nation and Cowichan Tribes. He received his MA in linguistics at the University of Victoria in 2010 and is a PhD student in linguistics at Simon Fraser University.