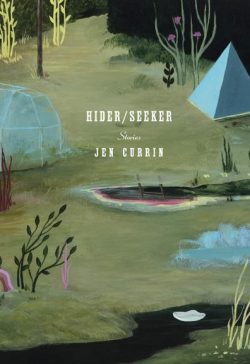 The twenty stories in Vancouver poet Jen Currin’s debut collection of fiction explore the lives of LGBTQ+ characters, in particular their relationships as they fall apart. Loneliness is occasionally assuaged by sex, which is mistaken for love, but emotional connections don’t last or are fraught with difficulty. Characters are hiders and seekers, often both at the same time.

Currin delves into how perceptions of the self by the self and by others can deepen the already challenging situation of gender. Wisely, Currin moves into the subject with a conventional situation in the first story, “The Charlatan.” The narrator, who identifies as queer, is hurt by derogatory language used by a man at the next table in a café and politely tells him. It does not go well.

In the second story, “Up the Mountain,” Currin moves into less familiar territory. Misaki goes to a monastery and binds her breasts as she thinks only men are allowed there. She says, “I am an amateur binder and have wrapped the ACE bandage too tightly — it feels like it is binding my lungs.” She thinks of her breasts as “ridiculous” and obviously is both hiding and seeking. Her experience at the monastery is confusing. While apparently Buddhist, the monastery is rather lax, and Misaki isn’t getting the teaching she thought she would. But she does, and much of what she learns is acceptance of herself.

Misaki reappears in the final story, “Hider,” and she’s still at the monastery, which is experiencing financial difficulty. One new resident named Mark proposes opening a teashop in the city, and the commercialization of what is a spiritual quest is funny and sad. The teacher, Somchai, reacts with his customary patience to the problem, but Misaki has visions of Mark as a lizard. The symbolism is rather heavy-handed, but Currin’s stories are often more about ideas than character. And that is a conundrum, as the ideas swirl around identity. Is it to be explored, developed, or accepted? It seems that some of the characters spend more time trying to be rather than simply being, but I confess to a lack of knowledge about meditation. And I like thinking.

Frequently while reading and rereading these stories I was struck by William Carlos Williams’ assertion “No ideas but in things.” The things of these stories that stick in my mind are the incredibly smelly feet of one man at the monastery; the sex toys in “The Fox,” a melancholy tale of two needy women attempting a relationship based on sex; and a notebook in “A Snake in the Grass,” that prompts a character to remember childhood abuse. But mostly I’m struck by how the characters drift, searching for connection and commitment, sometimes self-medicating with drugs and alcohol and sex, sometimes lost in dreams or nightmares or visions, sometimes angry at what life has dealt them, sometimes passive and waiting for death. But all have been harmed in some way, by parents, lovers, siblings, even themselves. And that aspect of the stories is fundamentally realistic. Everyone suffers.

Currin’s gift lies in expressing volumes in a line or two. For example, in the extremely short (two pages) “After Halloween,” a couple separates. You know it’s irrevocable as one woman leaves: “She holds out her cheek for a kiss. I lean in for her lips. She turns her head and laughs, patting my arm.” Ouch.

Or in “Seize,” a woman named Robin visits her brother, who appears to be drinking himself to death and away from any human connection. Robin cannot help her brother, but helping people matters. On the bus she witnesses a young man having a seizure and a woman taking care of him. The tenderness shown to a stranger is inspiring.

Hider/Seeker has strong language and graphic sex. It’s firmly grounded in the contemporary Pacific Northwest, with an expectation that differences will be tolerated, if not embraced. But as shown in the opening story, that’s not what happens in real life. Currin has an important message about identity and relationships, and fortunately the latent didacticism is almost always tempered by flashes of fascinating humanity.

Candace Fertile has a PhD in English literature from the University of Alberta. She teaches English at Camosun College in Victoria, writes book reviews for several Canadian publications, and is on the editorial board of Room Magazine.