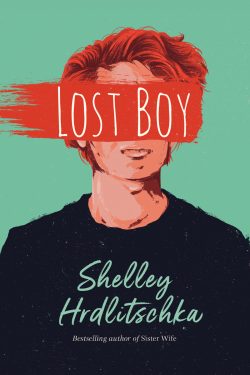 Having enjoyed Shelley Hrdlitschka’s Sister Wife (Orca Books, 2008) — a young adult novel about a fictitious polygynous community in Canada — I was excited to read Lost Boy, the story of a young boy’s escape from Unity, that very same community.

Seventeen-year-old Jon knows no other way of life than the one he has experienced in Unity. Each day is much like the one before, with hours spent toiling in fields, working on construction, caring for younger siblings, or studying the scriptures under the watchful eye of The Prophet, Unity’s dictatorial religious leader. It’s a life that, until recently, Jon has never thought to question.

Until now, that is. And while the Prophet seemingly has the community’s best interests at heart, his rules no longer make sense to Jon. Rules such as the one proclaiming a man must have at least three wives before he can get into heaven. Rules that forbid short-sleeved shirts or listening to music of any kind.

When Jon is caught kissing another girl in the community, he decides to leave Unity before he is banished.

After hitchhiking to the nearby town of Springdale, Jon is taken in by Abigail, a former Unity member who has made it her mission to help the “polygs,” or “lost boys” who, with her help, begin to craft new lives for themselves. She, too, has strict rules, but hers, unlike The Prophet’s, are fair and evenly balanced. Everyone pitches in at this time of transition and everyone is treated with kindness and respect.

With Abigail’s support and encouragement, Jon begins to receive help with his schooling, make some friends, and find work in construction in Springdale.

But while Jon may be free from past constraints, he is unprepared for life outside of Unity, and despite everything he is way out of his depth. He misses his family and he misses the predictability of his former routine. His new world, though exciting, feels foreign and unsettling. A stranger to formal schooling, he falls behind with his studies. His optimism for a better life quickly fades and feelings of hopelessness and fear take over. As a result, it isn’t long before Jon finds himself spiralling into a life of drugs, alcohol, and homelessness.

Lost Boy is told in the first person and the present tense — a style that places the reader right in the middle of the drama and action. The language feels authentic, as does Jon’s increasing anxiety with his new life’s myriad of challenges. And while his fall into addiction is quick, it feels authentic; I understand how naïve and unprepared he is for survival in such a stimulating and chaotic world. It’s hard enough to be seventeen, but harder still for someone who has never experienced a real education or been taught to think critically and for himself.

The novel is told in two parts. Part 1 focuses on Jon’s introduction to his entirely new life, which leaves him excited but feeling like a fish out of water. To say he’s having a hard time keeping up would be a major understatement; everything is happening so fast.

Part 2 begins with a bit of a jolt. Hrdlitschka jumps ahead in time and opens with an effective “one-two punch” narrative style. Jon has hit the skids. He’s living in a crappy apartment, drinking at work, smoking pot, and yes, there are girls.

An early scene in Part 2 perfectly illustrates Jon’s slide into an indulgent and addictive lifestyle:

Charlie tosses me a beer, and I snag it out of the air. I shouldn’t have another one. I’ve already had a few and have to work in the morning, but I’m the only one here who has to get up early, so it’s not like I’m going to get any sleep anyway. The couch is my bed, and it’s groaning under the weight of the people crowded on it. Now I know why this place is called a butt hut.

I crack the tab and take a long swig. It didn’t take me long to figure out that beer numbs everything. Shots of tequila work even better, but after spending a morning puking my guts out behind a job site, I’ve learned to refrain from the hard stuff on work nights.

…I’m on the couch with my arm around Belle. She’s snuggled in deep. Pot always makes her mellow. I hope she’s planning to stay all night on this couch with me.

Poor Jon. Will he get through this?

I really enjoyed Hrdlitschka’s writing style as well as the voice of Jon. The language is simple and direct, and while some scenes do show his emotional side, they are never overly sentimental or syrupy. Jon is, after all, a seventeen-year-old boy.

Lost Boy shows just how easy it can be to fall into hard times when you have no real sense of who you are. Jon has spent most of his days pleasing others, pleasing The Prophet, and strictly adhering to an archaic and twisted set of “rules” by which to live. It’s no wonder that he succumbs so quickly to the temptation that is suddenly all around him.

The novel ends by hinting at what, to me, is an irresistible opportunity for a third story about the young people who grew up in Unity — the girls in particular. I’m not sure if this is part of Hrdlitschka’s future plan; but if it is, I will be first in line to purchase a copy.

Lost Boy is compelling, educational, and well-written. It had me on #TeamJon right from the word go.