On April 9, 2019, Victoria poet Eve Joseph, for her book Quarrels, was announced as one of three Canadian finalists for the handsomely-endowed 2018 Griffin Poetry Prize, along with Ontario poets Sarah Tolmie and Dionne Brand. The winner will be announced on June 5, 2019.

“Like the movements of Minimalism or Ukiyo,” writes Ormsby reviewer Paul Falardeau, “Joseph focuses on individual moments” — such as when she announces her father’s death to his horses and “their long heads bow in consolation.” – Ed.

Postscript: in June 2019, Eve Joseph’s Quarrels was announced as winner of the Griffin Poetry Prize for Canadian poetry. Congratulations, Eve! And thanks again for the review, Paul Falardeau — Ed. 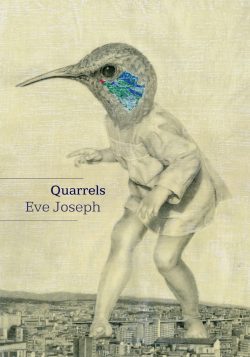 “What is poetry?” is a question that has teased some of humanity’s brightest minds for centuries. The celebrated poet Eve Joseph opens her new book with a quote from W.B. Yeats: “We make out of the quarrel with others, rhetoric, but of the quarrel with ourselves, poetry.” Besides giving her collection a name, Yeats’s quote provides Joseph with fertile ground for her own poetic explorations to take root.

For Quarrels does indeed find the poet at conflict with herself. However, these are not exactly bloody battles. This collection is comprised entirely of short prose-poems, though they are far from simple compositions. Like the movements of Minimalism or Ukiyo, Joseph focuses on individual moments. The recognition here is that the infinite resides in the finite; that every other moment in time and space is the frame of that moment — or, indeed, any particular moment. The quarrels here are in the mind of the poet and her readers alike, and both must struggle to vindicate the coexistence of the infinite and the finite.

Joseph divides the book into three parts to take on this task. Part One is a series of meditations on moments such as these. Part Two tries a different route in reflecting upon the photography of Diane Arbus. The third part is an extended sequence that engages with the death of her father.

Death makes an appearance long before the third act, though. Ultimately death is one of the themes that ties together the first part of the book and links all three parts. Likewise, Joseph frequently drops images of the ocean, such as her room with a view, or Demosthenes shouting at the sea with pebbles in his mouth. There are also many birds throughout, plenty of booze (wine, rum, gin) shared with visits from a plethora of artists, writers, and mythical figures from Aeschylus to Al Purdy. Joseph’s parents make foreshadowing visits throughout the early poems as well.

These themes are not exactly the point as much as they are the stamps of Joseph’s involvement in the moments that are the impetus for the work. A quote by American cultural critic Joan Acocella opens this section: “The goal of art was not the truth but the marvelous — indeed the marvelous was the truth.” The marvellous here is in the small moments that make up Joseph’s experience of meeting — and quarrelling with — the infinite complexity of the surroundings of those moments. Like lotus blossoms, these poems open from a central image into something seemingly limitless. As poet Jack Spicer once confessed, “I am thinking that a poem could go on forever.”

Truth is not set in stone but left to the reader to construct and decide upon. One particularly exquisite example starts as “Light stutters down the closed blinds and builds a spine, one vertebrae at a time,” while the blind is transformed into “a door that could open but remains closed.” Elsewhere, amongst exploding capons and jars of commas are explorations of the minutiae of life that Joseph deftly builds into something more. Along the way, she builds these moments beyond piles of imagery into meaning, a poetic answer to the poetic question:

The trick is to return to the moment. To smell the butts in the ashtray, the air freshener dangling from the mirror. Stairway to Heaven was playing on the radio. God arms himself with his smallest creations.

While the philosophy that Joseph expertly lays over her first two parts is enticing, the third and final chapter is the payoff. After all, when else might the kind of clarity called for to examine eternity in a single moment be found, if not in the death of a parent? Joseph takes the same approach to capturing the moments she shares with her father, connected by the inescapable fact that they are his last.

The result is the culmination of the ideas and moments presented by Joseph throughout the book in a concluding chapter that reveals the height of her prowess for observation and reflection — though for all the talk of eternity, the moment is still a hollow Hallelujah, as death often is. Yet, deserving of praise as she is, Joseph wonderfully ends the book with her retelling the events of her father’s death to his horses, and recognizing the catharsis in the moment when “their long heads bow in consolation — for I know now, that’s what this is.”

Ultimately Quarrels is about Joseph’s journey, but it is also about skewing the definite by enshrining it. Quarrels is also an exercise in the Uncertainty Principle: the closer we look at one moment, the more we see that there is no such thing. The closer we are to understanding, the more we must let go. The moment is every moment, and the more we try to be in the present, the more we can appreciate the past and the future as well. Naturally, after all, the moments do not quarrel; that is only within the poet herself. That is the truth, that is the marvellous, that is what poetry is.

Paul Falardeau is a poet, essayist, brewer and, most recently, an English teacher, living in Vancouver, a city on the unceded lands of the Musqueam, Squamish, and Tsleil-Waututh First Nations, to whom he offers respect and gratitude. A graduate of the University of the Fraser Valley and Simon Fraser University, he has published in the Pacific Rim Review of Books, subTerrain, and Cascadia Review, and he contributed an essay to Making Waves: Reading B.C. and Pacific Northwest Literature (Anvil Press, 2010). He continues to cause trouble as a union member, activist, and a lover of being outside.