#519 Back to Bloody Saturday

Editor’s note: In September 2020, 1919: A Graphic History of the Winnipeg General Strike was announced as a co-winner of the CAWLS (Canadian Association for Work & Labour Studies) Book Prize. For David Lester’s graphic novel work, see also the CBC documentary of August 2020, The repression of 1919’s Winnipeg General Strike: illustrated in the style of a war artist. 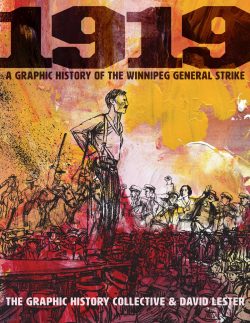 David Lester, a Vancouver-based illustrator, writer, and musician, has a keen interest in history with social justice themes. The Listener (Arbeiter Ring, 2011), among his most notable graphic novels, is a gripping story that moves between Germany during the rise of fascism in the 1930s and the contemporary life of a woman artist. In this most recent book, 1919: A Graphic History of the Winnipeg General Strike, Lester re-visits an important event in Canadian history, employing a simpler linear narrative and emphasizing artfully executed black and white drawings. As a result, a new generation is introduced to a tumultuous event a century ago, when more than 30,000 strikers battled police, vigilantes, and the government in May and June on the downtown streets of Winnipeg. The six-week dispute made international headlines and inspired workers to mount sympathy strikes from Vancouver to Amherst, Nova Scotia.

The operative word defining this book project is “collective.” Other members of the Graphic History Collective collaborated with Lester, as researchers and writers of the text. They are activists, artists, writers, and researchers interested in telling people’s histories in an accessible format. Reading through the graphic novel, it becomes evident that these collective members discovered several lesser-known historical facts, such as the instrumental participation of female striker leaders, Helen Armstrong and Edith Hancox, both members of Winnipeg’s Women’s Labor League. Strikers of diverse ethnicities, including Jewish, Russian, and black Canadians residing in Winnipeg’s North End also played significant roles, though most of the key leaders were British immigrant trade union men.

The collective also ensured readers were given a deeper context around the time and place of the event. Besides the well-informed introduction by James Naylor, a labour and social historian, the opening pages of the story set out the groundwork of the strike. Canada’s nation-building goals are underscored. Commentary on the exploitation of Indigenous people highlights the seizing of land to build the Winnipeg Aqueduct in 1919, impacting the Shoal Lake 40 First Nation. Aboriginal peoples’ resistance in the Riel rebellions is also noted. The other tensions setting the scene for the general strike are the wide economic divide between industrial leaders and working people and the brutal experiences of soldiers in the First World War, who returned home only to experience more hardship, including rising inflation and high unemployment. Workers found inspiration to protest their grievances from news about the Russian revolution of 1917, the German revolution of 1918, and the Seattle General Strike of 1919.

The female telephone operators, known as the “Hello Girls,” initiated Winnipeg’s mass walk-out, leaving their posts at 7 a.m. on May 15, four hours before members of 94 of the 96 unions belonging to the Winnipeg Trade and Labor Council, along with 11,000 affiliated workers, committed the same action. As the strike escalated, returned soldiers and non-union workers became participants, all led by a Central Strike Committee. Accompanying the text, which is written in sparse, concise prose, are more detailed citations at the back of the book. Also instructive throughout are hand-drawn maps and reproductions of primary sources, such as labour bulletins and strike ballot results.

Government and private industrial leaders of Winnipeg gathered in reaction to the strike, forming the Citizen’s Committee of One Thousand. They began to spread messages of fear and division. Despite strike leaders’ assertion that they were fighting for higher wages and collective bargaining rights, their powerful opponents accused them of having Communist sympathies and attempting to overthrow the government. On June 6, the government passed a law to deport the strike leaders. The city’s police force was fired and replaced by “special” police. Six strike leaders’ homes were subsequently raided. Arrests and court cases followed, eventually leading to the conviction of seven strike leaders, given prison sentences ranging from six months to five years.

The marvel is that the strike lasted as long as it did, its climatic and violent end forming several pages of this graphic novel. On June 21, strike leaders called a mass gathering in downtown Winnipeg to protest the government’s repressive actions. Illustrations show people preparing for the protest. Workers perform routine tasks such as washing dishes and combing their hair before heading downtown; while on the other side of the divide, a policeman is depicted blowing a bugle, and another cleaning his gun in readiness to “maintain order.”

At 2:25 p.m., a massive crowd was gathered at Portage and Main, when protesters — or possibly saboteurs — overturned a streetcar and set it on fire, providing the signal for the North West Mounted Police to charge the crowd. Two workers were killed, dozens more injured, and 94 arrested. The day became known as “Bloody Saturday.” Four days later, the Central Strike Committee called off the strike.

The book concludes by examining the legacies of the strike. Winnipeg voters went on to elect several strike leaders to public office and the strike inspired more social movements. Following this hopeful conclusion are Lester’s notes about his drawings in a section entitled “The Art of Labour History.” The back of the book also features a collection of archival photographs and a bibliography.

Writing history through the eyes of hundreds of participants, as 1919: A Graphic History has succeeded in executing, delivers a powerful message that the collective action of people opens the possibilities for significant social change.

Janet Mary Nicol is a freelance writer and retired high school history teacher in Vancouver. She has volunteered with the BC Labour Heritage Centre and is currently on the board of the Ormsby Literary Society. Her writing blog is at http://janetnicol.wordpress.com/