#500 A tall tale from Port Renfrew

Big Lonely Doug: The Story of One of Canada’s Last Great Trees
by Harley Rustad 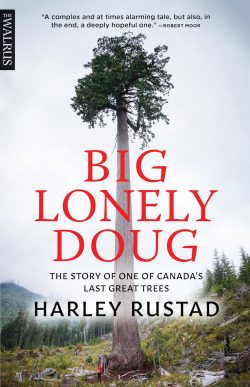 An immense, solitary Douglas fir stands inside a vast clear-cut. Sun-bleached slash stretches in all directions; the tree’s shadow reaches for a nearby second growth forest. Branded Big Lonely Doug by the Ancient Forest Alliance, photographs and posters of this giant crystallized a campaign to help preserve some of Vancouver Island’s remaining old growth forests. The Douglas fir, worth about $50,000 in lumber, was actually saved from the chainsaws by a Vancouver Island logger.

Dennis Cronin was a 40 year veteran of the woods. In 2011 he was surveying cutblock 7190 near Port Renfrew, marking trees to be cut, stream setbacks, and deciding where roads should be built to haul out trees. As he crunched through the underbrush, a mammoth Douglas fir stopped Cronin in his tracks. He estimated it stood 20 storeys high, and was probably 1,000 years old. Author Harley Rustad calls these trees “natural skyscrapers in a dark forests,” and recounts what Cronin did next in Big Lonely Doug:

He walked around its circumference, running his hand along the rough and corky bark. He looked up at a trunk so broad and straight it would hold some of the finest and most valued timber on the coast. Instead of moving on, Cronin reached into his vest pocket for a ribbon he rarely used, tore off a long strip, and wrapped it around the base of the Douglas fir’s trunk. The tape wasn’t pink or orange or red but green, and along its lengths were the words LEAVE TREE.

Why would someone who is paid to harvest trees decide to spare this one? Rustad’s Big Lonely Doug makes us wait for the answer. What began as a 3,000 word story for The Walrus was later crafted into a book that delves into forest ecology, industrial history, government policies, forest practices, environmentalism, pursuit of Indigenous rights, and the ongoing struggle to create sustainable forests and communities.

We’re reminded that the Pacific Temperate Rainforest is the largest biomass on the planet, home to large carnivores like wolf, bear, cougar, deer and elk. Its trees are draped with lichen and moss, utilized by endangered species including marbled murrelets and goshawks. Massive fallen trees become a nursery to new forests. The old growth trees are also huge carbon sinks, absorbing more carbon dioxide than younger trees. Rustad’s Forestry 101 is often evocative: “The western coastline of Vancouver Island ripples like the scalloped blade of a serrated knife.” Massive trees like Western red cedar, Sitka spruce and Douglas fir grow for centuries on Vancouver Island because of its ideal combination of sun, ocean mist, and storms. “While the fog is the texture of this coastline, it is the rain that is the driving force of life.”

It’s no secret that old growth forests have been heavily logged over the last century and a half. Depending on who you believe, there are one — possibly two — decades of logging left in the remaining pockets of old growth. “Today, 99 percent of the original Douglas firs on Vancouver Island and British Columbia’s south coast have been logged.” Its commercial value was seen from earliest contact when James Cook sailed into Nootka Sound and made repairs to a broken mast; timber exports from the Island began as early as 1788. By the mid-1800s, a single 21-metre log could return £100 (about $12,000). Even streets were paved with Douglas firs, from Victoria to San Francisco. A classic gold rush mentality set in as the supply appeared endless, much the way people once regarded salmon. In 1884, the province handed over 750,000 hectares to the E&N Railway to develop the railway. Robert Dunsmuir’s E&N sold its properties to timber investors and coastal logging companies, and by the 1920s, British Columbia was producing half of Canada’s timber.

Forest conservation may seem like a recent impulse, but in 1912 people were already worried about over-harvesting, including Winnipeg native William Roderick Ross, Minister of Lands. He told the legislature that an epoch of “reckless devastation” was drawing to a close. While introducing a new Forest Act, he claimed its priority was “forest conservation” in order to deliver to future generations “their vast heritage of forest wealth, unexhausted and unimpaired.” The act also demanded that timber be cut in local sawmills to help communities prosper — as did Island centres like Lake Cowichan and Port Alberni. This “appurtenancy” clause would eventually be axed by the provincial government, clearing the way for the closure of more community sawmills — and for more log exports. This province’s struggle to add value to its primary resources continues.

The forest industry also became more efficient, moving from hand axes to crosscut saws and from chainsaws to feller-bunchers. City-sized clearcuts (some viewed from space) reflected the new reality in the 1970s and 80s, an industrial onslaught that paralleled the rise of environmentalism. People pushed back on forestry practices and demanded preservation of the remaining old growth forests. To industry, old growth was “decadent” and needed harvesting to prepare for second growth.

To the environmentalists, these rare ecosystems had multiple values: preservation for their own sake and recreational opportunities, while others attached a spiritual significance to them. Indigenous people had utilized and managed these old growth trees for millennia — many ancient cedar trees still carry the marks of being harvested for clothing, baskets, bentwood boxes, and canoes. Campaigns to preserve forests often aligned with the pursuit of Indigenous rights on traditional territories, but as seen with the Pacheedaht on Vancouver Island, old growth forests also provide jobs for their people at their own sawmill.

Ken Wu, a former campaigner with WCWC, left the organization to form the Ancient Forest Alliance, hoping to connect with broader groups of people that included business owners, people of faith, and those from multicultural backgrounds. Rustad also details some of the sophisticated media campaigns and strategies — logging blockades, tree sitting, court challenges, dangerous tree spiking, and counter campaigns like “Forests Forever” from the Council of Forest Industries.

I was drawn to Big Lonely Doug by logger Dennis Cronin’s decision to spare Canada’s second largest Douglas fir. After seeing the tree inside the clear-cut, the Ancient Forest Alliance saw an opportunity and labelled the tree “Big Lonely Doug” as part of a campaign to save nearby Avatar Grove (also their branded name).

However, it was Cronin who chose to let the tree stand. We finally get a sense of why near the end of the book: “It’s like a legacy, ya know?” Cronin said, four years after he saved the tree. “You’re saving something special. Even though I’m a logger and I’ve taken out millions of trees, you won’t see anything like these trees again” (p. 242).

This woodsman possibly did more to raise the profile of ancient trees than any other individual or organization might have. His lone Douglas fir revealed just how fragile old growth stands had become, and how attitudes had shifted within the industry itself. Sadly, Cronin died in 2016.

Today the Sierra Club asserts that the forests of Vancouver Island are “in a state of ecological emergency.” The organization has released maps of remaining pockets of old growth forest, which are now “as rare as white rhinos.” The former logging community of Port Renfrew now promotes itself as the “Tall Tree Capital” and sees its future tied to a large degree with eco-tourism.

This spectacular tree might yet triumph and live to inspire more tall tales. Harley Rustad thinks that the adjacent clear-cuts and remaining old and second growth forests where Big Lonely Doug stands should be turned into a park for all to see, “past, present and future.” Dennis Cronin just might approve.

Mark Forsythe spent his youth in Ontario, two years in Quebec, then landed his first radio job at CFBV Smithers in 1974. He later joined CBC Radio at Prince Rupert in 1984, moved to Kelowna to help establish a new CBC bureau, and joined CBC Vancouver in 1989, hosting CBC Radio current affairs programs, including BC Almanac for 18 years. Mark co-authored four books with listeners about BC history, culture and recreation. The most recent — From the West Coast to the Western Front: British Columbians and the Great War (co-authored by Greg Dickson and published by Harbour) — won the BCHF Lieutenant-Governor’s Medal for Historical Writing in 2014. Mark taught Writing for the Media at BCIT for 10 years and retired from the CBC in 2015. He lives in historic Fort Langley, where he volunteers with the Langley Heritage Society, sits on the council of the BC Historical Federation, does freelance journalism work, and dreams of more travel adventures in B.C. with his wife Cat. Mark knew he was truly retired after receiving a Lifetime Achievement Award from the Radio & Television News Directors Association.

One comment on “#500 A tall tale from Port Renfrew”