Shaping the Future on Haida Gwaii: Life Beyond Settler Colonialism
by Joseph Weiss

I’ll admit that I approached Dr. Joseph Weiss’s Shaping the Future on Haida Gwaii: Life Beyond Settler Colonialism with a not-insignificant amount of trepidation. Another ethnographic examination of the Haida Nation and its citizens by an academic with no initial relationship with people or place? At a time when Indigenous Peoples in general and the Haida Nation in particular are powerfully articulating and acting on their rights to tell their own stories on their own terms? In a place where anthropological research has an extractive history parallel to those of the forestry, fishing, and mining industries?

Weiss — of the Department of Anthropology, Wesleyan University, Connecticut — both acknowledges and seeks to respond to many of these questions in his account of how Haida citizens identify and enact different types of futures for the islands and their people. The book opens with an introduction to the places and people who make up the Haida community in Gaw (Old Massett), where Weiss engaged in five years of ethnographic research. This is followed by an exploration of the academic theories that have informed the framing of Weiss subsequent arguments. 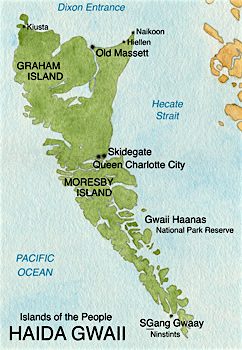 Weiss’s careful analysis of these three interrelated forms of Haida future-making as powerful interventions into ongoing settler colonialism on the archipelago is intriguing on a number of counts. First, his analysis provides a distinctive lens through which to understand how Indigenous Peoples are actively pursuing their rights to sovereignty and self-determination. Weiss’s approach sets it apart from other recent contributions in the field. As a form of resistance, future-making is notable as a simultaneously pervasive and — perhaps for that reason — relatively overlooked and powerful tool for Indigenous Peoples. “Haida future-making unsettles,” Weiss concludes. “It does not overthrow colonial domination, nor does it carve out an autonomous Indigenous space within Canada; rather it proceeds through … situating Haida people as necessarily in relation to and in relations with non-Haida. But this also has potential power” (p. 184). Weiss suggests that we must pay close attention to and create space for future-making as a form of resistance, both in practice and in scholarly analysis.

Second, Weiss’s account successfully mirrors the nuances and complexities of a dynamic Haida present. Rather than portraying Haida future-making as a cohesive and universally-shared project, Shaping the Future on Haida Gwaii is told from the various and, at times, contradictory vantage points of Haida citizens who, in turn, occupy a range of social positions within Haida society. For those with an academic bent, the result is culturally-informed and engaging scholarship. For the rest of us, it makes for an informative and interesting read.

Third, the forms of future-making described by Weiss are both widespread and significant in Haida Gwaii. As a resident of Haida Gwaii with professional and personal ties to the Haida Nation, I was impressed by how Weiss described and interpreted familiar localisms — for example, his jokes about “Haida time” and hippies — in ways that made me think afresh about themes like governance, settlement, and time.

However, I was also struck by the omission of a critical theme in Haida future-making. What happens once Haida claims to title of the lands, waters, seabed, airspace, and all living creatures of Haida Gwaii are recognized by the Canadian courts? (The Haida Nation is currently engaged in an active title case with the B.C. Supreme Court.) There may be excellent reasons for this omission, including the sensitivities around this type of future-making and the extent to which this topic came up in the course of Weiss’s research.

Shaping the Future on Haida Gwaii is adapted from Weiss’s Ph.D. dissertation, and it shows. His intricate (and at times bewildering) phrasing and whimsical word choices can sometimes be challenging to follow. Some of his interpretations of Haida future-making come across as excessively critical, particularly his chapter “Of Hippies and Haidas,” where he argues that the predominantly-settler community of Tow Hill, near Gaw, is guilty of similar crimes as other resource-based settler communities through the consumption of a commoditized “wilderness.”

In other instances, the work comes across as naïve. For example, Weiss notes that “Old Massett is not … a static space … instead it is a dynamic and shifting social landscape” (p. 5), a conclusion that is both obvious to anyone who has spent any significant time in small and remote communities, and vaguely condescending.

On balance, however, Weiss’s respect and relationships with the residents of Gaw and his commitment to ethical, reciprocal, and meaningful research comes through in this intriguing book.

Molly Clarkson has a BA and MA in Human Geography from the University of British Columbia. She lives with her partner in HlGaagilda / Skidegate on the Haida Gwaii archipelago, where she works for the Council of the Haida Nation’s Marine Planning Program.