Departures: Chronicling the Expulsion of the Japanese Canadians from the West Coast, 1942-1949
by Linda Kawamoto Reid, John Endo Greenaway, and Fumiko Greenaway 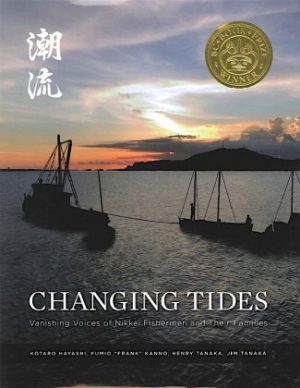 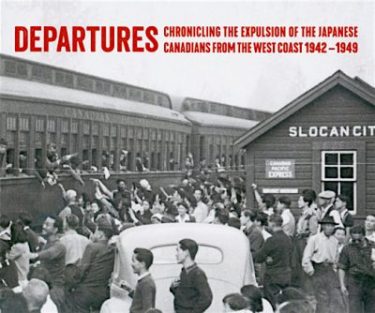 For over three decades, few Japanese Canadians said much about their wartime experiences even to their children. This began to change in the mid-1970s with the publication of Ken Adachi’s The Enemy that Never Was and commemorations of the centennial of the arrival of what was believed to be the first Japanese immigrant to British Columbia. Since then many popular histories, personal recollections, novels, and scholarly studies have appeared.[i] The Nikkei National Museum recently published two more contributions to this growing historiography. Both go over well-known territory, but also introduce fresh material.

The handsomely illustrated Departures: Chronicling the Expulsion of the Japanese Canadians from the West Coast of BC in 1942 is a fine survey of the experiences of Japanese Canadians after their expulsion from the coast. In a brief preface, John Endo Greenaway explains how when he took over the project from his late mother, he sought “to get across as best we could what the people in the camps felt and ate and witnessed … and the poetry that it all elicited; not necessarily to show the injustice of all (although it was unjust) just to show what it was.” He also wanted to show that “the internment experience continues to resonate” (p. 7). Thus, he added poetry and other items created long after the war was over.

The resulting format is somewhat akin to a scrap book as it intersperses brief excerpts from published memoirs including Barry Broadfoot’s Years of Sorrow; Years of Shame; Muriel Kitagawa’s This Is My Own: Letters to Wes and Other Writings on Japanese Canadians, 1941-1948, and Stone Voices: War Writings of Canadian Issei edited by Keibo Oiwa with some from less well-known sources.

Some previously unpublished memoirs, contemporary photographs, drawings, documents, maps, and recipes for Japanese foods are included. Such a montage could easily lead to a jumble of information, but the volume is logically organized chronologically and geographically.

The authors assume that all readers are familiar with the reasons for the departure of Japanese Canadians from the coast. Failing to explain these reasons makes this evocative collection less useful than it could be as an introduction to the wartime experiences of Japanese Canadians. The book begins with the shock on receiving the order to leave, the sale of belongings, the sojourn of many in the agricultural barns of the Pacific National Exhibition in Vancouver, and the relocation inland.

Initially, able-bodied men were employed building roads in British Columbia, Alberta, and Ontario; older men, women, and children went mainly to camps in the interior of British Columbia, which are treated individually. Brief mention is made of work on the sugar beet farms of Alberta, Manitoba, and Ontario, of the handful of Japanese Canadians who were permitted to remain at the coast because of their marriage to non-Japanese, the later movement to eastern Canada or Japan, and the experiences of those who served in the Canadian Armed Forces.

An introduction by Linda Kawamoto Reid pointing to some of the themes that emerge, a glossary of Japanese words, and a brief explanation of the use of such terms as “internment” and “repatriation” enhance the book. While not offering a great deal of new information, Departures presents the wartime experiences of Japanese Canadians in an accessible and attractive manner.

Like Departures, Changing Tides: Vanishing Voices of Nikkei Fishermen and Their Families is accessible, generously illustrated, and well-organized, but it is more focussed and offers mainly original material. References to the war and the return to the fisheries after the war naturally occur in many stories, but the centrepiece is the experiences of fishermen, fish buyers, and boat builders. Save for a few written memoirs, interviews with the people involved, their spouses or offspring are the sources.

Changing Tides is the third and final volume in a series designed by the Nikkei Fishermen’s Reunion Project to commemorate Nikkei accomplishments in the fishing industry and to give current and future Nikkei and others a better understanding of Japanese Canadian history. An illustrated biographical dictionary was published in 2007, and Spirit of the Nikkei Fleet: BC’s Japanese Canadian Fishermen, a narrative history by Masako Fukawa, was published by Harbour in 2009. Changing Tides complements Spirit of the Nikkei Fleet by providing first-hand accounts of the experiences of Nikkei fishermen. Fortunately, work began on the project in 2001. Several interviewees, the “Vanishing Voices,” have since died.

The six chapters cover the history from the 1890s through the federal government’s buy-back program of fishing licences in the late 1990s almost to the present day. Each chapter begins with a few pages sketching the background of its theme and is followed by excerpts from interviews or memoirs. Inevitably, there is some repetition of facts, but the people quoted represent a broad cross-section of Nikkei society. Many were Canadian-born (often in the Steveston Japanese Hospital), others came from Japan before the war, and a few were post-war immigrants with family ties in Canada.

The recruitment of Nikkei fishermen, their dealings with the canneries, the risking of their lives in storms, and coping with declining fishing stocks and increasing government regulations would resonate with other fishermen. There are stories of competition for the best fishing places along the coast and in its rivers as well as instances of experienced fishermen sharing their knowledge with new ones. Many interviewees refer to changes in technology and to the specific methods of fishing for salmon, cod, and shrimp. Although only three women are represented in the text, several interviews reveal how fishing was often a family project with women handling the business end of the enterprise and fathers training their sons to take over.

Despite differences in scope and presentation, Departures and Changing Tides are complementary. Both are welcome contributions to the growing historiography about the Nikkei in British Columbia.

Patricia E. Roy, a native of British Columbia, is professor emeritus of History at the University of Victoria where she taught Canadian history for many years. Her own research has been mainly in the field of British Columbia history and she is best known for her trilogy of books on the responses to Chinese and Japanese immigrants: A White Man’s Province (1989); The Oriental Question (2003), and The Triumph of Citizenship (2007). All were published by UBC Press. Her longstanding interest in B.C.’s political history resulted in Boundless Optimism: Richard McBride’s British Columbia (UBC Press, 2012). Her latest book is The Collectors: A History of the Royal British Columbia Museum and Archives (Victoria: Royal British Columbia Museum, 2018).

[i] A now dated overview of some of these titles may be found in my historiographical essay, “From Exclusion to Inclusion: An Informal Historiographical Memoir about East Asians in British Columbia,” BC Studies, 188 (Winter 2015/16), pp. 91-106.