The Drifting Archipelago: The Middle Years
by Mike Doyle 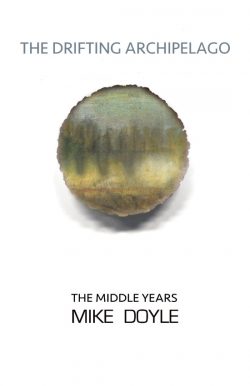 Mike Doyle (1928-2016) is with us no more, but his three-storied autobiography tells much about his layered and all too human journey.

Floating Islands: A Writer’s Early Life (Ekstasis, 2015) opened the portal into Doyle’s life, while The Drifting Archipelago: The Middle Years (2017) is mostly focused on Doyle’s teaching, writing, and lived life from 1968-2002. The forthcoming Cutting Knots: The Later Years (Ekstasis, 2019) will do exactly as the title suggests — as the journey comes to its inevitable end, knots must be severed and cut in all sorts of ways. But first, to The Drifting Archipelago.

Doyle’s more settled and rooted literary years in Victoria from 1968-2002 are front and centre in this second of his fast-paced memoirs. Five major themes emerge again and again in Doyle’s reflections on his years that have flown.

First is the drama (at times melodrama) of his marriage with Norah (and Doyle’s multiple probes into their oft-contentious relationship and years-long and agonizing separation); his much shorter relationship with Rona; his “going solo;” the raising and maturing of the children (and his children having children) into married adults; and Doyle’s broader Irish family connections. In short, much of The Middle Years circles round and round the finely textured nature of frayed family relationships (immediate and extended) and reflections on his family, which nurtured and was provided much beauty and hope.

Second, Doyle’s vocation as a poet, literary critic, professor of English at the University of Victoria after 1968, and literary biographer is a golden thread that run through this charmer of a read. But which of the four threads was closest to Doyle? The answer is apparent the more the reader joins Doyle on his journey: poetry. Doyle’s poetic pathway became obvious in his emerging years; his time in New Zealand clarified his poetic centre and core; and his years on Vancouver Island (with its literary in-house tribal tensions and clashes) forced Doyle to find (as much as he could) his unique poetic voice and speak from such a place.

The fact that Doyle was, when younger, impacted by the Black Mountain Tradition (as were many Canadians at the time) and the American poet Cid Corman (with whom Doyle had a lengthy correspondence) meant that for Doyle to find his score sheet, much weaning had to be done. Many are the comments (sometimes repeated) by Doyle in The Drifting Archipelago where he clarifies both his attraction to the Black Mountain clan and Corman, followed by his conscious distancing from them. Matthew Arnold’s term “felt life” suggests Doyle’s north star in this journey.

Third, when Doyle arrived in Victoria in the late 1960s, Canada was going through an upsurge of nationalism and various forms of patriotism. There was a decided tendency to recognize that Canada had a distinctive heritage and that this needed to be supported and affirmed. Doyle had partially left New Zealand as a flight from nationalism, and when he encountered it in Canada and on Vancouver Island, he tended to recoil, and his contrarian temperament would not be silent.

Doyle lists many of the Canadian literary worthies he encountered in The Drifting Archipelago (some he holds uniquely high, including Purdy, Lillard, and Birney), others he has mixed reactions to (Skelton, Layton, Woodcock), of some he seems disappointed that nothing emerged (Mackay and Zwicky), and others are dismissed with a wave of the hand. There can be no doubt, though, that for those interested in a review and evaluation of the Canadian literary scene from Doyle’s perspective, this is a must-read book. He always nudged nationalism to the edges and placed some form of international or cosmopolitanism at the core.

Fourth, Doyle was an Irish Catholic with decided left-of-centre sympathies, as manifested in his work with peace movements; with St. Vincent de Paul Society (fourteen years); Pax Christi’s B.C. branch; his contribution to “Medicare at Risk;” his contribution to Warren Magnusson’s The New Reality: The Politics of Restraint in British Columbia (New Star Books, 1984, contra the Social Credit party of Bill Vander Zalm); board member of a halfway house; and a founder of the men’s movement in Victoria in the 1990s. Doyle has many an incisive thing to say both about the men’s movement and Robert and Ruth Bly.

Doyle’s compact insights on 9/11 and the deeper historic reasons why this happened are apt, pertinent, and to the point (pp. 210-11). Doyle’s poetic career and social justice concerns overlapped many times, but his poetic vocation remained as his social and political concerns wavered and were eclipsed.

Fifth, Doyle’s “A Brief on the Partridge Affair” (Chapter 5) is a must read for those interested in a controversial moment in the history of the University of Victoria. In 1971 the student newspaper revealed that Bruce Partridge, president of the university since 1969, had two academic degrees from the Blackstone School of Law, a mail order college in Chicago. Doyle reflects how, with some distance and the wisdom of years, he would have handled his role in the Partridge Affair in a different way and manner. Doyle provides much retrospective pondering in these twenty pages in which, as the acrimony heated up and light seemed to subside, Partridge resigned from his post in 1972. Doyle’s varied reflections for those either interested in the “affair,” or those who were in the midst of it, makes for a good read.

In sum, Mike Doyle’s The Drifting Archipelago reminds me of the proverbial fox that traverses much terrain but lacks the hedgehog’s depth and digging. Doyle covers names, books, places, articles, lectures, dates, and experiences with much haste and sometimes repetition. Such an approach does make for an amiable and compelling sight-seeing approach to Doyle’s journey, but there were moments in which I had hoped he’d slow down and do some deeper hedgehog probes.

There can be no doubt, though, that The Drifting Archipelago: The Middle Years is worth the lingering read for those interested in West Coast and Canadian literary life, and for some important facets and nuggets of the university and political life of British Columbia. Doyle was on front stage for many significant acts in the unfolding drama and his memoir is more than worthy of the hearing.

2 comments on “#455 A Victoria literary memoir”