The Collectors: A History of the Royal British Columbia Museum and Archives
by Patricia E. Roy 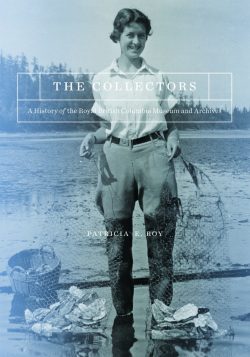 In The Collectors: A History of the Royal British Columbia Museum and Archives, Patricia Roy sets herself a daunting task: to write the history of not one but two provincial institutions over a period of 130 years, chronicling the individuals who worked for them, the initiatives they pursued, and the vagaries of governmental policies that determined what resources they should have.

This ambitious history is complicated by the fact that from its beginning, the museum was given a dual mandate. First, it was “to secure and preserve specimens relating to the natural history of the Province … and to obtain information … increase and diffuse knowledge regarding the same.” Second, it was “to collect anthropological material relating to the aboriginal races of the Province.”

Roy has responded to the challenge by producing a clear, carefully-researched narrative which follows the course of these three streams — natural history, Indigenous peoples and archives — from the founding of the Provincial Museum (1886) and Provincial Archives (1908) to the 2003 merger of the two into the Royal British Columbia Museum and Archives. Through the decades, it was the first of these streams that received the most attention and funding. In step with the branding of the province as “supernatural British Columbia,” the collection, study, and display of the region’s geology, flora and fauna made sense to government officials, residents, and tourists alike.

The second stream was a harder sell. Well into the 20th century, the museum was stuck in its original salvage mode, collecting “curios,” artifacts, and even human remains of what were widely seen as B.C.’s “vanishing Indians.” The work of anthropologist Wilson Duff and Kwakwaka’wakw totem-pole carver Mungo Martin for the museum was among the first to treat Indigenous cultures as living, breathing entities. The third stream — the Provincial Archives — is of special interest to the historian. After a promising start, the archives suffered through budget cuts and indifferent archivists until put on more professional footing in the 1940s.

Part of the problem was that the most competent and experienced staff through that time were not deemed appropriate candidates to lead the institution. The work of Alma Russell, Muriel Cree, and Madge Wolfenden to stamp some sense and order on the collections went largely unheralded. Roy has located photos that bring these remarkable women to public notice.

Roy’s history of these provincial institutions has a distinctly Whiggish trajectory: it is an upwardly moving arc to as each generation contributes what it can to the overall progress of the institutions. Of course, mistakes were made along the way. On the eve of the First World War, the museum was preparing to move into rooms in the recently constructed Provincial Legislative buildings.

In what must go down as one of the worst decisions in the institution’s history, officials turned down an offer made by Emily Carr to house her collection of 200 paintings on Indigenous totem poles and villages in an art gallery proposed for the new digs. Six decades later, when a newly elected Social Credit government wanted to sell the province to the world, it proposed a European tour of B.C.’s most famous artist. They were told neither the museum nor archives had enough Carr paintings to mount such an exhibit.

At times, Roy’s Whiggish tale pulls its punches when a sharper critique of the museum is called for. During much of the institution’s history, Indigenous peoples were seen as a dying, or at least diminishing, race, and their cultures treated as static and pre-modern. It is not enough to say, as Roy does, that museum personnel were simply expressing the attitudes of the times, nor to categorize their approach as “paternalistic.”

We need to know how, over its long history, the museum’s efforts contributed to the wider view that the immigrant peoples who took over the province were somehow superior to the Indigenous peoples they dispossessed. This viewpoint was not so much paternalistic as colonialistic.

The later chapters of The Collectors are stronger on this. Here Roy does an admirable job of describing how the museum’s stance towards Indigenous peoples evolved from its early days as collector, through the breakthroughs of Duff and Martin, to the most recent efforts that build on the active participation and initiative of Indigenous peoples. Roy’s discussion helps us navigate current issues — such as the repatriation of artifacts to their rightful owners — and consider the way forward.

Notably, Roy paraphrases the criticism of Gloria Frank, a member of the Nuu-chah-nulth Nation and then a graduate student, who in a 2000 BC Studies article, “That’s My Dinner on Display,” expressed resentment at “seeing her people displayed as anthropological specimens.”[1]

Might it not be time to undo this century-old conjoining? The way forward may be to create two provincial museums: a B.C. Museum of Natural History on one hand, and a Museum of Human History of British Columbia on the other. The archives, which lost much of its autonomy when the government merged it with the museum in 2003, could be attached to the latter and gain some of that autonomy back. This may be the step needed to achieve what Roy notes: “The museum is now working on a storyline that will present a single inclusive narrative of the history of Indigenous peoples in BC and of later arrivals.”

Should this question ever be taken up for discussion, Patricia Roy’s The Collectors would provide a good starting point.

Born in Winnipeg, where he spent his first fourteen winters before moving to the gentler climate of Abbotsford, Chad Reimer has a BA Honours degree in history from UBC, and MA and PhD degrees from York University. He is the author of Writing British Columbia History, 1784-1958 (UBC Press, 2010) and Chilliwack’s Chinatowns: A History (Chinese Canadian Historical Society of British Columbia, Gold Mountain Stories, 2011). He has also contributed articles to BC History and Pacific Northwest Quarterly. His latest book is Before We Lost the Lake: A Natural and Human History of Sumas Valley (Caitlin Press, 2018). Chad Reimer taught for some years at the University of the Fraser Valley and now lives in Chilliwack.