Raven Walks Around the World: Life of a Wandering Activist
by Thom Henley 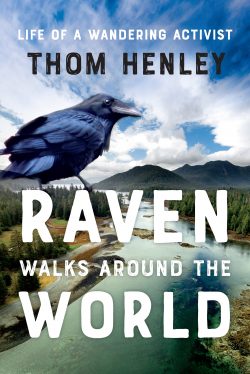 Autobiographies by environmentalists are nothing new, especially in B.C. Greenpeace alone is its own cottage industry, with practically all of its founders producing their own work, some of them multiple times over, including Robert Hunter, Rex Weyler, Paul Watson, and the “confessions” of the contentious Patrick Moore.

Then there are the works of Canadian luminaries like David Suzuki, Elizabeth May, and Sheila Watt-Cloutier, whose memoirs serve equally as reflective journeys and as additional works of activism. Even within this increasingly crowded field, though, Thom Henley sets himself apart with his addition by the sheer breadth of his experiences.

Like Forrest Gump or Huckleberry Finn, Henley (whom many refer to as “Huck” or “Huckleberry,” in fact) has had a knack for being in the right historical place at the right historical time. Indeed, the title of the book, Raven Walks Around the World is the name the Haida gave Henley — Yaahl Hlaagaay Gwii Kaas — after he was adopted by Mary Yeltatzie Swanson into the Yagu Laanas Clan for collaborating with the Haida for decades, capturing both his “wanderlust” and his penchant, like the curious and trickster Raven of their nation’s stories, for “making fortunate discoveries by accident” (p. 187).

Indeed, examples of serendipity and of Raven’s “mysterious ways” run throughout the book, connecting the many stories of Henley’s life.

These experiences include escaping Michigan and Alaska as a draft dodger to settle in Haida Gwaii, where Henley would find himself a founding member, along with many Haida and non-Haida alike, of the decades-long campaign to save South Moresby Island and create Gwaii Haanas National Park.

Henley would also become wrapped up in other environmental and human rights causes, including campaigns against supertankers off the coast of Kitimat and for rainforest preservation in Borneo; he would cofound Rediscovery, the global wilderness education program for Indigenous and non-Indigenous youth; and he would publish multiple well-received works on Haida Gwaii, wilderness education, and the Penan of the Borneo Rainforest, among other subjects.

Henley would also travel (often by kayak) to more than 130 countries and every continent, both as an activist and an educator, and the stories of his travels lend a degree of adventure and excitement that is also rather different from run-of-the-mill activist memoirs that can focus too much on political ins-and-outs.

What really draws the reader in, though, are the stories of the eclectic group of people that Henley met and worked with throughout his life of activism.

These include impressive celebrity encounters with the likes of Pierre and Justin Trudeau, Al Gore, James Cameron, and Jane Goodall, and friendships with others like Bill Reid, David Suzuki, and Wade Davis. The most engaging characters are those with whom Henley worked for most of his life.

But none figure more prominently than Guujaaw. Now a Haida chief, we are introduced to Guujaaw, along with Henley, as a young Gary Edenshaw in the early 1970s, when the Save South Moresby campaign was first concocted by both of them, and he remains a fixture for much of the rest of Henley’s narrative.

Guujaaw’s recurrences include helping Henley host Pierre Trudeau and family at Henley’s remote cabin in Lepas Bay, leading the Lyell Island blockade that saw Haida elders infamously arrested by the RCMP in 1985, guiding the Bill Reid-crafted Lootaas from Vancouver to Haida Gwaii, and apprenticing with Bill Reid, amongst many other fascinating and often powerful stories.

There is a journey that the reader takes with Henley in this book, in other words, one that makes it clear that he never acted alone in any of his many accomplishments, and indeed leaned heavily on the knowledge and experience of others, collaborating with friends and acquaintances every step of the way.

Ultimately, the reader is left struck by a few things in this gem of a memoir: the evocative power of Henley’s direct and eloquent prose, the potential to effect great change through friendship and collaboration, and, above all, that serendipity and a sense of adventure are just as important in successful environmental activism as serious dedication.

Based in Vancouver, Philip Van Huizen is a visiting assistant professor in the History Department at Western Washington University in Bellingham. His research focuses on energy and the environment in the North American West and has appeared in BC Studies, The Pacific Historical Review, and in the McGill-Queen’s University Press collection edited by Ruth Sandwell, Powering Up Canada (reviewed by Daniel Gallacher in The Ormsby Review #197, November 7, 2017). He has also co-edited, with Asa McKercher, a book on Canadian international history, Undiplomatic History: The New Study of Canada and the World (McGill-Queen’s University Press, 2019). Philip is completing a book manuscript on the Canadian-U.S. High Ross Dam controversy.