This book moved me in unexpected ways. Having spent a good deal of 2013 and 2014 living and working on the west coast of Vancouver Island, I found that each page of Streetly’s expressive prose evoked surprisingly sensual memories of the smells and sounds of the coast. With her words I could taste the salt spray, feel the pulsing waves against the boards of a boat, and hear the groaning limbs of giant cedars in a storm.

Anyone who has lived in and loved places on British Columbia’s outer coastline will recognize the love song Streetly sings. Readers who haven’t made the pilgrimage down Pacific Rim Highway 4 to Tofino will certainly be drawn to do so by her tales, although they originate in a time when the area wasn’t quite the tourism hotspot it is today. Her stories present a different portrait than the tourism brochures, one that is far more nuanced and doesn’t gloss over the complex politics and practicalities of making one’s home on the edge of the wild Pacific.

Joanna Streetly is a freelance writer and illustrator who has called the Tofino area home for the last 25 years. Raised by English parents, she grew up in Trinidad and Tobago until moving to England for school at age eleven, and then to Canada, aged seventeen, to pursue a degree in Outdoor Education. She worked for years as a sea kayak and whale-watching guide on the west coast of Vancouver Island, and her water-based adventures provide fodder for this engrossing collection of short stories.

Streetly’s autobiographical work is organized into a series of vignettes, with each story centred around a personal experience of danger, sometimes life-threatening, that was particularly linked to her chosen life and lifestyle of living on the Island’s west coast. Her vignettes are complemented by illustrations and self-drawn maps to visually situate the places featured in her stories.

Aside from her evocative and poetic writing, one of the things that makes Streetly’s book stand out is how she weaves together a complicated narrative of place that avoids many of the problematic tropes of nature and adventure writing. She does not gloss over that her experience was shaped by her own position as a newcomer to territory occupied since time immemorial by Nuu-chah-nuulth peoples, or her status as a woman in the masculine space of maritime travel and “wilderness” living. Instead, she thoughtfully interweaves her awareness of the complex politics and culture of the west coast environment with poetic and highly personal narratives.

As her narratives progress through her own time on the coast, she learns from various close calls that ecological knowledge is something to be continuously built. She purposefully cautions against the temptation to play the role of the over-confident local when it comes to moody west coast weather. Her lack of arrogance is striking because it is refreshing in a genre often dominated by writers who characterize danger as exceptional (disaster strikes!), or as so everyday that the narrator occupies the role of the humble hero facing challenges on behalf of home and hearth (the fisherman protagonists of reality shows come to mind).

Instead, she carefully shows how her own decisions led to each brush with danger and how they could have been avoided. She emphasizes that these perils were not exceptional and that she was not particularly heroic in facing them. In her narrative, she describes a wilderness where forces of nature are something to live with, not battle against. The lesson to be learned from her tales is not one of courage or forbearance, but of respect, humility, and patience. Chance has a role in the encounters she describes, but so does knowledge of people and places.

Particularly poignant is one of her last tales, where her simply knowing a local person’s name defused a potentially dangerous situation. Her tales are not stories of “man vs. wild,” but of a multi-faceted person developing an intimate relationship with an environment that is equally complex, both in the human realm of politics, community, and relationships, and in the non-human sphere of wind, water, and wildlife.

Streetly’s tales in Wild Fierce Life are not just of danger, but of home-making. She tells of learning to negotiate the rhythms of the local environment, including tides and currents. She writes of building a float-house, chopping wood, and docking boats, alongside narratives of relationships, friendships, and motherhood. Her deep love for her home seeps into every sentence, and although her stories may superficially seem to be tales of danger and adventure in terms of plot, they read like love poems.

Streetly approaches potentially divisive topics such as Indigenous rights, colonialism, and environmentalism through storytelling in such a way that she comes off as thoughtful rather than sanctimonious. That is not to say her stories are apolitical, but rather that her focus is on the personal and intimate ways in which she has connected with a particular but complex place. 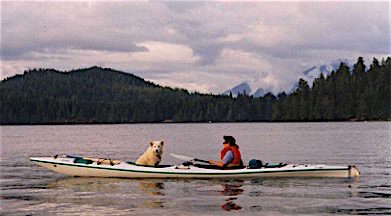 Those looking for an alternative to chauvinistic survivalist narratives of humans enduring in a hostile natural world will find respite in Streetly’s words. Those who have lived in a “wild” place will find some of Streetly’s experiences familiar, while those who have not will be impressed by her unique ability to render wilderness beloved without overly romanticizing it.

I have never seen “danger” used so thoughtfully and provocatively as a narrative device and I cannot wait to read more of Joanna Streetly’s work.

Lauren Harding is a Ph.D. candidate at the University of British Columbia in the Department of Anthropology. Her dissertation research was conducted on Huu-ay-aht and Ditidaht territory on the west coast of Vancouver Island in Pacific Rim National Park Reserve. She is writing a cultural history of the West Coast Trail, with a focus on settler-Canadian recreation practices as a form of nation-building and the intersection between different cultural conceptions of wilderness and territory in the context of settler-colonialism. In other words, she studies hiking and camping! Her areas of academic interest include space and place theory, the anthropology of colonialism, environmental history, Canadian studies, and the anthropology of tourism.