Rick Hansen’s Man in Motion World Tour: 30 Years Later – A Celebration of Courage, Strength, and the Power of Community 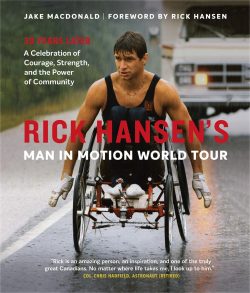 The adventure thrilled the world. A man in a wheelchair leaving a shopping mall in Vancouver to wheel 40,000 kilometres through 34 countries over the next eighteen months. He wanted to prove that people with disabilities had great potential if they pushed hard and long to realize their dreams.

The endeavour did not start well. It was March 1985 and the weather was miserable. His support vehicle got into an accident coming out of the shopping mall parking lot. His trainer and road manager wiped out on his bicycle and was nearly killed. A car that slowed to give the man room was rear-ended. Misreads of the map made the man wheel far further than planned. But the man and his team pushed on to complete the tour and raise $26 million for spinal cord research and support services for people with disabilities in the process.

The man in the wheelchair was Rick Hansen. Coming home from a camping trip to Bella Coola at the age of fifteen, Rick was thrown from the back of a pickup truck and rendered a paraplegic by a broken back. By the time he started the tour, he was 27 and had become one of the most decorated wheelchair athletes in the world.

Jake MacDonald, a journalist and writer based in Winnipeg, has woven a wonderful tapestry of descriptions, memories, tributes, and reflections into a compelling reminder of just how ridiculous Rick Hansen’s dream was and how many people it took to make it a success. As indicated in the book’s title, Hansen had courage and strength, developed over many years and applied in many ways. But there was (and is) more — far more.

The more is caught beautifully in the final words of the book’s title – “the Power of Community.”

We live in a culture dominated by the celebration of what Montreal-based philosopher Charles Taylor calls “expressive individualism.” In that context, the glories of the individual are highlighted. That perspective is expressed by astronaut Chris Hadfield in the front cover quote, “Rick is an amazing person, an inspiration, and one of the truly great Canadians. No matter where life takes me, I look up to him.”

All of this is true and admirable. But I think Hansen himself captures the soul of MacDonald’s account better in a quote at the beginning of the last chapter. “The Tour transformed everyone who was involved with it. By working together for a common goal, we suffered together, supported each other, and became better versions of ourselves” (p. 149).

The book is filled with wonderful stories to back up this perspective.

Family and friends in Williams Lake, in the years immediately following the accident, helped him temper his bitterness and anger with their support and turn it into a deep acceptance of cooperation as the true source of strength, love, and partnership. As Hansen says, “It was about forgetting your ego and joining in, contributing what you could” (p. 16). Throughout his career as a world-class wheelchair athlete, Hansen deepened his appreciation for that truth. MacDonald’s storytelling highlights the team that made Rick successful.

This team approach carried through into the tour. Indeed, it was the thing that made the tour possible. MacDonald chronicles the brilliant adaptability of the team so well. The challenges of the opening day were simply a foretaste of the barriers to come, whether it was Rick’s physical endurance, weather conditions, technical troubles, or the lack of attention the tour got in its early days. All of these and more called out adaptability and creativity from the whole team. And they all knew that whatever courage and strength was being generated by individuals, the whole team had their backs.

MacDonald’s selection of a rich range of photographs adds to the book’s impact. By my rough count, only eight out of the 150 photos show Rick alone. And even then, the photographer and who knows how many other people are just out of sight: another telling tribute to the team on the tour.

A great chapter in the book, “Taking Care of Business,” chronicles the support work that took place in the office in Vancouver, far from the cheering crowds and media. It was filled with volunteers who stuffed envelopes, licked stamps, and answered phones. It morphed into the vast network that is the Rick Hansen Foundation. To date, that power of community has raised over $326 million for people living with and recovering from spinal chord injuries.

I hope you read this book, and it is so worth the read, and so rewarding to follow the golden thread MacDonald has run so eloquently through its pages. Ask yourself the question, “What makes this amazing community, made up of so many different people in so many different circles of influence, gel so well to achieve such inspiring things?” The answer is there for those with the eyes to see.

Brian Fraser is minister with Brentwood Presbyterian Church and a consultant and leadership coach with Jazzthink, a company that uses the wit, wisdom, and workings of jazz to provoke flourishing communities. Brian completed his Ph.D. in history with Ramsay Cook at York University in 1982 and came to B.C. in 1985 to be dean of St. Andrew’s Hall, the Presbyterian college at UBC, and to teach history at Vancouver School of Theology. He has published three academic books, along with academic and popular articles on a wide range of topics related to communal wellbeing. The focus of his historical work is leadership and organizational development in faith-based non-profits. He resides in North Vancouver with his wife, Jill Alexander. Brian also moderates conversations in the SFU Philosophers’ Cafe program.