The Tree Trunk Can Be My Pillow: The Biography of an Outstanding Japanese Canadian

The government of Canada declared war on Japan on December 8, 1941, a day after the Japanese attacks on Hong Kong and Pearl Harbor, and in the early months of 1942 the government took the decision to classify all Japanese-Canadians as enemy aliens. Under the War Measures Act and other legislation, over 22,000 Japanese-Canadians — men, women, and children — were stripped of their property and detained in internment camps in the Interior of B.C. and elsewhere in Canada.

Motivated by wartime fear and hysteria, and by racism of an older vintage, the legislation applied even to the most successful and philanthropic of the Japanese community, and perhaps no one was more prominent than Eikichi Kagetsu, owner of the Deep Bay Logging Company on Vancouver Island and a respected businessman in Vancouver.

In The Tree Trunk Can Be My Pillow, Kagetsu’s son, the late Jack Kagetsu, provides a biography of his boss logger father that reviewer Bob Griffin, historian of the B.C. forest industry, calls “a tale of hardship, adversity overcome, and success — all of them ripped away by world events.” — Ed. 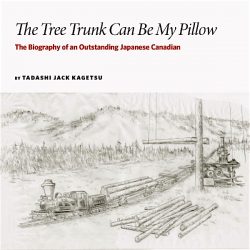 Tadashi Jack Kagetsu (known as Jack) has written a most engaging study of his father, Eikichi Kagetsu (1883-1967), which is also a valuable contribution to the literature on the Japanese Canadian experience.

The Tree Trunk Can Be My Pillow is a wide-ranging study in two parts. Firstly, it is the story of a Japanese businessman who came to British Columbia with almost nothing and managed to create a very successful logging enterprise. Secondly, it is about what happened during and after the Second World War: the removal of  Japanese Canadians from coastal B.C., their internment in the Interior, and their subsequent dispersal across Canada. It is a tale of hardship, adversity overcome, and success — all of them ripped away by world events. Dr. Jordan Stanger-Ross of the Department of History at the University of Victoria has provided an insightful introduction to all these events that should be read before turning to the book.

There is no doubt that Jack Kagetsu, who died in 2006, idolized his father; when reading the volume, one must keep this in mind. But it is a worthy tale nonetheless. Kagetsu outlines his father’s early life in Japan, including a brief description of his involvement in the Russo-Japanese War between 1904 and 1906, when he decided to go to Canada. His tobacco business had been taken over by the government and he heard about the forests with giant trees in Canada. Initially he had to take a variety of jobs in B.C., including at a sand and gravel operation at Sechelt. He subsequently secured a job supplying logs to the sawmill at Britannia Mine.

Having saved his money, Eikichi Kagetsu bought some timber property at Sechelt and with the profits acquired timber at Blind Creek on Cortes Island, but unfortunately that logging operation failed. Meanwhile, Eikichi married, and both he and his wife Toyo (1892-1981) worked hard to support the family and amass enough capital to begin logging again.

In 1915, Eikichi was able to resume logging and never looked back, building a successful logging company that seems to have made considerable profit, mainly from shipping logs and sawn wood to Japan.

Eikichi moved locations several times before finally settling at Fanny Bay (south of Courtenay), where his Deep Bay Logging Company purchased timber property from the E & N Railway and became a major player in the B.C. forest industry, with an extensive operation that included highlead and railway logging. But all did not go smoothly. In 1926, a fire destroyed many workers’ dwellings and all the logging equipment. Eikichi was able to resume operations within three months.

The Tree Trunk Can Be My Pillow is filled with interesting observations, including the introduction of oyster growing to Fanny Bay. Many of Jack’s comments relate to family matters, such as attending the movie theatre in Courtenay, and describing how Japanese traditions were preserved in the family. Jack explores family life in a variety of ways, including the family’s emphasis on education. Issues also arose such as his mother speaking Japanese at home, with the result that Jack did not understand Japanese or English very well.

As well, two of Eikichi’s children, who had gone to Japan to further their education, were stuck there during the Second World War and a son was forced to serve in the Japanese army. Following the war, Eikichi hoped to return to logging. Jack suggests that he did not do so because the E & N Railway had sold the timber that he had expected to log, but this seems unlikely because, earlier, Eikichi had regularly shifted his operations around.

Instead, perhaps he saw the changes coming to the industry in the postwar years: many independent loggers such as himself had gone out of business; new forest regulations were coming into force; and the industry was shifting from railway logging to truck logging.

Eventually Eikichi Kagetsu moved with his family to Toronto, where he tried several relatively unsuccessful businesses. He also continued to support community projects, though much reduced in scale from his time in Vancouver. He died in Toronto in 1967, aged 83.

In addition to his father’s and family’s story, Jack Kagetsu has provided a very useful bibliography to The Tree Trunk Can Be My Pillow. Although not comprehensive, it captures all the basic references and is a good starting point for the study of Japanese Canadian history.

Bob Griffin served as history curator at the Royal BC Museum for more than thirty years, latterly as manager of the Human History division, and wrote many articles on the forest and mining industries. Since his retirement he has co-authored two books for the Royal B.C. Museum: Feeding the Family: 100 Years of Food and Drink in Victoria (with Nancy Oke; RBCM 2011), and Stewards of the People’s Forests: A Short History of the British Columbia Forest Service (with Lorne Hammond; RBCM 2014).