Just Watch Us: RCMP Surveillance of the Women’s Liberation Movement in Cold War Canada
by Christabelle Sethna and Steve Hewitt

Christabelle Sethna of the University of Ottawa and Steve Hewitt of the University of Birmingham, England, trace the work of RCMP spies and informants in gathering “Mountie bounty” — surveillance information gained through watching and recording the protests and private lives of Canadian women’s groups in Cold War Canada, including the influential Vancouver Women’s Caucus.

“Through those events and more,” writes reviewer Larry Hannant, “the RCMP did what it did best – keeping the recording machine running.” — Ed. 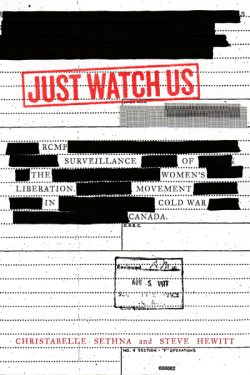 In Canada, the reenergized women’s movement of the 1960s and 1970s got an injection of militance, ironically, from progressive legal reforms. A bid by parliament in 1968-9 to mollify public dissatisfaction with outdated laws governing sexual practices and divorce unexpectedly propelled a generation of younger women into more radical action. The new laws decriminalized homosexuality, allowed abortion under strictly-regulated conditions, made divorce easier to obtain, and decriminalized the sale of contraceptives.

But for the advocates of what came to be called “women’s liberation,” reform was for sellouts. Nothing less than a determined campaign to “smash capitalism” was called for. The rhetoric alone was enough to put them under the intense scrutiny of the RCMP, which until 1984 had the task of monitoring perceived subversion. The resulting surveillance led to the RCMP creating tens of thousands of pages of files on women’s liberation organizations and individuals associated with them. Those records, obtained in regrettably-eviscerated form by the authors using the Access to Information and Privacy Act (ATIP), is the foundation for this illuminating book.

Christabelle Sethna and Steve Hewitt combine exceptional depth of knowledge about the two main issues addressed in Just Watch Us, having written for more than two decades about, respectively, the Canadian women’s movement and state surveillance of this country’s progressive communities. With the exception of their conclusion about the long-term impact of the women’s movement of that era, their comprehensive grasp of the issues is evident throughout the book.

As they point out, women in Vancouver were on the front lines of the movement, participating in two seminal campaigns. Vancouver women had, in Ian Milligan’s rich phrase, joined other New Left groups in “coming off the mountain” in 1969. That involved focusing on activism in the city following the suppression of student radicalism at Burnaby Mountain’s Simon Fraser University.[i]

Within a month of the shift into the city, the RCMP produced a detailed five-page report on the new Vancouver Women’s Caucus (VWC). The force that remained all-male until 1974 continued for years to pile up the documentation on female dissidents.

The authors’ shorthand phrase for the convoluted mindset that stuffed the vacuum beneath the Mounties’ Stetson hats is “the red-tinged prism.” The phrase evokes authorities’ misplaced fears that communists were secretly manipulating the determined feminists of the day. The Mounties also insisted, contrary to objective evidence and the declarations of the activists themselves, that communists were the driving force behind many dissident groups of the 1960s and 1970s, including the youth and student movements and Red Power activism.

Viewing the world through a “red-tinged prism,” the RCMP turned its attention on the VWC and its sister organizations throughout the country. The groups were investigated not because they were women but because of their association with the political left. While communists were not, in fact, influential within the women’s movement, the RCMP correctly identified another leftist inclination — what it labelled “Trotsykist subversion” (p. 87).

The first of the women’s offensives that sprang from Vancouver was what the renowned feminist Judy Rebick has identified as “the first national action” of the Canadian women’s liberation movement, the 1970 Abortion Caravan from Vancouver to Ottawa (p. 76). Scarcely a year after the amendment of the abortion law, the VWC set its sights on one of its most negative residual effects. That was the continued patriarchal and top-down control of abortion exercised by the male-dominated Therapeutic Abortion Committees.

In late 1969, drawing inspiration from the On to Ottawa Trek of unemployed men that set out from Vancouver in the summer of 1935, VWC instigated a plan for a caravan of women to descend on Ottawa to confront the government of Pierre Trudeau. The influence of Trotskyists was evident in the lead vehicle in the caravan, which was adorned with the phrases “On to Ottawa!” “Abortion Is Our Right!” and, most controversially, “Smash Capitalism!” (p. 89). The campaign culminated in an unprecedented sit-in at the public gallery of parliament on 11 May 1970, which surprised and shook both police and parliamentarians.

The second event – far less successful than the Abortion Caravan – was a 1971 visit by an Indochinese women’s delegation to Canada, which opened with a major conference in Vancouver. Titled “In Solidarity With Our Sisters of Indochina, the conference had exactly the opposite effect – ripping apart the notion of global sisterhood. Among the conference attendees were hundreds of women from the U.S. with a host of disparate sexual, political, and social agendas. Their arrogant domination of the proceedings showed that U.S. imperialism was a scourge far beyond Indochina. The emergence of feminist identity politics began to fracture a movement that had imagined itself as a single united front embracing women throughout the world.

Through those events and more, the RCMP did what it did best – keeping the recording machine running. The Mounties also diligently took note of another shift in the early 1970s, as the militants who had pledged to smash capitalism began to scramble to scoop up government funds coming available through Opportunities for Youth and other state programs. In 1971, for instance, as the VWC was disbanding, the RCMP identified Trotskyists as key to an effort to create a women’s centre, staffed by the professed revolutionaries, using funds from the Department of Manpower and Immigration (p. 162).

One of the more thought-provoking sections of Just Watch Us deals with the dilemmas presented to researchers when they receive information that was previously locked up in RCMP files but that now has been, although in highly expurgated forms, made available through ATIP. The extensive, arbitrary, and sometimes-incomprehensible nature of the deletions of information under the act is a common complaint of historical researchers. But in an extended reflection that is unique to the book, Sethna and Hewitt turn from complaining about what was not revealed and write about what was.

One of the perceived examples of what they called the “paradox of the Mountie bounty” (p. 170) relates to inept bureaucratic processing of previously secret files. Although rare, these lapses can in some cases enable researchers to ascertain the names of RCMP sources who were spying on the activists. ATIP stipulates that their identities are to be kept secret forever. The authors are also cautious about revealing their identities. Yet some of the activists who were under surveillance and whose personal information was revealed to the RCMP by those snitches will be inclined to insist that the more names revealed, the better.

Revealing as many details as possible serves a valuable lesson to naïve Canadians about how wide-ranging the state’s surveillance is. In 2008, the singer Rita MacNeil, for example, was “flabbergasted” to learn, as a result of an ATIP request, that she was one of the many people whose efforts to advance the status of women made them targets of the RCMP. “To think that we were being watched – it’s a surprise,” she observed (p. 176). Nothing could more explicitly point to the need for even more comprehensive histories of the RCMP’s intrusive surveillance, complete with the names of innocents like MacNeil. With every such revelation, more of us come to understand that the target of the secret police is all of us. Being innocent does not make you invisible.

The authors cite a third case which calls for careful attention to how to handle formerly secret information, this one compelling. It involves a woman who sought the advice of a friend about how to deal with an unwanted pregnancy. The RCMP’s informant reports in considerable detail about the exchange, including the names of the people and of a women’s liberation group who could provide assistance as well as the price of an abortion.

As the authors point out, the pregnant woman was three times a victim. Once by being targeted by the state because of her association with the women’s liberation group. A second time by the sharing of the private information about her pregnancy. The third, potentially, by the authors themselves revealing the names of the people involved. They decide not to disclose the names and, further still, not to include any reference to the file in which the information was found, so that curious researchers themselves would be unlikely to be able to track down the details (p. 177).

In an unconvincing twist of logic at the close of the book, the authors appear to side with the RCMP’s judgement that the women’s liberation movement was “revolutionary.” They write that “the irony at the centre of this book [is that] a police force charged with serving as a bulwark against radical challenges to the status quo missed the revolutionary implications of a movement that did just that” (p. 206).

As evidence of a revolutionary agenda they cite an observation by the U.S. historian Ruth Rosen that the women’s movement was intent upon “shattering traditional ideas about work, customs, education, sexuality, and the family” (p. 75). The authors don’t pause to consider the extent to which, over the past 50 years, capitalist society has accommodated many of those “revolutionary” demands, even as control of society by a profit-making one percent has been immeasurably tightened.

Certainly what we see today is far less than the “Smash Capitalism” slogan emblazoned on the Volkswagen van that was an integral part of the 1970 Abortion Caravan.

Check out the lengthy list of articles on history of the Vancouver Women’s Caucus — including first-person accounts by activists of the day — at the VWC site, subtitled A Women’s Liberation History Project:  https://www.vancouverwomenscaucus.ca/publications/about-us/

A history professor and an award-winning book author and website contributor, Larry Hannant presents history in a variety of formats. He’s the author or editor of three books, including The Politics of Passion: Norman Bethune’s Writing and Art (1998), which won the Robert S. Kenny Prize in Left/Labour Studies. His forthcoming book is an edited collection titled Bucking Conservatism: Alternative Stories of Alberta in the 1960s and 1970s (2019). The award-winning website Great Unsolved Mysteries in Canadian History includes two sections from him. In addition to non-fiction, he’s published poetry, creative non-fiction, short stories, and articles in a number of magazines and newspapers. He’s an adjunct associate professor in the Department of History at the University of Victoria.