#377 Truth for the Highway of Tears

Obstruction of Justice: The Search for Truth on Canada’s Highway of Tears
by Ray Michalko

For ten years, ex-Mountie Ray Michalko investigated the fate of the missing or murdered women and girls on B.C.’s infamous Highway 16, finding clues and even witnesses to the disappearance of at least 18 women along what is now known as the Highway of Tears. Eventually, the RCMP threatened to charge Michalko with obstruction of justice unless he dropped his unofficial investigation.

According to reviewer Bonnie Reilly Schmidt, also an ex-Mountie, “Michalko is critical of the force’s indifference toward the families, as well as their attempts to stonewall, discredit, and intimidate him during the ten years he was actively investigating the cases.”

Today, Schmidt notes, “not one of the missing and murdered women cases along the infamous highway has been solved.” — Ed. 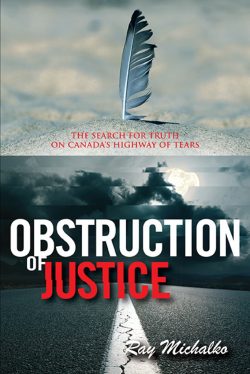 Private investigator Ray Michalko had a recurring nightmare. It began in 2008 after he located a man claiming to be a witness to the 1994 murder of sixteen-year-old Ramona Wilson of Smithers. Michalko took the alleged witness to the RCMP detachment in Smithers to make a statement about his claims, but was shocked when one of the young constables at the front desk asked, “Who is Ramona Wilson?” After further explanations, one of the officers stated that the Highway of Tears investigations had “nothing to do” with the Smithers Detachment. Michalko was told that he would have to contact RCMP investigators in Vancouver if he wanted the man to make a statement. While the constables eventually agreed to conduct an interview, nothing came as a result of the man’s claims and Wilson’s murder remained unsolved. For more than a year, this scene haunted Michalko’s sleep.

Ramona Wilson disappeared from Smithers while hitchhiking along Highway 16, also known as the Highway of Tears, a 724-kilometre stretch of road in northern B.C. that links Prince Rupert with Prince George. During a forty-year period, nine women (eight Aboriginal and one white) went missing or were murdered along it, earning the highway its infamous name. The death and disappearance of these original nine women is the focus of Ray Michalko’s book, Obstruction of Justice: The Search for Truth on Canada’s Highway of Tears. The book reflects Michalko’s admitted obsession with their stories, an obsession that began in 1971 with his interest in the murder of Helen Betty Osborne near The Pas, Manitoba when Michalko was a young RCMP officer stationed in that province. By the time he was working as a private investigator in B.C. in 2005, Michalko was heavily invested in solving the Highway of Tears crimes at his own expense.

This is an important book about justice, race, and gender in Canada, themes that surface throughout the narrative. The book’s relevance has only increased since it was published in 2016, particularly given recent controversies surrounding the National Inquiry into Missing and Murdered Indigenous Women and national conversations about Indigenous rights and the commemoration of Sir John A. McDonald.

The RCMP occupies a prominent place in Obstruction of Justice. Michalko takes the police force to task for their failure to thoroughly investigate the disappearances and murders. Michalko is critical of the force’s indifference toward the families, as well as their attempts to stonewall, discredit, and intimidate him during the ten years he was actively investigating the cases. The pressure from the RCMP only intensified, according to Michalko, when he began to be interviewed by the media, both locally and nationally, as an unofficial expert on the Highway of Tears disappearances. Michalko claimed that these interviews often generated more tips that helped in his search for information, but they also called into question the RCMP’s professionalism. Eventually, the RCMP threatened to charge Michalko with obstruction of justice if he persisted in his investigation.

The RCMP was not trusted by the Aboriginal community in B.C.’s north because of its historical involvement with residential schools and the Sixties Scoop. Michalko found that the victims’ families were also angered and frustrated at how their loved ones were often portrayed by the RCMP, particularly when some were “described as drug addicts and prostitutes who hitchhiked their way to death.” Other victims were characterized as runaways despite the fact that some called home to tell family members of their whereabouts before they went missing.

The racial and gendered assumptions about the missing women prompted the mother of Ramona Wilson to publicly ask, “How would my child’s investigation have been handled had she been blue-eyed and blonde?” Her question was later answered by a provincial government report which concluded that because the victims were often poor, addicted, vulnerable, and aboriginal they did not “receive equal treatment” from the police.

From an investigative standpoint, Michalko uncovered some of the ways the RCMP hindered their own ability to solve the crimes. For example, as early as 1992 the police force failed to use a new computer system that linked information about the missing women with the systems of other police agencies (their names were not entered until 2006). The RCMP also failed to provide the financial and human resources necessary to investigate a growing list of missing women. For those that were investigated, they failed to interview a number of witnesses who came forward including family members and the last people to see some of the women alive. They also showed a lack of interest in reviewing and following up on messages left on a tipster hotline.

And the centralization of the investigation away from the North to the Vancouver area removed investigators, who were anxiously seeking resolution to the crimes and closure for the families, from the local communities. Michalko argues that it was the media and journalists from northern BC who kept the missing and murdered women cases before the public for years, a contention supported by his numerous footnotes.

Michalko spends the better part of the first half of Obstruction of Justice providing context. He describes his own background and interest in solving the crimes, general information about the towns and geography surrounding Highway 16, and the areas where some of the bodies were found. Chapter 3, “Lost Souls,” names each of the victims and the specifics of their disappearances, a moving approach that humanizes the women. It is not until the middle of the book that Michalko begins to discuss in detail his own involvement and what he uncovers. He came to believe that the missing and murdered women were the victims of a single serial killer. Although he identified one suspect who he later discounted, Michalko stood by his theory based on the location of three of the bodies and other circumstantial evidence. He cites the work of a criminal profiler to explain the time lapse between the earlier and later disappearances, noting that serial killers often have a “cooling off” period before they murder again. Despite this possibility, he was never able to prove his theory. By contrast, the RCMP suggested to journalists that they suspected there were three serial killers at work in B.C. at the same time.

Michalko’s interviews with family members and friends remind us that the women were, and are, loved and missed. Greater detail about Michalko’s relationship with the victims’ families would have been insightful for readers, especially given Michalko’s claims that they came to trust him. On the other hand, there is a balance between exploitation and respecting the privacy of the families, and it is obvious that Michalko works hard to achieve this balance in the narrative.

The search for truth along the Highway of Tears remains elusive. At the time Michalko published Obstruction of Justice, more than forty studies of missing and murdered Aboriginal women across Canada, including those along Highway 16, had been completed. Provincially, a number of studies and reports had also been conducted and a commission of enquiry convened. Michalko maintains that all yielded few practical or workable solutions. Today, not one of the missing and murdered women cases along the infamous highway has been solved.

Sadly, Ray Michalko passed away in 2017 before realizing his dream that all of “the sadness and feelings of helplessness the victims’ families have endured for years will one day be relieved with some sense of closure.” Indeed, he dedicates the book to the victims and their families, an indication of his compassion for them. It is highly likely that they miss his investigative efforts and advocacy on their behalf.

Ray Michalko leaves behind an account that should encourage all of us to continue to seek justice for the victims who once travelled along the Highway of Tears.

Bonnie Reilly Schmidt worked as a police officer with the RCMP between 1977 and 1987. She returned to post-secondary education later in life, earning a BA from the University of the Fraser Valley (UFV), a Master’s from Simon Fraser University (SFU), and a Ph.D. in Canadian History in 2014, also from SFU. As a Social Sciences and Humanities Research Council of Canada scholar, Bonnie was also the recipient of the prestigious Dean of Graduate Studies Convocation Medal for Academic Excellence from SFU for her Ph.D. dissertation “Women in Red Serge: Female Police Bodies and the Disruption to the Image of the RCMP.” In 2014, she was also voted one of UFV’s Top 40 Alumni. Bonnie has spoken at a number of academic conferences and has given numerous media interviews about women in the RCMP for Maclean’s, The Vancouver Sun, the Canadian Press, and Global TV (Vancouver). Her first book is Silenced: The Untold Story of the Fight for Equality in the RCMP (Caitlin Press, 2015). Recently, Bonnie retired as a Director for NightShift, a non-profit organization that feeds the homeless and those struggling with mental illness and addictions in Surrey. She is passionate about social justice and human rights issues and is a strong advocate for the rights of women in law enforcement. She has written a number of book reviews for The Ormsby Review.