In 1939 and 1940, some 6,000 British children, known as child evacuees and British guest children, were sent to Canada to escape the threat of German invasion. The practice was stopped in September 1940 with the sinking of SS City of Benares by a U-Boat and the loss of 77 children. In Up in Arms, Amanda Spottiswoode recounts the adventures of six child evacuees on Vancouver Island. — Ed. 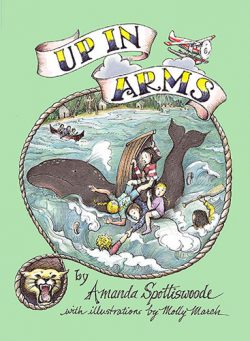 Amanda Spottiswoode’s Up In Arms follows the fortunes of the MacTavish and Phillips children who are sent to Vancouver Island on their own to escape the dangers facing Britain and Europe during the Second World War.

We follow the adventures of Sophie, Molly, Mark, Harriet, Leticia, and Posy as they journey across the Atlantic, across Canada, and settle into their new lives. The first half of the book feels more “tell” than “show,” with a lot of ground being covered through exposition rather than action.

The second half of the story warms up nicely, especially once the children leave Victoria and commence their exploits on the west coast of Vancouver Island, first with an encounter with the legendary Cougar Annie and then with a group of First Nations children who come to their aid.

Kudos to the author for weaving references to Indigenous history and the impact of colonial policies, such as the potlatch ban and the confiscation of Indigenous regalia, into the story.

Having our parentless evacuee children learn about this part of Canada’s past is an effective means of exploring our darker history through fresh eyes and an adroit way of exposing today’s Canadian children to these difficult subjects.

Following our characters’ adventures is also a reminder that children who were evacuated to Canada during the Second World War had to find their feet, learn new skills, connect with new elders and mentors, and adapt to new environments with unfamiliar situations.

Experiencing through the eyes of children an alien culture, replete with eccentric coastal characters, provides an engaging backdrop to Spottiswoode’s adventures. Given that the book is set in the 1940s, inevitably there are some gender stereotypes; but embedding the children into their new surroundings has allowed the author to stretch the boundaries of some of the characters without compromising their credibility or the sense of period.

For example Molly, the eldest of our heroines, becomes an accomplished pilot, and her flying prowess subsequently forms a crucial part of the plot.

It is always difficult for an adult to review a children’s book objectively because they are not the intended audience. Up In Arms reminded me a little of the Enid Blyton stories of my own childhood, where children – temporarily free of parental guidance — banded together to have a rip-roaring adventure coupled with a dose of morality and important life lessons learned. Spottiswoode’s venture is none the worse for that comparison.

Up In Arms is the latest in a series involving these same plucky young adventurers from the MacTavish and Phillips families.

Children — and parents — who enjoyed Spottiswoode’s previous stories, and those who are discovering them for the first time, will find much to enjoy here.

Steve Pocock is a researcher with Hansard Services at the Legislative Assembly of British Columbia. A graduate of St Andrews University in Scotland, he and his wife immigrated to Canada in 2008 from North Yorkshire, where they lived for many years. Steve enjoys travel and languages and has a keen interest in the history of British Columbia. He has also been known to enjoy the craft beers that occur in such wonderful abundance in the province.