The Cure for Death by Lightning: A Play Adapted from the Novel by Gail Anderson-Dargatz
by Daryl Cloran

Talker’s Town and The Girl who Swam Forever: Two Plays
by Nelson Gray and Marie Clements 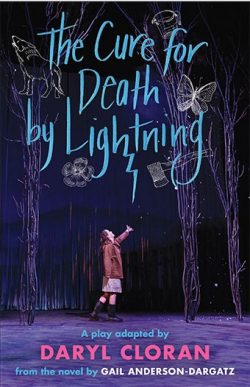 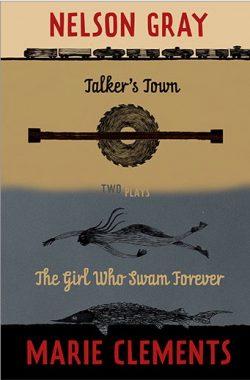 Plays are written primarily to be staged, rather than read, and published scripts are more likely to be found in classrooms and libraries than on the desks of the average reader. However, with their rendering of British Columbia’s landscape and history — and their reminder that the past lingers on — these plays prove satisfying, rewarding reads, either in conjunction with a production or independently.

United by a general time frame (the mid 20th century) and a setting (rural B.C.) the three also share a focus on animals as vehicles to evoke spirituality and mystery. Finally, each is a coming-of-age story that scrutinizes Indigenous-settler interactions, so the reading experience is also challenging.

The Cure for Death by Lightning is an adaptation of Gail Anderson-Dargatz’s 1996 novel of the same name, which became a bestseller and award-winner in both Canada and the U.K. Cloran largely adheres to Anderson-Dargatz’s plot. The play opens with John, Mother (who is never named), and fifteen-year-old Beth Weeks, while tenting on the Adams Plateau, defending themselves and their bleating sheep from a grizzly.

First daughter and then father fire at the bear, and when John emerges from the bush in his attempt to kill it, he is wild-eyed and forever changed. As Beth narrates, the ensuing events unfold from “The year I turned fifteen, the year the world fell apart and began to come together again” (p. 10).

The family returns to their farmhouse in a Turtle Valley plagued with fire, suicide, inexplicable deaths, and seemingly possessed animals and humans. John becomes increasingly deranged, combative, and tyrannical, and repeatedly subjects Beth to physical and sexual abuse. When he takes a shotgun to a neighbour whom he blames for his woes, he is apprehended by the authorities and temporarily removed from the community. Mother barely manages to keep the place together, coping through denial, communing with her dead mother, and keeping distant from Beth.

Meanwhile, Beth’s complicated relationships with the two Indigenous hired hands, cousins Dennis and Filthy Billy, and their Indigenous /settler cousin Nora add to the tumult of her initiation into adulthood. All three have been damaged by intergenerational trauma, and Dennis, who copes by drinking, and Nora, who, as the descendant of residential school survivors and “not a real Indian anyway,” retreats from society, provide potential companionship and romantic partnerships for Beth. However, they eventually elect to escape to the city. Filthy Billy, who displays symptoms of Tourette’s Syndrome, is the one shining light in Beth’s life. He is steadfastly loyal to her, helps her make sense of things through storytelling, and is a counterbalance to her otherwise troubling home life.

When John returns to the farm, he seems little changed. What has changed is Beth’s attitude; empowered by the support of Filthy Billy, a belief in the curing power of storytelling, and at least a sign of her mother’s love, Beth takes matters into her own hands. She puts her father in his place and directs her mother to face the family’s problems. The play ends with the quartet travelling to nearby Blood Road, which is blanketed with turtles that Billy and Beth help up the embankment where they will lay their eggs. Action replaces paralysis; cooperation with nature replaces fear of it.

The dark tone of The Cure for Death by Lightning is tempered by the occasionally humorous and touching relationships between Beth and her peers and by the Magic Realism, the latter conveyed most strikingly by animal puppets that layer a spiritual element onto the realist template. In a production note, Cloran credits the puppets with creating the “magic of the show”  (p. 4). Having seen the play (under Cloran’s direction) at Western Canada Theatre in Kamloops in 2017, I can attest that the vivid visual descriptions transfer successfully to the stage.

Cloran’s preface identifies the core of the play: “the relationship between Canada’s settlers and Indigenous people and our shared connection to the land — all seen from the unique perspective of a fifteen year-old girl” (p. x).

Nelson Gray, in his introduction to Talker’s Town and The Girl Who Swam Forever, makes a similar statement, but with an important difference: he sees his work as a settler, and that of Clements, who is Métis, as together “enacting … a cross-cultural dialogue.” Gray acknowledges that, even after he consulted written accounts by Katzie elders and developed face-to-face relationships with several members of the Katzie nation, his attempts to create a female Katzie character for Talker’s Town were futile. After consulting with Clements, he saw the solution: to commission her to write a play about the same events as those in Talker’s Town.

Loosely based on Nelson Gray’s experiences in the 1960s as a fifteen-year-old in a rough Fraser Valley mill town, “where the men all smelled like sawdust and the women washed it out” (p. 7), Talker’s Town is a memory play in part about the unreliability of memory — and a great deal about the viciousness of racism and the lasting repercussions of colonialism. The narrator/Talker recounts being on the fringes of a tough group of boys in the superstitious town. He is not fully accepted because he was a talker rather than a doer.

The play’s point of attack occurs when a pregnant Indigenous teen, Roberta-Bob, with whom Talker had a poignant Platonic night-time encounter at the wharf, disappears from the Catholic school and the town. Piecing together the past events, Talker recalls reporting to police that he had heard her wailing inside the house of Leroux (a slightly older tough guy) but receiving no follow up report. He also recalls the girl’s brother, Raymond-Bob, seeking revenge for her disappearance.

As memories spill out, Talker believes his close friend, Harding, impregnated Roberta-Bob and was complicit in her demise. In a powerful, disturbing denouement, Talker, like Beth in Cloran’s play, achieves adulthood by taking action — action that is disturbing, ambiguous, and complete with spirits and sacrifices. Although this ending is a purging and a personal cleaning for Talker, it is also, ultimately, a scathing indictment of the ethos of the town and, by extension, of the project of colonialism.

As is patent in both the preface and the play itself, the actual events on which Talker’s Town is based are difficult — difficult for Gray to both recall and to process into a fiction that, in turn, is not pleasant for the reader to process. However, confronting the horrors of racism is a necessary step to eradicating them.

Marie Clements takes as a starting point oral history from Katzie elder Old Pierre. The daughter in the first human family to live on Pitt Lake swims on the lake and is transformed into a sturgeon. She is the original fish on the lake and the mother of all sturgeon. Her brother, grief stricken at losing his sister, is transformed by their father into “an owl-like bird that can only be seen by the Katzie descendants” (p. 92). Only humans can take a sturgeon’s life, and only after they seek the power to do so from the brother.

Clements interweaves this story with a version of the more contemporary one in Talker’s Town. The setting is both above (“reality”) and below (“dream”) water, and both the 1960s and the beginning of creation. The Old One acts as a narrator/chorus/ guide to the reader, introducing the story by revealing the play’s structure, gradually telling Old Pierre’s story, and eventually being revealed as the original sturgeon.

In the 1960s story, Forever, a pregnant and orphaned residential school student, has the spirits of her grandmother and the Old One to guide her. Forever escapes from the residential school, revealing her situation through dialogue with her brother Ray (Brother Big Eyes) and with the white boy, Jim, the baby’s father.

In her dream, Forever is transformed into a sturgeon and Brother Big Eyes into a bird. In waking life, her brother temporarily abandons her, leaving her grandmother’s spirit as her only companion; however, he returns to her by the end. Eventually, the two stories merge: Forever has decided to keep the baby, which is born from the carcass of a sturgeon.

The richness and breadth of The Girl Who Swam Forever is typical of Clements’ style. In works such as The Unnatural and Accidental Women (2000) and The Edward Curtis Project (2010), for example, she masterfully conjoins different worlds, erasing barriers of time and place and producing works that are at once strong condemnations of the project of colonization and jaw-droppingly beautiful affirmations of the resilience of Indigenous cultures.

Ginny Ratsoy is an Associate Professor of English at Thompson Rivers University specializing in Canadian literature. Recent courses have included Modern Canadian Drama and The Environment in Canadian Literature. Among her publications are Playing the Pacific Province (co-edited with James Hoffman) and Theatre in British Columbia. Her latest academic publication is about a wonderful third-age learning organization, The Kamloops Adult Learners Society, and is published in No Straight Lines: Local Leadership and the Path from Government to Government in Small Cities, edited by Terry Kading and published by University of Calgary Press.