Art of Freedom: The Life and Climbs of Voytek Kurtyka
by Bernadette McDonald 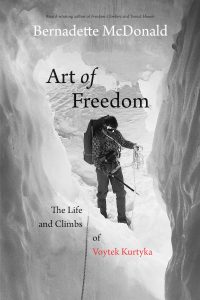 Born in Biggar, Saskatchewan, in 1951, Bernadette McDonald now divides her time between Naramata, B.C., and Banff, Alberta. She is author of three award-winning books with Rocky Mountain Books: Freedom Climbers (2011), Keeper of the Mountains (2012), and Alpine Warriors (2015).

Reviewer Ron Dart praises McDonald’s well-crafted biography of Kurtyka for opening a door into the “mountaineering lore and legend” of this accomplished Polish mountaineer. – Ed.

Voytek Kurtyka remains one of the greatest alpinists of all time.

There is a tendency when telling the tale of mountaineering to focus excessively on those from Western Europe or North America. This is an understandable prejudice given the fact many of the climbers who did first ascents emerged from in those places, but such an approach ignores equally important climbers from Eastern Europe and other parts of the world.

Bernadette McDonald has a proven record of writing biographies and histories of climbing individuals and the global mountaineering clan from a variety of personal and national perspectives. Indeed, in the last decade she has emerged as one of the most acclaimed tellers in the mountaineering genre. With the publication of Art of Freedom: The Life and Climbs of Voytek Kurtyka, McDonald and her more reclusive subject, Voytek Kurtyka, come together to entrance the reader with a mountaineering drama well worth telling.

The larger story about Polish mountaineering needed to be told, and Kurtyka was central to this. McDonald, to her literary credit, tracked and traced Kurtyka’s familial, literary, and mountaineering journey from his earliest years to the the seasons and phases of his most demanding climbs.

Kurtyka is known for the first ascent in alpine style of Akher Chogh in Hindu Kush (Afghanistan) (1972); the first winter ascent of Trollveggen (“troll wall”) in Norway (1973); and for his climb (with Austrian climber Robert Schauer) of the west face (Shining Wall) of Gasherbrum IV in Pakistan (1985). In 2016, he received the coveted Lifetime Achievement Award of the Piolet d’Or Carrière (“Golden Ice Axe”).

Kurtyka was kind and generous enough to disclose more of his journey to McDonald than his fans expected, and McDonald unearths and reveals much about Kurtyka’s subtle and nuanced inner journey as well as rich details of his demanding and challenging climbs on a variety of terrain.

The sixteen chapters that form the substance of the book are bookended by a suggestive Introduction, Epilogue, and Chronology of Selected Climbs. The many photos (colour and B&W) speak their language of drama and perseverance and offer the reader a gripping visual companion to the written text.

The title, Art of Freedom, speaks much. Freedom is an art form that calls forth skill, endurance, and creativity. Mountaineering is not for the faint of heart or weak of limb. A professional engineer, Kurtyka struggled to be free of many worldly pressures to devote himself to what gave life and significant meaning to his soul and body. The details of his animated pilgrimage are unfolded well and wisely by McDonald.

Kurtyka was born in 1947, hence the most demanding of his climbing years are behind him. But he leaves in McDonald’s well-crafted biography challenges and memories that are now part of mountaineering lore and legend. The many relationships formed and forged on rock hard mountains (some lasting, some tragically ending) are ably recounted here.

For those who are keen to fill in their knowledge of mountaineering history, interested in Polish and Western mountaineering, drawn to the impressive exploits of Voytek Kurtyka, or fascinated by the interplay of art and freedom, Art of Freedom: The Life and Climbs of Voytak Kurtyka is a must read. This book reveals both Kurtyka and McDonald at their incisive and insightful best.