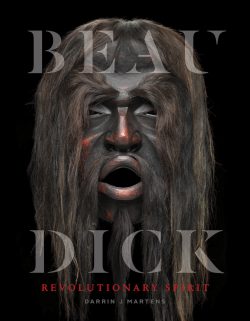 Chief Beau Dick (Walas Gwa’yam) (1955-2017) was a much-honoured artist and activist in the Kwakwaka’wakw community, the wider Indigenous and non-Indigenous arts community of British Columbia, and the academy. His passing at the too young age of 61 has been mourned by members from all these spheres.

Born in Alert Bay and raised in the small community of Kingcome, and then in Vancouver, Dick worked with his father, Ben Dick, and later studied under senior artists Doug Cranmer and Henry Hunt. His work was first collected by major B.C. museums in the 1970s and 1980s, when he was in his twenties. From the start of his career he was recognized as having a talent to carve in many tribal styles, not just in the style of his own Kwakwaka’wakw tradition. Beau Dick’s work is in many private and institutional collections including the Canadian Museum of History, the Royal BC Museum, the UBC Museum of Anthropology, the Vancouver Art Gallery, the Heard Museum (Phoenix), and the Burke Museum (Seattle).

Dick was awarded a 2011 VIVA Award, presented annually by the Jack and Doris Shadbolt Foundation for the Visual Arts in recognition of B.C. artists who demonstrate exceptional creative ability and commitment. In 2013 he was appointed as the Artist in Residence at the UBC Department of Art History. Initially the residency was for a three-month term but ended up being extended to six years in recognition of the great value of the supportive mentorship he generously gave to the many students he met and worked with.

Like many Kwakwaka’wakw artists, Dick produced work that was used in the continuing dramatic ceremonial life of his people’s communities. However, Dick then chose to apply his knowledge of Kwakwaka’wakw cultural traditions out into the world of politics and social advocacy. In 2013, supported by his family, community, and the Idle No More movement, he initiated a trek from Quatsino on northern Vancouver Island to the Legislature in Victoria.

He and his companions ceremonially broke a copper, an act fraught with traditional meaning and an expression of anguish to shame the government of B.C. for its inaction in addressing longstanding Indigenous and environmental grievances and injustices.

Again, in 2014 Haida leader Guujaaw (Gary Edenshaw) and Beau Dick led a group of protesters across Canada to Ottawa, where they broke Haida and Kwakwaka’wakw coppers to draw attention to the Harper government’s broken relations with Indigenous peoples. This activism is recorded in the 2018 documentary movie Maker of Monsters: The Extraordinary Life of Beau Dick, written and directed by Natalie Boll and LaTiesha Fazakas.

In addition to the colour photographs of objects and stills of the artist, exhibit curator and book editor Darrin Martens discusses Dick’s work and career in a 13-page essay divided into headings “The Man,” “The Mentor,” “The Activist,” “The Artist,” and “The Legacy.”

Martens emphasizes the differences between Dick’s work produced for the art market and for potlatches. “Each piece is carefully considered,” he writes, “meticulously executed and presented for maximum effect, [which is] a very different approach from that used in his work for potlatch ceremonies.”

And it was here that I wanted a bit more curatorial input. Martens introduces Dick’s appealing phrase “potlatch perfect” to describe his pieces intended for use in the potlatch. Martens explains that this was “not meant as a term of derision or an insult; rather, it references a series of works (often masks that are not market ready) created for use within a potlatch celebration.” However, none of the objects illustrated in Beau Dick: Revolutionary Spirit are identified as having been made specifically for potlatch use, so the reader cannot see the differences that Martens references.

Martens balances these two aspects of Beau Dick’s oeuvre, items for potlatch use and for sale, stating that while he mentored others to recognize that creating work for the market is both meaningful and a way “to create new work, feed one’s family, and help the Community, … [Dick’s] proficiency in creating unique and distinctive objects and donating them to potlatches is unmatched.”

Nor does Martens discuss the attraction that both museums and collectors have in obtaining pieces that were in fact used in potlatches and thus carry the cachet of “authenticity.”

The book’s other textual piece is a Letter to Beau Dick written by Tahltan Nation writer and academic Peter Morin some time after the artist passed away. Morin then burned the letter, but it is reproduced here in its original seven-page hand-printed form. In it, Morin discusses the role of the Indigenous artist and how Beau Dick was, and remains, so important to the practice of west coast art.

An unusual and poignant touch is the inclusion of a poem about the artist written by his daughter Linnea Dick, who also contributed as co-curator of the exhibition that the book memorializes.

If you are unfamiliar with Beau Dick’s work or simply want a record of it, Beau Dick: Revolutionary Spirit will serve you well.

Alan Hoover worked for 33 years at the Royal British Columbia Museum as a curator and manager. He contributed to The Legacy: Tradition and Innovation in Northwest Coast Indian Art (Royal BC Museum, 1980); edited the anthology Nuu-chah-nulth Voices, Histories, Objects & Journeys (Royal BC Museum, 2000) and recently published (2018) an historical account of Indigenous canoe racing in Northwest Washington State and Southwest British Columbia.