The World’s Most Travelled Man: A Twenty-Three Year Odyssey to and through Every Country on the Planet
by Mike Spencer Bown 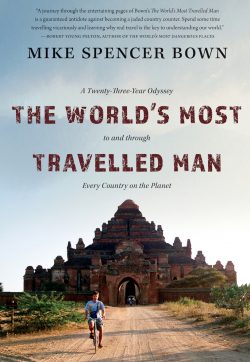 During 1,000 weeks, Mike Spencer Bown backpacked around the world between 1990 and 2013, visiting far more countries than most people can name.

He travelled light, using the same backpack for 23 years. Perhaps more remarkably, he always went without a camera, relying on people he met to take photos, which they sent to him.

In a 2013 interview with the Irish newspaper The Southern Star, Spencer Bown recalled that travel books by Richard Francis Burton and Henry Morton Stanley “provided him with the initial inspiration to travel.” But if had to pinpoit the the moment when the impetus to travel the globe crystalized for him, it happened when he was sitting on the side of a mountain in British Columbia.

I was looking out over a valley and was mesmerised by its blue haze and was thinking how strange and beautiful it looked. I thought I would like to go and see all the natural environments and how people lived in them because there are such big differences, even across Canada.[1]

After meeting thousands of people, as he wrote in The Globe and Mail in October of 2017:

Good people greatly outnumber nasty people worldwide. There is a network that existed long before social media: the network of persons of good will, who will introduce and pass you to other persons of good will, such that you can take a friendly look around a town, a nation, or the world, as you like. There is no similar network among nasty people. They are on their own, and if you know what is good for you, you will leave them alone.[2]– Ed.

Mike Spencer Bown, born in Calgary in 1969, spent the better part of 23 years travelling to every country in the world. I didn’t do a careful count but I’m pretty sure that every one of those 190+ countries is mentioned somewhere in his remarkable book.

In the process of criss-crossing the globe, Spencer Bown saw some of the world’s most exquisite landscapes and undertook the most remarkable travel experiences our planet can offer. He describes these with much economy, making it clear that we need to go and see them for ourselves. But his book is rich in advice about how to do just that.

As Spencer Bown explains, The World’s Most Travelled Man is a tale about how to maximize our travel and have the most fun possible in the process, while on a modest budget. This involves, among other things, discount air travel and even judicious bribing of local officials to expedite otherwise time consuming and annoying waits for visas.

I enjoyed the book most where Spencer Bown dwells on local colour, recounting those moments when he met people and discussed their lives, hopes, and challenges. His tales of travel through Central Asia, much of which he did with a Kazakh woman friend, are among the most entertaining.

[I must admit, however, that I’ve been spoiled recently by the global travel narrative of another western Canadian writer, Andrew Struthers, whose Around the World on Minimum Wage (New Star, 2014) hooked me with its manic stream of the sublime, the sublimely ridiculous, and much that lies strewn somewhere between the two. Struthers is a hard act to follow.]

Spencer Bown also offers fascinating glimpses into the troubled Horn of Africa, where he became something of a local celebrity. Perhaps the most memorable is his time spent deep in the backwoods of the Congo with the Bambuti, a group of pygmies. These are people who, we are told — if they live to be thirty — have “more fun than an office worker who drags his living carcass around for three score and ten” (pp. 252-53).

This pygmy interlude becomes fraught with danger after alcohol fuelled the kind of conflict that can arise from cultural differences and competition for women. The crisis was neatly resolved however, by lighting up a bit of mellow Bambuti bud.

The Congo adventure is one of several places where we are offered insights into Spencer Bown’s unique sensory capacities. These have been honed, he tells us, by long periods of solitude in the Canadian wilderness. Life alone in the wilds of western Canada has resulted in him being able virtually to read the minds of others, discerning who is truly a friend or foe, who’s dangerous and who’s not. This helps immeasurably when it comes to navigating tricky situations abroad, particularly when one might feel tempted to get involved in local difficulties, which Spencer Bown steadfastly eschews.

This sort of spidey sense cultivated in the “fourth world” (as he calls our local wilderness) proved remarkably effective in helping him wend his frugal way through countries and situations where he otherwise had only the most superficial understanding of local conditions and personalities.

I felt a bit motion sick at times from all the movement in rapid succession, from Central America to South East Asia to the Balkans, from Central Asia to the Amazon basin, back to Asia again and on to central Africa. I suppose this is inevitable in a tale covering nearly 200 countries in less than 400 pages, but it might be disorienting for the more obtuse among us.

There is a chapter, for example, entitled “The Forest Primeval.” While the title suggests Central Africa, the posted itinerary starts in Morocco and the actual discussion begins in the Belarussian capital of Minsk. The World’s Most Travelled Man contains many such geographically-extended examples that might result from a need to include each of the 195 countries somewhere in the narrative.

I couldn’t help wondering if organising the book more rigorously according to geography might have helped overcome my occasional travel sickness. But that might have required more careful introductions and a clearer framing of each region, which is not Spencer Bown’s style. Rather, The World’s Most Travelled Man is a kind of Hakluyt’s Voyages for the Facebook age, describing the details of how one might travel if one wanted to go everywhere in the known world on an extended voyage recounted by the same seasoned, loquacious traveller.[3]

The reader is offered tips not just on how to get to and through these places, but also how to do so without losing sleep. Passing through Rwanda, our traveller was briefly daunted by thoughts of genocide in that place, once again a “peaceful green land.” He reassured himself by remembering that it all happened long ago, in 1994, “back when the colours of my backpack were still bright and all the zippers worked” (p. 238). A similar close brush with disorienting local reality came when Spencer Bown was offloaded from a Guatemalan bus, early in his travelling days, by soldiers inclined to “disappear” those passengers they suspected of supporting an insurgency. Once again, the solution was easy because the author was a foreign tourist, free to continue untroubled on to a pretty lake town. 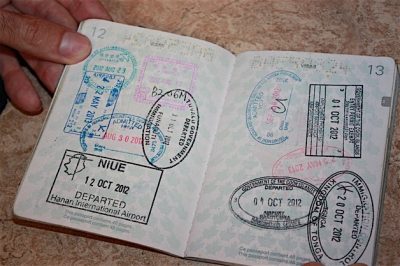 Similarly, by the time Spencer Bown reached Nepal’s capital of Kathmandu, in the midst of that country’s communist uprising, he was fully able to enjoy the hash-fuelled partying of fellow backpackers, undisturbed by the “encroaching army of rebels” (p. 133) who were so clearly someone else’s problem. While this attitude may sometimes strike the reader as trivialising or being a spectator to the trauma of others, Spencer Bown makes it clear that we must cultivate this kind of tough mindedness if we want to ensure that our travel remains fun — picking up girls, drinking beer, swimming, riding dune buggies, and so on — over the long haul.

His crucible in the western Canadian woods and mountains has combined with Spencer Bown’s subsequent odyssey to make him a veritable font of wisdom about the places and people he encountered, as well as how to travel smart. Sweeping and worldly aphorisms and travel advice come naturally. Rio de Janeiro is “a violent city, which is disturbing if you are not born there.…” (p. 214). “[W]ith backpacking, each continent requires unique ways and means. European travel is very strange compared to that in the Middle East (p. 114). “[T]he DRC (the Democratic Republic of Congo) was not ready for mass tourism yet [there had been a particularly gruesome murder there]” (p. 269). “Just as in Tunisia, the economy [of oil rich Libya] seems to be based on street vendors selling one another sunglasses and dresses, coffee, fruit juice, and shawarma…” (p. 336) “It is always a good sign for the stability of a region if you see Western women” (p. 262). And so on.

At least as precious are the author’s insights and cautions about bigger questions, like the environment, the UN, and other hapless and bumbling international “do-gooders.” “It’s a good thing that as cultures modernize, they invest in other ways to gain prestige, including cars, vacations, motorboats, and big houses, because there are few deeds more damaging to the environment than having loads of kids” (p. 274).

The Kafkaesque process of getting a Sudanese visa illustrated “the pernicious bureaucratic mess that keeps the third world just so” (p. 280). “Human rights campaigners have made a fetish of this line called the border, and all sorts of legal rights for the person who steps over it.” Feckless attempts to help refugees, Spencer Bown reminds us, have complicated the lives of innocent backpackers.

The author’s growing travel expertise and wisdom did not go unnoticed. Less than half way through the book we learn that, on at least a dozen occasions, Spencer Bown joined travellers’ discussions only to learn they were “discussing various tales about me and my travel exploits” (p. 162). As he neared the end of his travels, Spencer Bown had become a celebrity traveller, a kind of Paris Hilton of the hostel trail known not only at home in Canada but in many other countries, from Somalia to Ireland.

As this book so carefully documents, Spencer Bown’s renown as the king of backpackers was hard earned and well deserved. By the time he got to Dublin, Ireland, late in 2013, Ray the Talk Show Host (Ray D’Arcy) declared the author “the most interesting guy he’d ever met” (p. 358).

Howard Macdonald Stewart’s Views of the Salish Sea: One Hundred and Fifty Years of Change around the Strait of Georgia (Harbour Publishing, 2017) appeared on the BC Bestsellers list and was longlisted for the George Ryga Award for Social Awareness. It was then awarded Third Prize in the British Columbia Historical Federation’s Competition for the Lieutenant-Governor’s Medal for Historical Writing. An historical geographer and semi-retired international consultant whose work has taken him to more than seventy countries since the 1970s, Howard has reviewed books for The Ormsby Review and BC Studies. His 17,000-word story of a 1973 bicycle trip down the Danube with the war hero and debonair cyclist Cornelius Burke was published by The Ormsby Review (September 28, 2016), and he is now writing an insider’s view of his four decades on the road, notionally titled Around the World on Someone Else’s Dime: Confessions of an International Worker. He has lived on Denman Island, off and on, for more than thirty years.