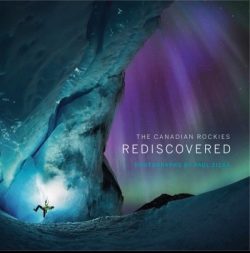 “It really was a treat to pore over this,” Sanseverino said in an email to The Ormsby Review. “The publisher spared no expense in producing this one. I’ve seldom seen such high production quality in a mountain photography book.” – Ed.

Most, if not all, of the images in The Canadian Rockies: Rediscovered embody the Adams credo. Paul Zizka’s images are great photographs.

Certainly this coffee-table book of lavish landscape photography covers all the Canadian Rocky Mountain icons in Alberta and British Columbia: Yoho, Banff, Kootenay, Jasper, Kananaskis, Mt. Assiniboine, Mt. Robson, and a few places in between. The images are technically flawless — one expects no less with a mountain photographer of Zizka’s skill and experience. But what catches the eye and heart of the reader is the deep sense of place he gifts us with in this collection of over 200 images.

Dave Brosha, himself an accomplished adventure photographer, provides the foreword to The Canadian Rockies: Rediscovered. He prepares the reader for what is to come by asking, “Is it possible to make an image that’s truly unique in a place that each and every day has so many presses of the shutter that it’s landscape photography’s version of the paparazzi?”

As if in answer, Zizka follows with a brief introduction to his creative process, noting how some of the pros, and many of the cons, around social media caused him to re-evaluate how and why he makes images. He brings the reader deeper into his process. For me, the highlights are the importance of the human element in his mountain landscapes and the key steps in how he pre-visualizes an image. He reflects on how changes in his motivation and practice led him to rediscover the art of landscape photography.

The next section unleashes a river of imagery. Page after page of unique and stunning images, each imbued with Zizka’s deep sense of place in the Canadian Rocky Mountains, cascade over the reader. Every photo sits alone on a large format page with nothing more than a delicately greyed title and location to distract us from interacting with the print.

Bravo to Zizka and his publisher, Rocky Mountain Books, for allowing each and every image to speak. And speak they do. Many striking images introduce readers to off-the-beaten track locations in the Canadian Rockies. Others images “rediscover” classic shots that have probably been captured in thousands of frames. For these, Zizka uses an insightful knowledge of the area and a willingness to visit at different times of the day or year to make images that give us a deeper understanding of spaces we thought we knew.

Consider, for example, November Freeze (p. 232), a different take on a classic view of the north end of Crowfoot Mountain as it rises majestically over Bow Lake in Banff National Park. The location is reached without too much difficulty from Highway 93, the Icefields Parkway between Banff and Jasper.

In summer, when this shot is usually taken, the shoreline is a hubbub of activity and even on a cloudy day the lake glows turquoise blue. But capturing it in the early winter light, from a low angle that features shore ice and crystal-clear water, gives a completely different feel to this well-known location: somehow a more austere, almost secret view — a view of the familiar before winter locks it away.

The Canadian Rockies: Rediscovered also brings us to many areas not so easily reached. In several images Zizka, an accomplished mountaineer in his own right, takes us to B.C.’s Mt. Robson Provincial Park.

Perhaps some of the most compelling and exciting images in the book are from his successful attempt on Mt. Robson itself. At 3,954 m (12,972 ft), it is the tallest mountain in the Canadian Rockies. Robson is truly a jewel in the Canadian cordillera — but it is not an easy height to gain. There are no non-technical routes on this mountain.

That Paul Zizka was able to summit, pre-visualize, and make images along the way is a testament both to his photographic and mountain climbing skills. Zizka’s image 3,954 (p. 230) shows him at the “height” of his powers.

While this book is a delight, there are a few places where the author and editors might have done things a bit differently. Photographers often want to know more about the technicalities of an image — aperture, shutter speed, and ISO (International Standards Organization) settings, for example. Adding this information to each image might well have introduced too much text to the beautifully clean photo pages, but an index at the back with these details would have been a nice touch.

I would also have appreciated some curatorial paper trail as to how the ordering of images was determined. How to do so without taking away from the flow of images would surely have been a tricky problem. Again, an index at the back of the text might have been employed. Perhaps something as simple as a list of images and the date taken would help readers see better how Zizka’s process developed and changed over time.

But these are mere quibbles that in no way diminish from the power of this beautifully produced collection. Indeed, some might argue that this type of curatorial structure would prevent the images from standing on their own and speaking uniquely and individually to readers.

The Canadian Rockies: Rediscovered is a look into mountain landscapes that evoke wonder, delight, and awe. It stands as a personal reflection of how one photographer’s process has developed and changed over time. As well, it is a call to the creative landscape photographer in all of us, a call to step up and express in images what some of us feel deeply about the land around us.

As Galen Rowell (1940-2002), another photographer and mountaineer of towering talent, famously observed, “You only get one sunrise and one sunset a day, and you only get so many days on the planet. A good photographer does the math and doesn’t waste either.”

In The Canadian Rockies: Rediscovered Paul Zizka is putting his time to extremely good use – and those of us who love the mountains are glad of it.

Mary Sanseverino is a teaching professor emerita from the University of Victoria’s Computer Science Department. She is also a research associate with UVic’s Mountain Legacy Project (MLP). Hosted in the School of Environmental Studies, MLP’s goal is to rephotograph as many of Canada’s historic mountain images as possible http://mountainlegacy.ca/  Pairs of historic and modern images are then aligned, presented, and analyzed for landscape-level change. As an MLP team member Mary has hiked, climbed, and scrambled through much of the Canadian mountain west to stand in the same place as historic photographers and surveyors, and to rephotograph their work. Mary also assists in editing, curating, presenting, and writing about the historic and modern images. An active member of the Alpine Club of Canada, Vancouver Island Section, Mary can often be found pursuing her own photographic mountain projects when not out with MLP.