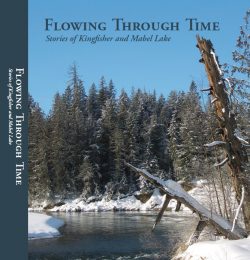 Probably the majority of British Columbians have never heard of Mabel Lake. And most of those who claim they have would have heard of it would have a hard time telling you exactly where it is.

Lots of Albertans go there, whether Rachel Notley approves or not. Named after Mabel Charles — daughter of HBC Chief Trader William Charles, in charge of nearby Thompson’s River Post (Kamloops) from 1868 to 1870 — Mabel Lake is on the Shuswap River east of Enderby and north of Lumby.

Reviewer Ken Mather, while longing for a proper map of the Mabel Lake communities and ranges, judges this “an excellent local history.” It’s a neighborhood bestseller, and we’re glad to recognizes its existence and importance with a full-fledged review — Ed

One of the signs of the coming of age in the communities of Western Canada is the plethora of local histories that have come out in the past few decades.

These collections of family histories and community vignettes are often viewed with scepticism by professional historians, who prefer primary documentation rather than recollections. But popular historians, among whom I count myself, find them a treasure trove of first-hand accounts and anecdotes. 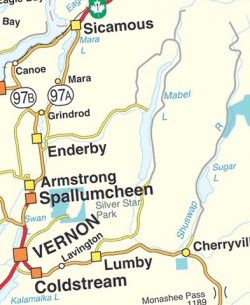 Quite often local histories provide the human interest stories that give flesh to the bare historical facts and help to provide a more complete picture. The stories of each family, most often told by one of their members, tell of the hardships and challenges endured by the first Euro-Canadian settlers in an area, and make for interesting “grass roots” history.

Flowing Through Time is very much in this genre. After a brief overview of “Early Settlement,” the book is organized by the communities found east of Enderby, B.C. toward the north end of Mabel Lake, namely Hupel, Kingfisher and the eponymous Mabel Lake, B.C. Then it continues with chapters on “Kingfisher Organizations,” “Hunters Range” and the “Forest Industry.”

As an inhabitant of the North Okanagan since 1984, I have spent many a happy summer day at Mabel Lake, fishing, canoeing, or just lounging on the beach. But the lake has always been the destination, with Hupel and Kingfisher only as roadside signs and places like Hunters Range little more than a mecca for snowmobile enthusiasts. This book filled my knowledge gap by telling the stories of the people who made those communities their year-round homes.

The entire second half of the book, “Families,” is devoted to family histories, arranged alphabetically. The large-format book is extremely thorough in its coverage, containing 74 background accounts by at least fifty different individuals and 91 family histories, most of which are from family members. This is a huge number of stories to compile and must include every family that ever lived in the area, and must have taken years to collect.

For me, one of the surprise discoveries in the book was that beloved Canadian novelist, W.O. (William Ormond) Mitchell, was one of the regular summer inhabitants of the west side of Mabel Lake. He purchased a lot in 1961 and completed construction of his cabin in 1963. W.O.’s indifferent construction skills meant that the cabin was, let us say, unique in its details and perfect in appearance.

The account of the Mitchell family’s many summers at Mabel Lake, written by W.O.’s son, Hugh, is a delightful and often hilarious glimpse into the larger than life legend of Canadian literature and worth the price of the book on its own.

Obviously, the target readership for the book was intended to be the families whose stories are told, sometimes in great detail. But for outsiders, aspects of the book can be puzzling. I must confess that I came away from the book still a little confused about the geography.

The sub-title, Stories of Kingfisher and Mabel Lake, suggests that the book is about those two communities. But the first settlement in the area was named Hupel, and one of the chapters is devoted to Hupel.

For those who do not know the area well, the maps in the back of the book are not especially useful. Even though I have driven the road many times, I struggled to figure out just where Hupel ended and Kingfisher began, and wondered if the whole area was called Kingfisher. Hunters Range, which is dealt with in a separate chapter, did not appear on the maps at all. A full-page map at the beginning of the book, showing the locations of the communities and landmarks, would have been useful.

It’s difficult to find a lot to criticise in this compilation, primarily for and by the people in the community. It would have been nice to see some information on the Splatsin First Nations People, who receive only the briefest mention in the first section. Given the flow of salmon through the Shuswap River that still occurs every fall, their presence must have been significant at one time. The current move toward reconciliation would have been well served by some information on the Splatsin occupation of the area in question.

All in all, the book achieves what it set out to do: to tell the stories of the settlers who made this area their home. It is an excellent local history, full of interesting stories, photographs and insights into the early history of the Kingfisher area and will be a treasure to the current generation of inhabitants and many generations to come.

Ken Mather retired in 2013 after 42 years in heritage site research, planning, administration, and management. Manager of the Historic O’Keefe Ranch from 1984 until 2014, Ken is now Curator Emeritus of O’Keefe Ranch and was awarded the Joe Martin Memorial award for his contribution to B.C. Cowboy Heritage in 2015. Ken has written a large number of articles and research reports on early ranching in B.C. for different magazines and websites. He is author of three recent histories of ranching and ranching cultures in the Canadian west, all published by Heritage House: Buckaroos and Mud Pups: The Early Days of Ranching in British Columbia (2006), Bronc Busters and Hay Sloops: Ranching in the West in the Early Twentieth Century (2010), and Frontier Cowboys and the Great Divide: Early B.C. and Alberta Ranching (2013). His self-published Ranch Tales (2014) is a compilation of his columns in the Vernon Morning Star. His latest book, Trail North: The Okanagan Trail of 1858-68 and its Origins in British Columbia and Washington, will be published in May 2018 by Heritage House.