A Peakbagger’s Guide to the Canadian Rockies: North
by Ben Nearingburg and Eric Coulthard 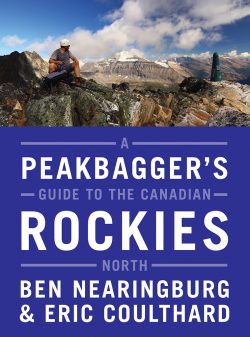 Most of the 100 routes featured are in Alberta’s Jasper National Park and Willmore Wilderness Park, but the book also contains chapters on the peaks around Valemount and in Mount Robson Provincial Park, B.C.

Reviewer Rod Szasz commends A Peakbagger’s Guide for introducing a “realm of adventure alpinism… with logical diagrams and easy-to-access information,” but he warns greenhorns, families, and weekend warriors to climb with caution: these peaks are “not for the faint of heart, the unplanned, or the unprepared.” – Ed.

Al Alvarez in his mountaineering classic Feeding The Rat: Profile of a Climber (Bloomsbury: 1988) once described mountaineering as akin to having a rat gnawing on your insides – a creature that is constantly needing feeding, rarely sated and always hungry.

But even a well-fed rat remains content only for a short time and then feels the need to get out into the hills. Climbers well know the gnawing in the guts to get on the next route.

Alvarez was concerned more with full-on technical mountaineering, but the desire for exposure and adventure, minus much of the gear, still fills the gut of many people.

Let’s face it, most people will never climb a technical mountain. Most are sport climbers who rarely venture into an alpine climb, but almost all who desire to climb savour the backcountry.

Those who want to extend the usually short sport climbs, or hike while not committing to a full-on technical mission to a large peak, enter a realm called “scrambling” — full on gut-fortifying adventure where falls can be fatal, and which require a good degree of fitness and mountain experience and more than a degree in technical rope-work.

Scrambling allows almost anyone with a reasonable fitness, comfort around heights, and a backup rope coil to fulfill their desire to conquer higher peaks.

A Peakbagger’s Guide to the Canadian Rockies: North is not the first book to enter this realm of adventure alpinism, but it does do so in a concentrated and accessible version and with logical diagrams and easy-to-access information.

Ben Nearingburg and Eric Coulthard’s book covers a rough triangle of peaks from the Icefield Parkway (Highway 93 North, between Lake Louise and Jasper) to B.C.’s Mt Robson Park, and then across into areas covering the South Boundary Trail of peaks in Jasper National Park.

All are centred roughly around Jasper as a base centre. Although the guide covers peaks accessible from Jasper Visitor Centre, and reaches as far back in as Titkana Peak on the B.C.-Alberta border, it does not include B.C.’s Mt. Robson or Rearguard Mountain, which fall into the technical realm.

The emphasis in A Peakbagger’s Guide is upon ease of access. Most featured peaks are doable in a day — though with routes of up to 30 kms, they are not for the faint of heart, the unplanned, or the unprepared.

Easy to understand, the layout is arranged by region into colour-coded subsections. Peak routes are provided with both access descriptions and very good full-view maps usually showing a dotted layout of the entire advised route.

Readers should be aware that many peak routes begin as rudimentary trails that soon disappear into natural forest and open rock. Although there is often flagging at the start, it is not something you should rely on. You need to be experienced in your route-finding skills.

A good trip can be fouled by inadvertently heading up a wrong valley or draw, only to find the correct route after a few hours, by which time there might not be enough daylight to complete the route in one day.

Route finding, a skill often underrated by weekend warriors and sport climbers, is paramount for almost all these climbs. If you head up expecting a well-beaten boot path you will, in many cases, be disappointed.

As scrambling peaks, most of the routes in Peakbaggers are rated between Class 2 and Class 4, with the hardest-rated route in the book a low Class 5. The overall terrain and difficulty of these routes is diverse and varied.

The authors make it clear that some of the lower grade routes with long approaches make for great “ski touring” on cross-country skis.

For those travelling with families, I would keep in mind that even Class 2 can be dangerous for the tykes in your group. Though some of the routes can be done with an experienced family, I would recommend keeping to the ones rated Class 2. Even this level can be hazardous; and speaking as someone who took his family along the Indian Head Mountain, the danger of rockfall even on this Class 2 was extreme.

The back of the book contains a handy table of winter peaks. Information is immediate and comprehensible. Nearingburg and Coulthard provide a rather handy season recommendation for peaks, noting better times early in the season to avoid rockfall, when to take advantage of fast snow conditions, and when to leave a route until a little later in the season to avoid avalanche danger.

The book employs UTM grid references (thank you!), as well as reference to standard Government of Canada issued 1:50,0000 maps.

Nearingburg and Coulthard also provide good caution warnings. Just because these peaks are largely non-technical does not mean that one should attempt them unprepared, lacking experience in bush craft, or unaware of wildlife hazards.

Few climbers now pack books into the outback, but this slim edition smaller format book will not take up much room in your camper or, if you’re old school, in your backpack.

Most of the routes here have very doable beginnings, which are ideal if you’re not a scrambler and just want long walks mostly on even terrain. In such cases, the guide will work for gentle hikes with your family. Travel up the route as far as you wish, or until you reach the hard part, before returning. There is still joy in getting out into the hills — and the views are almost always stupendous.

Indeed, hiking part way to the top only stimulates you to feed that hungry rat even more next time.

Rod Szasz is an inventor and entrepreneur with a love for adventure and climbing. Educated at Malaspina University-College (now Vancouver Island University) and the London School of Economics, he has spent most of his adult life outside Canada. He has climbed extensively in Asia including some of the premiere ice routes in Japan and early rock routes in mainland China, including the original Todd Skinner Routes on Moon Mountain. He now lives with his family on Vancouver Island, where he was born. There he is engaged in raising a family and summiting some of the last unclimbed peaks on Vancouver Island.