The Haunting of Vancouver Island: Supernatural Encounters with the Other Side 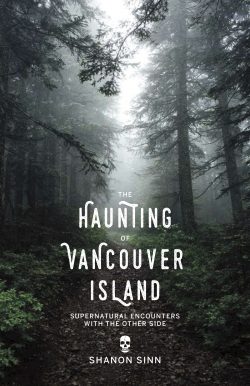 No matter our age, or whether or not we believe in the supernatural, there is something compelling about a good ghost story.

Shanon Sinn’s The Haunting of Vancouver Island is a page-turner, a lively compilation of stories, testimonials, creative prose and two chilling tales experienced by the author first-hand.

Sinn describes himself as a realist, yet as someone whose own brushes with the paranormal have left him something of a “skeptical believer.” And while he writes from a journalistic perspective, there is a thread of mysticism running throughout the book.

Diligent regarding his interview process, Sinn is careful not to impose his own opinions and judgments on the stories he shares, preferring to present the information in a clear and grounded way so readers may draw their own conclusions.

He writes of sightings involving churches, alleys, hotels, graveyards, beaches, logging roads, mountaintops and even a golf course. The ghost of Doris Gravlin, murdered by her husband in 1936, haunts the Victoria Golf Club in spring, known as the “April Ghost.”

The most significant forerunner of Sinn was the prolific poet, critic, anthologist and ghostbuster Robin Skelton of Victoria whose his public practice of witchcraft was important to his fellow Wiccans. In 1978 he was initiated into the ‘Old Religion’ by Jean Kozocari, with whom his daughter Alison had been studying, and later he co-authored, with Kozocari, A Gathering of Ghosts (1989), earning him the accolade of ‘ghostbuster’.

Skelton testified in the ‘100 Huntley Street’ witchcraft trial in Victoria and once conducted an unsuccessful ritual on Parliament Hill to convince Ottawa’s politicians to repeal the GST on books.

Sceptic or not, Sinn readily admits that there is “something” to all this. There are simply too many sightings to discount. But whether or not these ghostly apparitions are, indeed, spiritual entities, is impossible to say. Sinn does, however, present several possibilities for the reader to ponder, and the numerous ghostly sightings suggest that Vancouver Island has enough stories to keep one guessing for a very long time.

The chapters begin at the south end of the island and work their way northward. And while Sinn writes of some popular well-known ghosts, such as the April Ghost and the apparition of Kathleen O’Reilly at Point Ellice House, he takes us deep into the island’s rich spiritual history, sharing ancient ghost stories originally told by the Coast Salish, Nuu-chah-nulth, and the Kwakwaka’wakw — the first people to encounter Vancouver Island’s dense cedar forests and salal undergrowth.

Their stories are of the Wild Woman of the Woods (Dzunukwa, or Tsonoqua), the Sasquatch, as well as unusual sea creatures — not so much ghosts as supernatural creatures, which more often than not carried a special message for those who encountered them.

Sinn starts each chapter with a moody and poetic paragraph – one that whisks the reader straight into another eerie dimension altogether. It is here that the writing becomes enthralling; it is as though Sinn knows something that the rest of us do not. Take for example, the way he brings to life one of the purported ghosts that haunt Quadra Island’s infamous Heriot Bay Inn:

Rain splatters against the window as lightning flashes across the sky. The dark, empty barroom lights up for a long moment and then another. Thunder shakes the old inn’s beams. Bottles rattle behind the bar. The man slowly steps out of the darkness and onto the wooden floor in rubber gumboots dripping with water. A heavy axe is suspended from his right arm. From beneath his old-fashioned raincoat hood, dark, unblinking eyes stare menacingly. A handlebar moustache crows a snarling shadowy grin. He begins to pace back and forth, over and over across the floor….

The reader is pulled into the unsettling scene, and left there to wonder. It’s both chilling … and wonderful.

Shanon Sinn is a gifted writer whose research and journalistic writing style make for a compelling read. Open-minded, curious, and sceptical, he is also a keen observer and a respectful interviewer, and the 25 stories he has shared paint an evocative picture of Vancouver Island’s rich history, mythology, and cultural landscape. 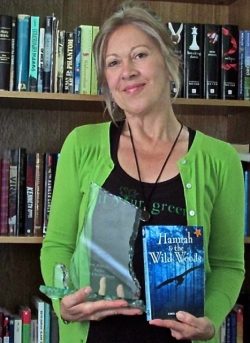