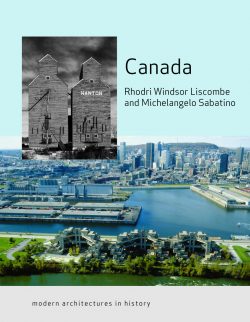 This survey of Modernism in Canada is the thirteenth volume in a series of country-by-country studies of twentieth century architecture. This one has long been anticipated by Canadian academics and enthusiasts as it both updates and fills-out foundational texts such as Harold Kalman’s History of Canadian Architecture (Oxford 1994) which, alas, is no longer in print.

UBC-based Rhodri Windsor Liscombe builds on his previous The New Spirit: Modern Architecture in Vancouver, 1938-1963 (Douglas & McIntyre, 1996) a monograph accompanying the Canadian Centre for Architecture exhibition of the same name. Michelangelo Sabatino, a professor of architecture at the Illinois Institute of Technology, has published on European modernism and on the work of Arthur Erickson. British Columbia readers might therefore be pleasantly surprised that, for a change, a Canadian western perspective can be sensed in a read of the book.

The authors open by defending their seemingly precious use of the term “architectures” in their title as referencing the “thematic scaffolding” of the survey, “a cross-section of types and activities: dwelling, learning, representing, working, constructing, consuming and recreating.” These are set against the historical narrative of Canada’s twentieth century emergence as a modern state, including its “political, financial, industrial and sociocultural evolution, including internal conflicts.” Seven chapters trace the chronology of themes, with varying emphases given to different building types from residential to town planning.

Perhaps the most telling image in this densely illustrated book is not a building. It is an oblique perspective view across the Don Mills drafting studio of John B. Parkin & Associates. Dozens of black-tied, white-shirted men are aligned across a grid of tables, pens in hand, as far as the eye can see. This brief period of early modernism marked the zenith of architectural design as a professional craft.

Every built detail was scripted, from birds-eye “presentation” perspectives of entire structures, plans and curtain-wall elevations, to fastening systems and connectors. Each component was measured, drawn and specified. Little, if anything, was left to the contractor’s imagination or the tradesman’s intuitive skill. To the historian, of course, this documentation is informational wealth. But within less than forty years the Parkin office, like many others, would be emptied by computerized algorithms.

The first chapter, “Modernity in Canada, 1886-1914” is, in fact, a compression of earlier surveys such as Volume 2 of Kalman’s History, setting the stage with a fast-paced gallop through the monuments by which major institutions (and personalities) branded themselves in the dressing of built form and style. However, what we do see emerge is the technological underpinning through advances in steel and concrete engineering of what will become the functional expression of Modernism.

The next two chapters find as their markers the World Wars. Chapter 2, “Modernizing the Dominion, 1914-1945,” traces the gradual harnessing of the various traits of European abstract expressionist style and form to signal the new emergent institutions of Canada’s post-Vimy national identity which protruded through city skylines (Darling & Pearson’s Canadian Bank of Commerce tower, 1929-31) or the conception rationalization of urban planning concentrated on monumental civic buildings (Harland Bartholomew’s “Civic Centre” for Vancouver, 1928).

Suburban Canada meanwhile supported both the technological and economic foundation for resurgent capitalism, and the reductionist treatment of modernist form and style, in no-nonsense but massively scaled industrial buildings (Eric Arthur’s Canada Packer’s plant, Edmonton, 1936). But perhaps a premonition of the dawn of mass communications and mass culture, a national identity defining moment of the period is none of these, instead the spectacular 15,000 seat Maple Leaf Gardens (Ross & Macdonald, Toronto, 1931) touted as “a world leader in heating, ventilation, plumbing and electrical appliance installation.”

“Modernism and Reconstruction 1945-67” takes its name and theme from the Advisory Committees on Reconstruction (and related conferences), late-war instruments of the federal government anticipating a need to consciously renew the Canadian national project: the economic, social, and built fabric. Programmatically, this was reflected in new foundational institutions such as the National Research Council, Canada Design Council, and the Canada Council for the Arts. On the ground this ranged from the expansion of a national highway network (and the St. Lawrence Seaway!), electronic and broadcast communications, and a national housing program to the establishment of professional civic planning departments.

Perhaps the purist expression of these initiatives was to be the found in the idealistic industrial “new-towns” such Alcan’s company town of Kitimat (Clarence Stein, planner, 1956). The architectural and planning professions themselves were to mature, especially with the establishment of new schools of architecture (UBC, Laval, Nova Scotia Technical, Waterloo). Popularization of the modern was in the hands of a raft of new publications, Western Homes and Living, Canadian Homes and Gardens, for instance. The “west coast style” in domestic design, a B.C.-based fusion of European/Scandinavian and American influences, emerged from the practices of Erickson & Massey, Thompson Berwick and Pratt, and others working with landscape architects such as Cornelia Oberlander.

“Modernism with a Punch 1945-67” focuses on the icons and iconic practices of the period, enthusiastically documented in the pages of a new professional journal: Canadian Architect.

The monuments are in scale commensurate with the size and reach of the design firms – and the egos — of this new generation of  “starchitects” Arthur Erickson and Geoff Massey (Simon Fraser University, 1963), John C. Parkin (Bata Shoes Head Office, 1965), and Eberhard Zeidler (Health Services Centre, McMaster University (1967-72), a phase ending with an exclamation mark: in the sprawling national self-congratulatory binge, Expo ‘67, Man & His World, its celebrity landmark, Moshe Safdie’s Habitat ‘67.

Montreal’s Expo and Vancouver’s 1986 World Exhibition, with its transportation and communication focus, bracket the next chapter, “Questioning Modernism, 1967-86.” The Canadian project itself comes under scrutiny: Quebec and Canadian sovereignty, the October Crisis in Quebec (1970), transfer of the last vestiges of authority from Westminster to Canada, proclamation of the Canadian Charter of Rights and Freedoms, and declaration of a new national flag.

Public discomfort with the scale and reach of the heroic modernist authority was symbolized by the sprawling extravagance of Montreal’s Olympic Stadium and Veledrome (Roger Tallibert, 1973-6) a project that almost bankrupted the city and the province, recoverable only by the institution of national lotteries.

Public reaction is framed within the emergence of the preservation movement, and democratization of design at the community level under the influence of thinkers such as Jane Jacobs. Efforts to tone-down or dial-back are represented by site-driven contextual projects such as the Beverly Lane housing project in Toronto (A.J. Diamond and Barton Myers, 1975-8) and the Pyrch residence in Victoria (Patricia and John Patkau, 1983-4).

Bulk and form emerges from the earth in Douglas Cardinal’s Canadian Museum of Civilization, 1986-9, and Erickson’s Lethbridge University (1967-72), which is slung across the side of a ravine. The megaprojects invert themselves into interior celebrations of the consumer experience, as in shopping malls such as Eaton Centre, Toronto (Zeidler Partnership, 1997-81), and the grandiloquent West Edmonton Mall (Maurice Saunderland Architects, 1981-99).

The last years of the century witness what almost seems a deconstruction of the modern project, a descent from Pierre Elliot Trudeau’s “Just Society” into the laissez-faire capitalism of the neo-liberal world-order. Digital technologies begin to disrupt business, governance, entertainment, and even consumerism (as we now witness the end of the classic shopping mall), as well the design process itself.

The concentration of capital and wealth parallels the marketed image and power of the starchitect. Under the title “Regenerative Modernism, 1986 to the Present,” the authors attempt to discern a sort-of return to basics, with a hope for a new edition of the modern. In the west they find it in the contextual work of Gregory Henriquez, low-income in-fill housing in Vancouver’s Gastown and False Creek, on a larger scale urban revitalization: Toronto’s Allan Lambert Galleria and Heritage Square (Bregman + Hamann Architects, 1990-92), or inspiration from Indigenous life-ways and traditions found in the materials and symbolic forms of the Seabird Island School (Patkau Architects, Agassiz, B.C., 1988-91).

“Canada’s Modernist Legacy,” the final brief chapter, lays out the authors’ musings over this fast trot along the trajectory of the modernist project in Canada. And they give a nod to wherein lies the future. In a current topical vein, they wonder if the reborn Liberalism of Justin Trudeau will reinvigorate a focus on people as citizens with rights to amenities such affordable housing, clean air, economic security, and a pristine natural environment.

In search of how the profession might reinvent itself, they note the Royal Architectural Institute of Canada recently launched Canada’s first on-line degree in architecture in collaboration with Athabasca University. Will the self-effacing Canadian character preserve a balance in favour of substance over spectacle, or will climate-change policies moderate the tendency to “hyper-modernism?” Will technical hubris submit to environment?

As such we are left to ponder images of the Long Studio at Fogo Island, Newfoundland (Saunders Architecture, 2011), the study model for the Canadian Museum of for Human Rights, Winnipeg (Antoine Predock, 2014), and the North West Territories Legislative Assembly (Yellowknife, NWT, Pin Matthews with Matzusaki Wright Architects, Cornelia Oberlander, 1992-94) — all interesting in their diversity of context, topography, and design as meeting places.

Liscombe and Sabatino have provided a bracing trot through the period and subject. By definition it requires surface over substance, but they stay true to their stated “thematic scaffold.” The density of case studies, examples, and references often challenge the reader’s concentration. Only in a few instances, revealing some partiality by the authors, are we treated to in-depth case analysis such as Erickson’s Rob Filberg House in Comox (1957-58), oddly not illustrated.

Occasionally we are left dangling. For instance, a brief summary of traditional design principles of Indigenous peoples is disconnected from any case studies as to where and how these might have been applied successfully or otherwise. There might have been more editorial alert for slippage into academic jargon. Commenting on the Vancouver Hasting Street Post Office, the authors opine that “it sported the ubiquitous clock dials that bespoke endeavour to compress temporal space and compute quotidian activity.” Really?

While a western Canadian perspective in the book’s authorship might be evident, it is Vancouver-centric, although the pivotal role of the British Columbia Ministry of Public Works, particularly under the direction of chief architects, Henry Whittaker, Clive Campbell, W.R.H. Curtis, and George Giles, is overlooked. Within the orbit of that Ministry a number of large Victoria firms such as those under the direction of Alan Hodgson, Robert Siddall, John Wade, Don Wagg, and others were responsible for pioneering modern design in the massive build-out of hospitals, court houses, schools, community colleges and other “public works” throughout British Columbia during the post-war years.

That being said, the authors have established Canada’s modernist architectural narrative as a major player on the international stage of the movement, and they have certainly sketched a referential canon for further commentators — students, academics, and practitioners — to explore fruitfully and with profit.

Martin Segger is a museologist and art historian whose career has included academic and administrative posts at the Royal British Columbia Museum and the University of Victoria. He has taught museum studies and art history at the University of Victoria since 1973. Author of numerous publications on the architectural history of British Columbia, including (with Douglas Franklin) the path-breaking Victoria: A Primer for Regional History in Architecture 1843-1929 (Heritage Architectural Guides, 1979), he also enjoyed a long career as a gallery curator focusing on B.C. historic and decorative arts. He currently serves as honorary art curator for the Union Club of British Columbia, and Government House, Victoria.