Georgia Straight: A 50th Anniversary Celebration
by Doug Sarti and Dan McLeod, with an introduction by Bob Geldof and essays by Mike Harcourt, Paul Watson, and Bif Naked

In February 1967, the name Georgia Straight was hatched at “The Cecil,” as it was fondly called, by two poets and two painters over a few beers. — Dan McLeod

The Georgia Straight is a Canadian legend, a giant national treasure that should — indeed must — be honoured. — Bob Geldof

I spent the summer of 1969 in Berkeley, California, and as autumn nudged summer to the margins, I hitchhiked to Vancouver and spent the night in Stanley Park. I had the choice of sleeping under the statue of Lord Stanley or of the Scottish bard and poet, Robbie Burns — I chose the latter under a full moon. Burns, inhabiting an egalitarian ethos and heralding the Romantic tradition, was a counterculture poet, just as the Georgia Straight was the agent and origin of the 1960s counterculture in Vancouver.

The Georgia Straight is, without much doubt, an icon and portal into the leftist and anarchist tendencies of Vancouver, the Lower Mainland, and British Columbia – if now in a less flamboyant manner than at its founding in 1967. Many alternative newspapers on the West Coast have waxed and waned, but rare have been those that have persisted over the decades: Georgia Straight stands in a unique and unchallenged class of its own. 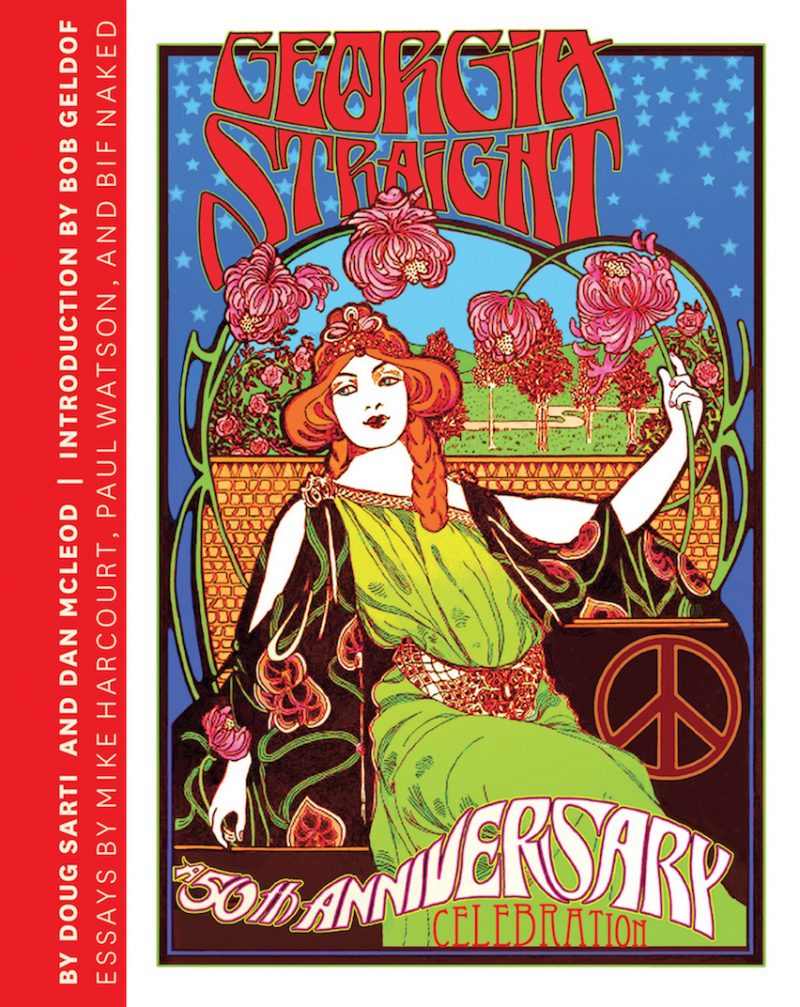 The publication of Georgia Straight: A 50th Anniversary celebrates, in a selective way, the multiple and varied literary, artistic, political, ecological, and cultural contributions that Georgia Straight has made in the last fifty years to West Coast culture and politics. Selection was a difficult matter. “Tackling a project such as this book has been a daunting and, at times, overwhelming task,” writes Doug Sarti. “With fifty years and more than 2,500 issues worth of material to wade through, the main problem was not deciding what to put in but, sadly, what to leave out.”

The journey itself was never easy, and many were the conflicts within and without, but the feisty magazine has continued as a persistent and challenging voice to the ongoing and ever shifting notions of the establishment.

It is significant that Georgia Straight was birthed in the 1960s when the counterculture was very much afoot and on the move, and Vancouver was dominated by an outspoken lawyer and right of centre establishment mayor, Tom Campbell.

Those with some memory of the local politics of the era, featuring a hard-right mayor and a growing urban counterculture, could not be more attuned to the perfect storm that was about to erupt and emerge on the streets of Vancouver and environs.

The tensions and clashes between Tom Campbell and Georgia Straight’s Dan McLeod frame, in many ways, the early years of the newspaper. The mayor and the newspaper editor represented opposite ends of the ideological spectrum, both convinced of the rightness of their agendas and neither, in some ways, able to be substantively self-critical. The other was always the enemy to be questioned and doubted.

Campbell had the blunt power of the police; Georgia Straight had the subtle power of pen and image. Such was the ongoing drama that unfolded between such antagonists during Campbell’s term as mayor, 1967-1972.

Georgia Straight: A 50th Anniversary captures, in a poignant and evocative way through the selective use of front cover images — and minimal reflection on such issues — the tensions, stories, and hot button issues of the city of Vancouver and British Columbia generally. Most of the images are compelling and graphic, layered in message and vision but often defiantly in opposition to the establishment of the time.

This well-crafted book is not only a historic overview of the Georgia Straight but also a suggestive and probing approach to an ethos and era on the West Coast and beyond. The shifts in focus of the magazine over the decades and the internal tensions are honestly noted and recorded, with the competing street papers Women’s Liberation Georgia Straight (one issue, 1971) and Georgia Grape (1972) being but two examples.

Most have forgotten that Georgia Straight was renamed or subtitled Vancouver Free Press from 1979-1981, but the time-tried memory of the name (and all it stood for) could not be easily forgotten by a simple name change — there is much in a name — and those two years made it more than clear that memory does mean something.

The Straight has continued to play a meaningful public role. Since 1982, advertisements have accelerated and the popular newspaper has been offered free. Some worried that more rigorous political commentary was being subordinated to a new identity as an entertainment and travel guide. Such emerging tendencies created soul-searching days and nights in the Georgia Straight. All this is told well and wisely in the bounty of this book.

There was a decided sense, though, that by the 1980s Georgia Straight had become its own establishment of sorts. Even Mayor Gordon Campbell declared May 5 1987 as “Georgia Straight Day,” with the paper well into its twentieth year. Gone were the days of anti-Straight mayors Tom Campbell (no relation to Gordon) and Art Phillips.

There can be no doubt the Straight has published crude, raw, silly, and questionable articles, photographs, sketches, and images — some of them reproduced here. But it has also refused to be silent on substantive and serious issues. Wheat and chaff, gold and dross, are ever mixed in this birthday book that describes, in finely coloured visual and textual manner, the ongoing life of Georgia Straight.

It would be remiss to ignore the fine yet short retrospective essays in this aerial overview of a book by Bob Geldof, Dan McLeod, Doug Sarti, Mike Harcourt, Paul Watson, and Bif Naked. All in distinctive ways have contributed to the political, cultural, literary, musical, ecological, and social scene in the Lower Mainland and British Columbia. Their compact and succinct essays contribute value, substance, and personality to this compelling tome.

The hills and vales, valleys and mountains, clear and inclement weather of the last fifty years are covered in a general and attractive manner. For those either interested in or fully committed to anti-establishment causes de jour in the Lower Mainland, this retrospective volume will be a fast-moving hagiographical historic tour, an updated bible of sorts.

Those of us who think in a more nuanced and textured manner about many of the issues that beset us then and now will find the interpretive and activist approach of the Georgia Straight somewhat thin and excessively reactive, but always valuable in a gadfly sort of way. 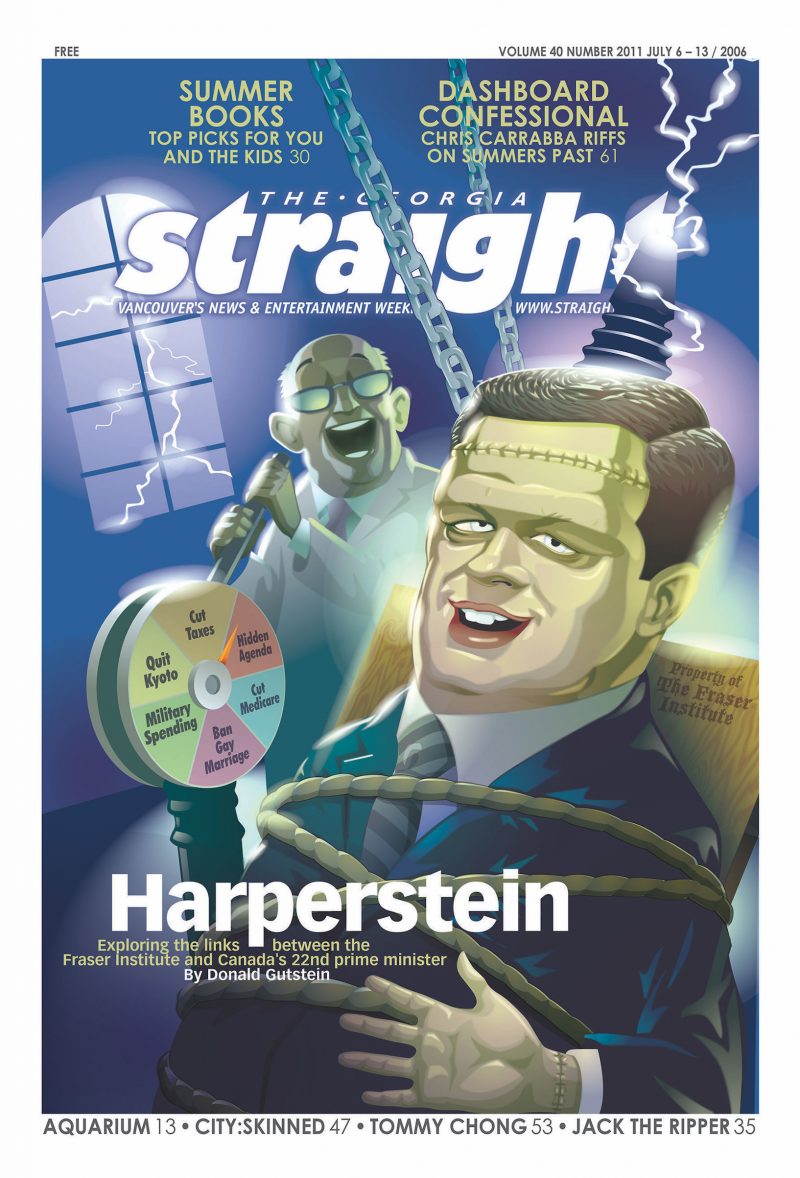 I was pleased to see transferred to the book’s hardbound fullness the interview and article Terry Glavin did with me, “Who’s a Tory Now?” or “Stephen Harper is no Tory” (February 2-9, 2006), in which I reflected that there’s a form of classical Canadian Toryism that is neither reactionary blue conservatism nor trendy progressive liberalism. To Glavin’s credit, he pondered what this might look like (p. 257).

The long shadow of the counterculture of 1967, and perhaps even the populist influence of Robbie Burns, remain on the West Coast and can be glimpsed here.