The Campbell Revolution? Power, Politics, and Policy in British Columbia

Duplicitous in terms of his First Nations policies, Gordon Campbell was likewise self-serving when it came to the arts; he championed himself as a highly literate person and presided over his own sumptuously funded book award with a costly bun-toss–while cutting funding to the B.C. Arts Council. Campbell basked in the glory of the 2010 Olympics, but it was actually Glen Clark of the NDP who brought the Olympics to B.C. In the wake of a drunk driving fine in Hawaii, Campbell prudently fled the political scene rather than risk being defeated at the polls.  He was a conservative who was tagged neo-liberal. Now academics have assessed his political career as premier in a new collection of essays edited by two University of Northern British Columbia academics. – Alan Twigg 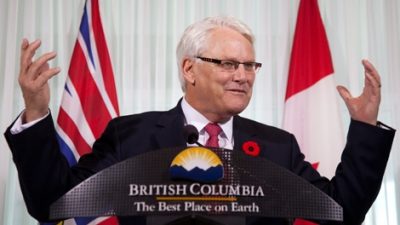 The Campbell Revolution? Power, Politics, and Policy in British Columbia is the long-awaited study of Premier Gordon Campbell coordinated by editors Jason Lacharite and Tracy Summerville from the University of Northern British Columbia.

Unlike many books on contemporary political figures, this is a serious, academic study. All fourteen contributors to the book are university and college professors or sessional instructors. The contributors make a compelling argument that Campbell, B.C.’s premier from 2001-2011, was motivated by neo-liberal economic policies, albeit oddly tempered by some progressive policy initiatives. The editors, in my view, are on less solid ground when they suggest that Campbell was also driven by “Western populism.” I will return to that below.

As premier, Campbell did not deviate much from the pattern he set out as a city counsellor in Vancouver and subsequently as mayor of the city, as Kevin Ginnell documents in “Charting Gordon Campbell’s Rise to the Top: The Pragmatic Mayor and the Politics of ‘Efficiency?’”

Some of the authors who examine Gordon Campbell’s economic policies are downright scathing. Gary Teeple writes that over the Campbell decade, “the working class and trade union movement were subjected to an extensive and unambiguous assault on the laws, social programs, and institutions that gave them certain rights to act collectively, some protection from conditions at work, partial compensation for work related injuries, illness, and death, and some degree of respite from labour market vagaries.”

In a similar vein, Gillian Creese and Victoria Strong-Boag argue that Campbell’s fiscal policies increased inequality in the province. While wealthy British Columbians benefited from deep tax cuts, “most citizens have faced compromised living standards and restricted opportunities,” they write.

Marjorie Griffin Cohen argues that the privatization of the electricity market under Campbell undermined the financial health of BC Hydro, increased costs for consumers, and led to greater environmental degradation.

While Gordon Campbell’s economic policies were clearly guided by the principles of neo-liberalism, in other areas Campbell was decidedly more progressive. The Constituent Assembly on Electoral Reform established by Campbell in his first term in office was a remarkable exercise in participatory democracy, even if his overall record on democratic reform was uneven, as Dennis Pilon suggests.

With respect to local government reform, Patrick Smith argues that Campbell’s initiatives were at least ambitious if not entirely successful. George Hoberg praises Campbell for being an innovative champion of climate policy.

In “BC’s Arts, Cultural and Creative Sector under Premier Campbell,” Duncan Low reports that Campbell cut funding to the BC Arts Council, but on the other hand his use of tax credits to “support the creative industries of film, TV, and book publishing enabled BC’s industry to maintain a leading position across the continent.”

In hindsight, the 2010 Winter Olympics proved to be the highpoint of Campbell’s political career, although as Emmanuel Brunet-Jailly notes it was actually former NDP premier Glen Clark who secured Vancouver’s bid for the Olympics.

Aboriginal policy is Gordon Campbell’s most perplexing legacy, as Yale Belanger details in his chapter. Before he became premier, Campbell mounted a very public campaign against the Nisga’a Treaty. He argued that the treaty was unconstitutional, and he challenged it in court. The BC Supreme Court upheld the treaty, but Campbell refused to concede and appealed the case. He was forced to drop the appeal when he formed the government – he couldn’t be appellant and defendant at the same time!

Campbell seemingly had a very weak grasp on Aboriginal law and, Belanger writes, “he seemed to care little about how Aboriginal leaders perceived his actions.” While he was forced to drop the legal case, he continued the fight in the political arena with his referendum on Aboriginal rights. His decision to subject minority rights protected by the constitution to the will of the majority was widely denounced, but he forged ahead regardless. Ultimately, only 36 percent of the ballots were returned, but not surprisingly the overwhelming majority of respondents sided with Campbell’s preferred policy orientation.

Then the matter was forgotten, and Campbell went on to become a champion of Aboriginal rights. He worked closely with Paul Martin’s federal government on the Kelowna Accord, which promised to invest six billion dollars to improve conditions on Aboriginal reserves. After the accord was nullified by the Harper government, Campbell proceeded to become a strong advocate of reconciliation with Aboriginal peoples.

He either experienced a deep personal transformation on this issue, or he was shamelessly exploiting the anti-Aboriginal sentiment that existed in some parts of his political base to secure his leadership and win government.

The editors charge that Campbell was a populist politician. They seem to define populism as the pursuit of smaller government and lower taxes, but those are just the defining principles of neo-liberalism. Populism, as I understand it, entails a general disposition against government (“drain the swamp”), demands that politicians blindly follow the directives of the electorate rather than exercising their own judgement, involves the pursuit of policy purely for political reasons at the expense of evidence and efficacy, and appeals to the prejudices of the people for political advantage.

With the serious exception of his early Aboriginal policy, Campbell did not engage in populist politics. On the contrary, he was a technocrat. A populist politician would never have introduced the carbon tax – the federal Conservative Party still won’t go anywhere near a carbon tax. And if he was really guided by populism, he would never have introduced the HST and allowed himself to be brought down by a populist revolt. Campbell’s embrace of the HST stands in stark contrast to Stephen Harper’s decision to cut the GST by two points, contrary to the advice of just about every economist in the country.

Over his time in government, Campbell became increasingly involved in policy, and – strangely for a democratic politician – remained remarkably detached from public opinion. Stephen Harper was just as much of a policy wonk as Campbell, but he never stopped thinking about politics. Harper ultimately overplayed the politics, while Campbell underplayed it. He seemed to forget that he was governing a province with a strong populist streak. Tracy Summerville comes closest to capturing this reality in her chapter “Riding the Wave of Available Policy Options: Gordon Campbell and the Rhetoric of Neoliberalism.”

The Campbell Revolution provides a comprehensive assessment of Gordon Campbell’s policy legacy, but ultimately the book tells us more about the political mindset of the man rather than the legacy he left for the province.

I would suggest that only his climate change policy was truly transformative. The carbon tax remains in place today, and the rest of the country is now in the process of putting a price on carbon. At the end of his decade in power, he was genuinely pursuing reconciliation with Aboriginal peoples, but he did not achieve it. That work continues.

In other areas, I would suggest that his policy initiatives were more transactional than transformative. In other words, they could be reversed by future governments. But only time will tell. And as the future of this province unfolds, The Campbell Revolution will be an invaluable resource for students of politics in British Columbia.

Hamish Telford is an associate professor of political science at the University of the Fraser Valley in Abbotsford. He is the author of Rules of the Game: An Introduction to Canadian Politics (Pearson Canada, 2014), and he has a forthcoming book entitled Talking Past Each Other: Quebec and the Federal Dialogue in Canada, 1867-2017. He is a frequent commentator on B.C. and Canadian politics in the national and international media.