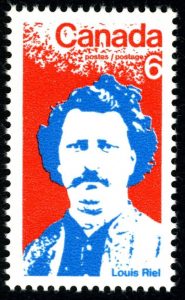 Few Canadians have been more misunderstood and controversial than Louis Riel. Now that Canadians are even re-assessing the reputation of our first prime minister, David Doyle’s Louis Riel: Let Justice Be Done is a timely reminder that official history can often get it wrong…

Even some statues of Louis Riel have generated controversy, denial, and removal. A nude statue by John Nugent (1968), to which Nugent was forced to add a burlap cape, stood in Wascana Park in Regina until it was removed from public view in 1991. It is now in storage at the Mackenzie Art Gallery in Regina. Originally located at the Manitoba legislature, a controversial nude Riel statue (1971) by Marcien Lemay and Etienne Gaboury was moved to the College Universitaire de St. Boniface in 1995. – Ed

Louis Riel wanted a public hearing. In 1885, he gave careful instructions to Father Alexis André about the publication of his own papers. Public vindication was important because he believed in the power of public opinion. As he stated repeatedly to the jurors at his trial in 1885, “my reputation, my liberty, my life, are at your discretion.”

After the verdict of “guilty” was pronounced and prior to sentencing, the judge asked Riel if he had anything to say. Riel requested a Special Commission of Inquiry to review the “various charges, slanders and lies that dogged him throughout his career.” David Doyle’s Louis Riel: Let Justice Be Done grants that wish by imagining such a commission.

Executed as a traitor by the Canadian government for leading an armed rebellion in 1885, Riel is also recognized as the Father of Manitoba and an advocate for the rights of Indigenous Peoples across Canada. In this era of reconciliation over residential schooling and a growing recognition of the material dispossession and cultural genocide of Indigenous Peoples, returning to and revisiting the career of Louis Riel seems most appropriate.

In his book based upon years of historical research, Doyle reconstructs Riel’s voice through his writings and the research of other historians.

The book collapses historical time by holding a Commission of Inquiry as if Riel were in the present. Through this narrative technique Doyle is also able to incorporate the more recent research by historians of and advocates for Riel.

A playful crossing between the past and the present, the result is an interesting experiment in creative non-fiction: Doyle provides an imaginative inquiry that “provides Riel a present day opportunity to give the testimony he was denied at his trial.”

David Doyle’s advocacy for his hero shines clear through this book. It is an unambiguous defence of Riel’s achievements and a justification of the need to recognize him as a Father of Confederation.

The subtitle, Let Justice Be Done, makes it clear that this is a clarion call for the righting of past wrongs and a rallying of knowledge to rectify injustice. Doyle sets out to give Riel the last word. Riel, as reconstructed by Doyle, refuses to recognise those who, “for political or racial reasons have purposely slandered me and my career.”

The inquiry is based on six questions: whether he rebelled against legitimate authority in Manitoba in 1869-70; whether he murdered the Ontarian, Thomas Scott; whether he solicited bribes; whether he pillaged the Hudson’s Bay Company’s Fort Garry; whether he was a fugitive from justice; whether Riel was guilty of the crime of high treason in Saskatchewan in 1885.

From this organizing principle, the first section of the book provides an almost blow-by blow account of the trial and reviews problems and issues that stemmed from this politically motivated show-trial.

The final section retells the story of the Northwest uprising that culminated in the battle of Batoche.

The book concludes by summarizing the findings of the inquiry and calling for the Canadian government to revoke all charges and recognize Riel as a Father of Confederation.

For this reader, undoubtedly the most interesting section of the book is the third, on the amnesty. In 1873, Riel snuck into the House and secretlyh signed the Members Registry, only to have to flee when he was recognized.

Readers will learn of Riel’s surprising success in gaining an amnesty for his people even while he himself was exiled. It should be noted that Doyle could have done more with Riel’s own efforts to publish his version of events in Quebec during this period. For instance, Riel’s L’Amnistie: Mémoire sur les causes des troubles du Nord-Ouest et sur les négotiations qui ont amené leur règlement amiable was published by the Nouveau Monde, in February 1874, and was widely reprinted. Riel was energetic in the French Canadian public sphere because he sought to use public opinion in Quebec to serve his interests.

Historians will quibble about the lack of references and bibliography, but Riel’s career is very well covered by academics who have long argued over this issue. Doyle’s book is refreshing in its clarity and makes a number of important discoveries.

A more interesting question is whether Doyle has been effective. Does his reconstruction of Riel’s voice appear to us as authentic? Does this experiment in creative non-fiction succeed? Phrases taken from Riel’s own writing are frequently used to good effect. Jarring phrases, for instance the use of words like “genocide,” “hegemony” and “colonisation,” are either not present in Riel’s own writing or carry a different meaning.

However, poetic license is fundamental to Doyle’s project and is used appropriately to illustrate the larger argument. In fact, were Riel speaking to us today one is tempted to conclude that he would have used the words that Doyle puts into his mouth – indeed perhaps, as has been claimed, he was born 200 hundred years too early!

At times the caricatures are too black and white, and if more characters had been introduced into the Commission’s inquiry, a more comprehensive picture would have emerged. However, it is clear that Doyle’s work is the result of a lifetime of research, learning, activism, and advocacy. For his dedication to this cause, above all, this work merits attention and praise.

Doyle’s writing is clear and the book is well edited. I read its 200 pages at a single sitting. As a reader, I found it stimulating and captivating, and I am sure other readers will find it rewarding and enlightening. The book’s sixteen full-page photographs and two maps help situate the characters and the geography of Riel’s career.

In sum, Louis Riel: Let Justice Be Done is a high calibre production and a welcome contribution to the continuing interpretation of this most remarkable Canadian.

Michael “Max” Hamon competed his PhD at McGill University in October 2017. His dissertation “The Many Lives of Louis Riel: A Political Odyssey from Red River to Montreal and back, 1840-1875” is a socio-political study of the first half of Riel’s life. He has published a new manuscript by Riel in the Canadian Historical Review. Hamon also lectures on British North America and the History of Montreal at McGill University. He has also taught at the University of Prince Edward Island.