REVIEW: What We Learned: Two Generations Reflect on Tsimshian Education and the Day Schools

In What We Learned: Two Generations Reflect on Tsimshian Education and the Day Schools, Helen Raptis reminds historians of education that not all Indigenous children were forcibly removed and sent to residential schools.

In fact, most Indigenous children in Canada attended less cruel and coercive “Indian Day Schools,” or Reserve Day Schools, at or near their home communities.

The What We Learned project began when Helen Raptis, an Education professor at the University of Victoria, found a puzzle in the archives while researching reserve day schools.

A 1947 class list from Port Essington Indian Day School indicated that it closed that year and the Tsimshian students moved to the local elementary school.

Why did that happen four years ahead of “the Canadian government’s policy shift from segregated to integrated schools for Indigenous learners”?

How did the Tsimshian youth experience the transition?

“[T]roubled by the lack of … Indigenous voices” in archival research on these questions, Raptis decided to make direct contact with the students on the class list and found many of them living at Kitsumkalum near Terrace.

Chief Don Roberts Jr. and Band Manager Steve Roberts invited her to a reunion of former Port Essington students. That meeting led to collaborative research. Twelve former students participated in interviews on their personal stories and reviewed the discussion drafted by Raptis.

Until 1947, the first generation of students, born in the 1930s and 1940s, attended the Indian Day School at Port Essington at the junction of the Ecstall and Skeena rivers and then the public elementary school.

The second generation, born in the 1950s and 1960s, attended integrated public school classes at Port Essington and at Terrace.

The Tsimshian recollections, the core of the book, are prefaced with a brief history of Spaksuut (Port Essington) and Indigenous education.

Now known as Spaksuut, Spa Xksuutks, or Spkshuut, and previously Spokeshute or Spokeshoot to settlers, Port Essington was founded in the 1870s by merchant Robert Cunningham, who opened a company town for salmon canning at a site where Tsimshian from Kitsumkalum and Kitselas camped every autumn to fish and hunt and where the 10-acre Port Essington (Spkshuut) Indian Reserve was established.

“To ensure a steady supply of labour, he [Cunningham] allocated a portion of his pre-empted land to establish a reserve,” notes Raptis. The Tsimshian worked at the cannery while also protesting Cunningham’s “appropriation of their land” by blocking the work of land surveyors in 1884.

The Tsimshian did not object when Anglicans and Methodists began missions, or when the Methodists opened a school, because the preachers and teachers included Tsimshian converts. By the 1890s the federal Department of Indian Affairs started a reserve day school, delegating its management initially to the Methodists.

The 1942 removal of the Japanese from the Pacific Coast cut the Port Essington Elementary School enrolment from 45 to thirteen pupils.

In the spring of 1947 the enrolment there was fourteen, and at the Indian Day School enrolment was ten and the teacher was retiring.

The Indian Agent arranged with the Prince Rupert School Board to admit the Tsimshian students to the Day School there that September.

In the next two decades further economic decline led the remaining families to move to Kitsumkalum near Terrace, where their children attended integrated public schools.

Port Essington itself was destroyed by two fires in the 1960s.

By contrast, reserve day schools and provincial public schools aimed to assimilate Tsimshian students to the Anglo-Canadian way of life, repressing their culture and Sm’algyax, the Tsimshian language.

Schools emphasized “numeracy and literacy” in formal classroom settings and prevented “close student-teacher relationships.” Furthermore, at Port Essington poor pay and conditions promoted teacher transiency, though there were some exceptions.

For example, Mildred (Bolton) Roberts and her younger brother Clifford often left the reserve day school to travel with their family to gather food, missing classroom instruction in the process. When the teacher singled Clifford out for punishment, Mildred defended him, and their father James Bolton complained to the Indian Agent.

Wally Miller, whose father was non-Native, attended the day school for a year — until the Indian agent made him, his mother, and sister move off-reserve. The children then went to Port Essington Elementary but Wally “chose to live with his uncle’s family on reserve,” in the Tsimshian tradition of “preparing for adulthood” by being mentored by a maternal uncle.

Members of the pre-1950s generation have mixed memories of both the Indian Day School and the Port Essington Elementary. They appreciate teachers’ efforts to provide art, music, and sports, but disliked repression of the Sm’algyax language and the harsh discipline. Tsimshian youngsters who attended schools at Terrace remember discrimination by staff and students at the elementary level while the teachers and students at high school were fairer.

Two students of this generation, Clifford Bolton and his cousin Charlotte (Bolton) Guno, chose to attend Anglican St. George’s Indian Residential School at Lytton in order to get a high school education. Clifford was encouraged to do so by four of his siblings, who were students there.

Charlotte was encouraged by the example of her father, Edward Bolton, who was the first student from the reserve day school to pass the high school entrance exam and qualify to attend high school. He had to board in Prince Rupert to do so. Edward Bolton “believed that the only way to ‘survive in a white man’s world is through getting an education.’”

Clifford and Charlotte went to classes at the public high school in Lytton but lived at St. George’s residential school and participated in some of its programs. Clifford appreciated farming, Army cadets, and the friendship of the vice-principal, while Charlotte enjoyed piano lessons given by the minister’s wife. A government official transferred her to a boarding home program in Vancouver for Grade 11 and 12 and to a commercial course at Vancouver Vocational Institute.

Charlotte regrets the split in the family that occurred when children “departed for residential school,” much as she was pleased to have an education that helped her get jobs and assist her siblings with their own educational goals.

As adults, both Charlotte and Clifford promoted the resurgence of Tsimshian culture, in their roles as Chief and Educational Administrator of the Kitsumkalum Band.

Children of the second generation group — Don Roberts Jr, Steve Roberts, Richard Roberts, Carol (Roberts) Sam, and Jim Roberts — are all from the family of Don Roberts Sr. and Mildred (Bolton) Roberts, one of the first generation participants. They attended integrated schools at Port Essington, Kitsumkalum, and Terrace.

They were not split from their family by going to residential schools, but the bus trip to town schools separated them from their elders and the Sm’algyax language and culture at Kitsumkalum.

Like the first generation members, the Roberts children recall “negative elementary school experiences,” but recollect that high school in Terrace “was somewhat better.” They encouraged their own children to acquire Tsimshian culture as well as formal schooling.

Don Roberts Jr., the eldest of this group, was born in 1952. He lived at Spaksuut / Port Essington to age eleven, learning both Tsimshian culture and fishing and hunting skills from his elders. He does not recall open oppression of Tsimshian culture in the village school himself, although he heard his elders’ stories.

However, Don’s memories of Kitsumkalum include discrimination from other students on the school bus and an “imaginary line” dividing white and Native children on the playground. Don’s father had to intercede so that teachers would let him and his brother write Grade 7 exams.

At high school, Don met “teachers with different attitudes,” and “the kids got along.” Don became a commercial fisherman and band chief.

Don’s siblings have few memories of camping with elders near Spaksuut. Their educational recollections centre on formal schooling. Richard Roberts, born in 1957, has no positive memories of schools and teachers at Terrace. But after arranging for his daughter to attend Parkside Alternative School, he saw a change for the better in the relationship of Indigenous students and their teachers.

The youngest of the siblings, Jim Roberts, born in 1968 in Terrace, remembers fellow elementary pupils calling him a “wagon burner.” He credits some high school teachers for putting him “on an academic route,” which was useful for “the fisheries work he does today.” He also notes that the values his father and uncle taught him helped deal with adult life experiences.

His sister Carol (Roberts) Sam remembers listening to her mother sing in Sm’algyax and tell family stories, though she did not teach her children the language she had been forbidden to speak at school. Like Jim and Don, Carol recalls that some high school teachers built “good relationships” with Tsimshian students, and she became “the first in her family to graduate from high school.” Like her siblings, she supports the revival of Tsimshian culture. 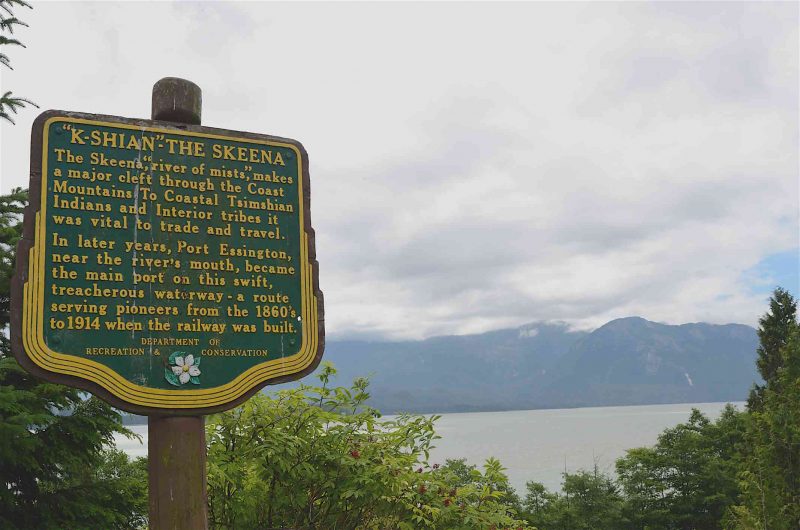 Raptis concludes that for the post-1950s generation, “their parents’ choices not to raise their families ‘in the Tsimshian way,’” owing to their experiences, “could not protect children from … discrimination.” Yet those youngsters “transitioned successfully to adulthood.”

Their negative experiences subsequently “influenced them to reclaim their heritage for themselves and for their children” and encouraged their offspring to acquire formal schooling.

In her Epilogue, Raptis comments that while the stories provided by two generations of Tsimshian students answer questions about day schools and the transition to integrated schools, they “also raise issues for future consideration.”

In particular, Raptis calls for historians to pay attention to day schools, which were the institutions that most Native students attended. She also invites “historians to look beyond the shadow of the residential school and to explore broader notions of Indigenous education — across time and place — in order to create a more comprehensive historical portrait of Indigenous education.”

I must congratulate Raptis and her Tsimshian co-authors for What We Learned. For a start, it is a great collaborative history project. The authors bring forward a rich tapestry of student experiences in reserve day schools, residential schools, high schools, and integrated public schools from the 1930s to the 1990s.

Raptis and her collaborators challenge not only histories of Indigenous education that centre on residential schools, but also histories of British Columbia centred on white settlers.

What We Learned will be a significant resource for those seeking to widen and deepen conversations on our shared past.

Jacqueline Gresko is a teacher, researcher, and writer of British Columbia history. She is Faculty Emerita at Douglas College and a lecturer at St. Mark’s College at UBC. She has researched Roman Catholic missions to Indigenous Peoples, residential schools, the Fraser River Harbour Commission, the recollections of Susan Allison, and the letters of Mary Moody. Her current projects include the Catholic Sisters who taught Japanese students during the Second World War, and, in partnership with Anita Bonson, the Royal Engineers who settled in British Columbia. With Richard Howard, she co-authored Fraser Port: Freightway to the Pacific (Sono Nis Press, 1986). She researched and wrote Traditions of Faith and Service: Archdiocese of Vancouver 1908-2008 (Archdiocese of Vancouver, 2008). She contributed articles to collections, such as Changing Habits: Women’s Religious Orders in Canada (edited by Elizabeth Smyth: Novalis, 2007) and to the Dictionary of Canadian Biography, the Encyclopedia of British Columbia, and the Oxford Companion to Canadian History. While serving on the executive of the British Columbia Historical Federation she negotiated digitization of its past publications and revision of British Columbia History magazine.