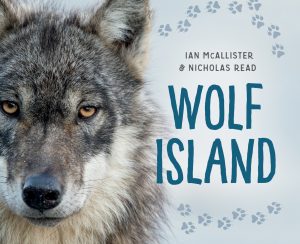 It is one of four non-fiction books in Orca Books’ Great Bear Rainforest series — books for children focusing on the natural world of B.C.’s 21-million acre coastal temperate rainforest that stretches from Discovery Passage in the south to the border with Alaska in the north.

Wolf Island is the story of a young wolf’s departure from his pack and his search for a new life of his own. In simple yet compelling language we follow his journey as he learns to survive, and eventually thrive, on one of the many islands that make up the vast and diverse coastline of the Great Bear Rainforest.

This book is a treasure. From rain to ravens, from sea to salmon, it’s a quintessential West Coast delight. You can smell the salt and cedar, you can hear the waves as they pummel the shoreline, and you can almost feel the chilly morning mist upon your face.

McAllister’s photographs are stunning. Each one captures the mysterious and elusive nature of this unique subspecies of sea wolves, as well as the rugged and unspoiled beauty of this special part of the central coast of British Columbia. 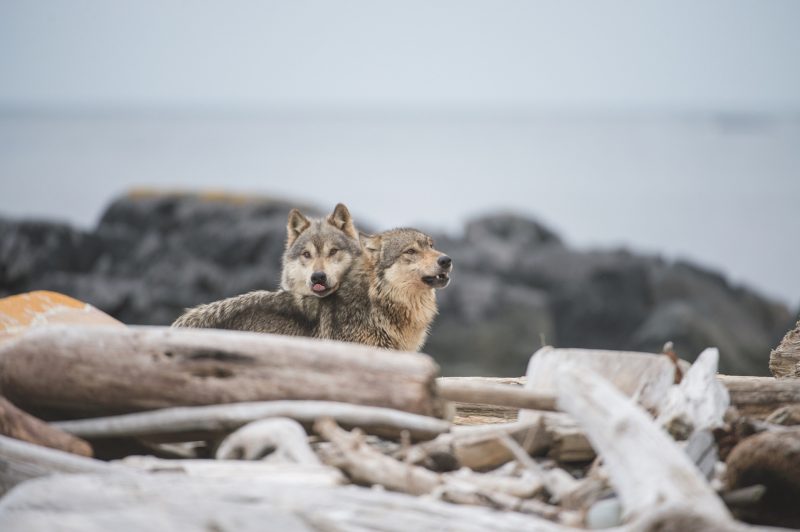 The book’s photographic palette is easy on the eyes. Each page is a celebration of blues and greens and greys, and every image feels as though it is telling a story all its own.

Readers, young and old, will be rooting for our lone coastal wolf. They will cheer him on as he overcomes both physical and mental challenges to establish himself on his new and unfamiliar island.

Not only will younger readers find themselves invested in his journey and his quest to find a mate, they will learn some interesting facts about coastal wolves in general. They will learn about pack structure, hunting habits, and perhaps most fascinating of all, the finely tuned social instincts that ensure the survival of their species.

The coastal wolf is a smart canine and, over the years, has adapted well to the wild coastline he calls his home.

Ultimately, young readers will finish this down-to-earth story with a greater understanding and appreciation of the Great Bear Rainforest as well as the important role played by forest, ocean, and wildlife in this beautiful and ecologically sensitive part of our world.

Wolf Island is also educational and up-to-date. Readers will learn that the coastal rainforest could just as easily be called the Great Salmon Forest.

Tom Reimchen of the University of Victoria discovered a salmon nitrogen “signature” in the trees surrounding salmon rivers caused by bears, wolves, and other scavengers that carry salmon carcasses into the adjacent forest where their nutrients are absorbed into a diversity of plant and animal life.

This discovery is reflected in the following passage:

The island wolf was thrilled to see the salmon. He knew they would keep coming for months, and he would keep eating them. What he didn’t realize was that when he ate the salmon, he fed the rainforest too. What he didn’t eat, the birds ate. And what the birds didn’t eat, insects and worms ate. They, in turn, enriched the rainforest soil by breaking down what was left of the fish into fertilizer, which then nourished the tall trees growing out of the soil. Every bit of the salmon was used by someone or something. Nothing was wasted. In nature, nothing ever is.

A treat for the senses, the eyes, and the young intellect, Wolf Island will be enjoyed by avid readers, artists, nature lovers, and photographers of all ages for years to come.