#15 Thruppence for your thoughts 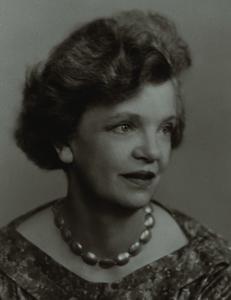 In 1944, Sylvia Thrupp expressed her belief that knowledge of local history is “essential for any one who professes to have a realistic approach to the political problems of the day.”

Consequently UBC historian Sylvia L. Thrupp penned an article [below] in which she follows local history back to its roots in the economies and neighbourhoods of the medieval European past, then she brings the idea forward to British Columbia, emphasizing its importance in a young province. She notes that B.C.’s earliest European settlers began collecting artifacts and evidence of their presence and work here almost within a generation of their coming.

Sylvia L. Thrupp was UBC-educated historian in B.C. from 1925 to 1944. A friend and colleague of hers, Raymond Grew, of the University of Michigan, once admiringly recognized Sylvia Thrupp’s ability to thrive in male-dominated academe and he provided a concise summary of her professional career.

“Thrupp had made her way in a scholarly world reluctant to grant women permanent positions, battling without bitterness for ideas more than status. Born in Surrey, England, in 1903, Sylvia Thrupp immigrated to British Columbia with her family when she was five. She received her BA from the University of British Columbia in 1925 and her MA in 1928. After teaching in high schools in British Columbia from 1926 to 1928, she went to England, receiving her Ph.D from the University of London in 1931 and remaining abroad as a postdoctoral fellow until 1935.

At the age of 83, she married a fellow medievalist, Joseph R. Strayer, who had retired from Princeton, and spent a happy year with him there before his sudden death. She then moved to California to live with her nephew, Dr. Lauri Thrupp. Publications and awards can hardly capture, however, the importance of her personal ties to leading scholars in many disciplines, her influence on students and colleagues, her gift for friendship, and the delight of her charm and irrepressible wit. All of that is remembered with gratitude by all who knew her.”

The Pedigree and Prospects of Local History

The writer of local history is to-day deservedly receiving more and more recognition. Thanks to the part that his more dramatic findings can play in arousing the historical imagination of children at school, and to the attention that is paid to his subject in research-work directed from universities, a growing number of people now take an interest in the background of the communities in which they live. The subject has always a certain romantic colour; it appeals to local patriotism, and it has also, to students of history and sociology, a more serious appeal. This serious interest in the evolution of community life is essentially modern. The writing of history was for many centuries guided by quite different ideas. One can therefore best appreciate and understand the position and importance of the study of local history by looking backward over the long procession of writers and thinkers who throughout the ages have sought to interpret past experience.

Men’s outlook upon history has always been conditioned by the attitudes and interests of their own time; this has been so from the very beginning. When a consciousness of the past first began to dawn within our Western civilization warlike and predatory peoples were playing a dominant role. Tales of adventure—recited either in prose, or in verse, which was more easily memorized—were everywhere popular. In the circumstances any one who wished to arouse interest in the past naturally tended to fasten upon the adventures and deeds of great heroes

and leaders. Memories of the past were inevitably shaped into stories, and were handed down in the form given them by the more dramatic story-tellers. When professional story-tellers and poets appeared, another influence was brought to bear upon the shaping of historical traditions. For the audiences best able to reward these men were to be found at the courts of kings and chieftains, and here the subjects most in favour were the valour of the leader and his nobles and their ancestors. Since in all warlike and aristocratic societies people have held blood and ancestry in more or less superstitious reverence, the minstrel who could spread abroad the fame of a leader’s ancestors might very greatly enhance his prestige. Thus early written history inevitably came to focus upon the fortunes of the great, the holders of power.

But fortunately, early in the development of the great kingdoms and empires of the ancient world … it became the duty of certain officials to compile a record of major public events as they took place, year by year. Such annals made dull reading, but their value grew with their length. They preserved and symbolized, for governments and dynasties, the accumulating dignity of age and lineage; besides, they were of practical use. To be able to refer back to exact records was a convenience, and sooner or later a necessity, in the work of government. Hence a care for truthful records of many kinds arose…. The cult of local history grew up among the bourgeoisie of the medieval towns. The people of the medieval towns, crowding together for security, century after century, behind their encircling walls and moats, generated among themselves an extraordinarily intense spirit of community. It grew and found expression in long and tenacious struggles to win rights of self-government from feudal overlords, in the adoption of laws and customs different from those of the countryside, in the triumphant enforcement of the custom that all residents of the town acquired the status of free men. Pride in local traditions was in the very atmosphere. Every street and market-place, every church tower, had its dramatic associations with the past….

The vigorous and neighbourly sense of community which was a part of their character as townsmen enabled them to portray a wider sector of local life than any other historians had yet had the power to describe. For example, here and there they would fill in a few lines with journalistic jottings of matters of human interest that had evidently been the talk of the town. They note the bolder local crimes, crimes committed by women, sensational damage done by storms in the neighbourhood, the nature of local epidemics, as how one summer many people were ill of a flux that came from eating too much fruit….

It was soon realized that only through the winnowing of local traditions and records could sound and reliable national history be written…. It is evident that history, both local and national alike, was a means of enriching and widening the sense of citizenship….

The cultivation of local history did not come into its own again until the rapid social and economic changes of the nineteenth century aroused an interest in the social and economic aspects of the past. In many places amateur historians had come to realize the great importance of economic changes in their own localities long before the professional historians had grasped their importance in the national life…. Their work gradually made available a great variety of records that dealt in one way or another with economic life, or with gossipy details of private social life in past generations…. It is probable that without the work of pioneer local historians the appearance of any satisfactory interpretations of national economic development would have been very considerably delayed.

It is not merely in connection with specialized economic studies that historians have found it necessary to take account of local changes. The old idea that the political and constitutional history of a nation could be written satisfactorily on the basis of the records of its wars and its laws, its parliaments, revolutions and reforms, died hard, but is now safely in its coffin….Even the more popular type of historical writing, the kind that bases itself on biography, cannot afford to ignore the work of the local historian. The notion that the gist of a nation’s story is contained in the life and character of its great statesmen and generals is true only in a superficial way….

Since great numbers of their fellows hated, loathed, and despised them, one may still ask why such men were thrown upon the central stage of power. And to answer that question one must turn to the little country towns and villages, to scenes where there were probably no great figures at all, but where the impact of unwise government policies, of official corruption, of sacrifice in war, or of gradually changing conditions—the rise of new occupations, new families and classes, and the decadence of old, were creating social tension and cutting channels for new ideas. Every aspect of general history is inevitably bound up with the slow currents of change at work in the local community.

Most modern corrections of the errors in fact or interpretation that are to be found in the work of the older historians are based upon increased knowledge and understanding of the diversity of local conditions…. Every type of record

that survives from the past is pressed into service—not only the vast files of government and municipal records in public archives, but the intimate letters and diaries of private people; family housekeeping accounts; the business letters and accounts of merchants, bankers, industrialists, and stewards of landed estates; wills, inscriptions on tombs; the inventories of old libraries long scattered; ecclesiastical records; school and hospital records; not to mention early newspapers and handbills and literary material of every kind. It is beyond the powers of a single scholar to master all the materials that are needed to illustrate truthfully the varied aspects of life in any historical period. The writing of history is therefore now essentially a co-operative enterprise. It progresses only by virtue of a working partnership between the general historian and the specialist in local research.

Looking back over the evolution of his craft, the local historian may well feel proud of the long cultural traditions that he inherits and represents. Medieval townsmen, politicians and patriots of the Renaissance, seventeenth and eighteenth century seekers after truth, and nineteenth century social philosophers, have each in turn practised it with similar and perpetual delight, but guided by ever-widening horizons of thought and aspiration.

On this continent the local historian has had the advantage of enjoying the whole of this heritage with almost none of the trouble that was involved in creating it. He has been spared the heavy labour of research in damaged medievaI records written in bad, semi-legible abbreviated Latin, and has been spared the reproaches of those who have no patience save for modern history.

Although a very great amount of work remains to be done, it should not, in these circumstances, take very much longer to round out the history of national development. But when this task is approximately finished, when all the documents in all the archives have been made to yield up all the economic, political, constitutional or biographical facts that bear upon the national development, when all the important sources now mouldering in the cupboards and basements of lawyers’ offices and business firms have been tapped, what will the local historian do? What will become of him? Will he be regarded as a useless relic of the past?

It is sincerely to be hoped that he himself will never take this view, for there will always be vital and absorbing work for local historians…. We live in a day of mass movements, of unprecedented possibilities for good or evil through the mobilization of public opinion. The study of shifting attitudes, opinions, and values is already of far more than abstract academic interest: it is essential for any one who professes to have a realistic approach to the political problems of the day….

This article, compiled by K. Jane Watt, has been excerpted from long article written by Dr. Thrupp and published in the British Columbia Historical Quarterly in 1944. For access to this and other digitized copies of BCHQ and its successor magazines, follow this link: http://bchistory.library.ubc.ca/